With the annual China Community Days approaching (Aug. 5-7), we thought we’d take a look back to the “olden’” days of the town of China.

Looking at a copy of the 1880-81 annual town report, it was interesting to see how much things have changed in the last 135 years. 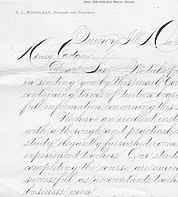 Later in the report: “The bill which was incurred last year against Benton or Waterville for the support of the Fitzgerald family remains unpaid. The prospects are now that Benton and Waterville will refer the case without expense to China. If they should not refer or settle, we would advise an action to be brought at once.”

The town poor farm was an entity of much activity. In the 1880-81 report, it was stated, “the present number of poor on the farm is nine, and the average number has been 12. George Lord and the wife of Melville Moore (editor’s note: notice how her name was not used) are sick with a fever, in the city of Augusta, and chargeable to this town. We contracted with Mrs. Edwards, of Jackson, for the support of Ellen A. Turner and child (remember how the town had paid for her divorce earlier), and we are to pay Mrs. Edwards $26 for their support for one year.”

They also seemed to struggle with valuations back then, also. “The state valuation of our town, for the past 20 years, has exceeded its proportion with other towns in the state. Last year, we secured a hearing before the State Valuation Commissioners, and were granted a reduction of nearly $80,000. Although this amount was not as much as we asked for, yet, when we consider that the total valuation of the state has been largely increased, the relative reduction will considerably exceed the above amount.”

The report of the superintendent of schools took up nearly half of the 18 pages of the town reports.

Selectmen did school-by-school, teacher-by-teacher evaluations using an agent. China at the time had 22 schools.

From the 1881-82 report, they had nice things to say about most of the teachers, for example: District No. 12. “Miss Carrie Worthing, of Palermo. Miss W is a very fine scholar and a thoroughly practical teacher. She has a love for the work and an unflagging determination to succeed. Although this school is small, it has among its numbers some excellent scholars.”

From District No. 11 of that same year: “ Nantie L. Marden, of China, who labored under many difficulties; there being trouble in the district, which showed itself in the schoolroom. Althouth the school was very disagreeable, Miss Marden showed a strong determination to teach the term through. which she did, much to her credit.”

One report that praised one teacher while scolding others was from the 1881-82 report, in District No. 9: “Summer term by Olive A. Wiggin, of Albion. Miss Wiggin has order, system and thoroughness combined in her schools. The closing examination showed that rules were not used so much as principles; if more of our teachers would follow her example in this respect, much more would be accomplished.”

And then, there were the not-so-flowery reports, such as this one from the 1881-82 report: “ From 1883-84 report, District No. 3: “Miss M. Stella Fall, of Albion: Miss Fall was well qualified to teach all of the branches to be taught in this school. At our first visit the school was a little noisy, and we were somewhat anxious about what the discipline would be. At last visit we found the teacher laboring faithfully to keep her pupils interested and busy, and that the reins of government were being drawn more closely. The reading classes received good instruction, being taught correct pronunciation by the sounds of the letters. We predict for Miss Fall a successful future as a teacher, providing she pays a little more attention to the discipline of her pupils.”

In the 1880-81 report: District No. 16: “Miss Mary W. Clark, of China, who has been known for many years as one of our best teachers, and she needs no encomium of ours. We learned last year that there has been for a long time ‘a bone of contention’ existing in this district, the cause of which is unknown to us. The trouble (if we may be allowed the comparison), appears to be like a volcano, which sends forth its fire and smoke at intervals. During the summer term the volcanic fire smouldered, and the term was a success. We hoped the fire would continue to smoulder, and eventually die out. But an eruption took place, the flames burst forth at the commencement of the winter term, thereby rendering it profitable only to a few. Will the good people of this district try and settle these troubles once and forever?”

A summary of the schools in the 1880-81 report showed this: “For many years we have thought that our schools were not attaining proficiency in writing they should. We believe one great hinderance to their progress was in following no regular system. A new impetus has been given this year to writing by the introduction of the Spencerian system, and we hope that this long neglected, though important branch will receive in future careful attention from those who have the care of our schools.”

The summary of 1881-82: “The schools through town during the past year have been geranally successful: a deeper interest on the part of the parents would have made them more so.”

And from 1883-84: “As a whole, your schools have enjoyed another year of prosperity. In endeavoring to give a faithful sketch of the work of your respective school, there has been no inconsiderable successful work to commend. The partial failure of any school is cause for deep regret while complete failure becomes a matter of grave import. In many of your schools…marked advancement in the majority of the studies has been noticeable. This has been due, in great measure, to the earnest efforts of the active, hard-working and conscientious teachers whose efforts have been appreciated and seconded by their respective pupils.”

Editor’s note: Spencerian Script is a script style, developed by Platt Rogers Spencer, that was used in the United States from approximately 1850 to 1925, and was considered the American de facto standard writing style for business correspondence prior to the widespread adoption of the typewriter.

With this look into the past, have things really changed in the last 135 years?