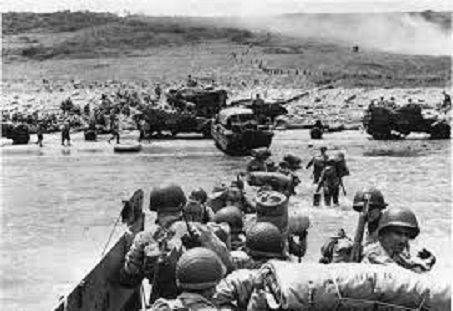 June 6, 1944, five naval assault divisions landed on the shores of Normandy, France. An assault of this magnitude has never been seen in the history of mankind. The landings sites were given code names, Utah, Omaha, Gold, Juno and Sword. The operation itself was given the code name, Operation Overlord. There were 7,000 ships with landing craft manned by over 195,000 naval personnel from the eight allied countries. England, Canada and the USA supplied more than 133,000 troops. During this landing 10,300 troops were casualties of war. By the end of June more than 850,000 men and 570,000 tons of supplies and equipment were involved. Also 148,000 vehicles were used.

Allied forces held the western front and the Russians held the Eastern front. All of Europe was involved. This would be the one time in history that all of Europe was united, and race, ethnicity, color went unnoticed. For me it seems so strange that we are united in war but divided in peace. We should have learned something given this great unity.

There are many brave men and women buried on foreign soil. Although this is sad the burial sites are very well maintained, respected and protected. On May 7, 1945, German General Alfred Jodi signed an unconditional surrender at Reims, France. The President of the United States Franklin D. Roosevelt, on a hand written note, gave total authority for Operation Overlord to General Dwight D. Eisenhower, who would eventually become president of the United States.

World War II actually began on September 1, 1939, when Germany invaded Poland. This horrific war lasted until September 2, 1945; claiming hundreds of thousands lives. Two days later September 3, France and Britain declared war on Germany in defense of Poland. World War II became a global war with Japan and Italy joining Germany and the United States eventually joining when things became tough for the now known allies. Democracy and freedom was the theme and the avoidance of world dominance by an evil dictator, Adolf Hitler. However, if it hadn’t been for the USA we would be looking at a different world today.

So as you can see by going back in history D-Day and Normandy became famous dates, places and events. Once again we must remember our veterans, especially those who gave it all. The greatest sacrifice given for God, country and family is one’s life. I don’t believe any soldier, land, sea or air ever intended to die but were prepared to do so if it became necessary. Older Americans have a family member in their past who perished because of events such as D-Day and its aftermath.

Currently we and the world are on very shaky ground and very close to world conflict, again, yet many of our leaders aren’t paying attention. Some of us see, remember and worry when we see what is happening in our country and around the world. When you start to count your allies it’s time to worry and pay attention to the big picture. If world peace is disrupted again can you count on those around you? Does everyone truly love these United States? Keep freedom in your sights on this D-Day and freedom in your heart. May the good Lord bless and keep you and yours safe and free from another D-Day. God bless America.