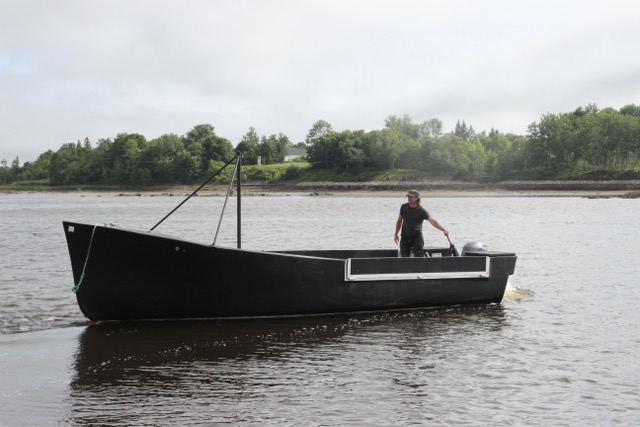 This new boat design, by Dave Olson, is a less expensive way to earn a living off the coast of Maine. (Photo by Geoff Nosach)

Amidst the lobster traps, blue and barren berried rolling hills of Harrington, Maine, forager, artist and engineer Dave Olson is re-imagining the rockweed harvesting scene. The Downeast region is known for its diverse oceanic industries, from lobster trapping to wrinkling whelks. Another emerging enterprise, rockweed harvesting, has potential to bring long term viability to the working class of Washington County and is an industry often overlooked, under-utilized and inter-tidally submerged in controversy.

Dave Olson has been harvesting a living from natural resources for decades. In Alaska, he worked as a commercial salmon fisherman and briefly captained his own boat. Back east in Maine, he is seasonally harvesting periwinkles (wrinkling whelks), tipping spruce for wreaths, sheering island sheep and hunting or foraging nature’s bounty. More recently rockweed has caught his eye as having unique potential Downeast.

Ascophylum Nodosom, commonly referred to as rockweed, is an abundant resource in the Gulf of Maine. At the top end of the market it is used for animal feed. When added to feed, it is said to improve hoof strength, make healthier egg yolks and increase dairy yields. Recent research at UC Davis has even found that methane emissions from cows diminished by 30 percent when adding seaweed to their feed. Other research has shown emissions falling closer to 60 percent.

Typically, rockweed is harvested manually with cutter rakes from small boats or by expensive mechanical harvesters. Canadian owned Acadian Seaplants Limited (ASL), the largest seaweed company in the world, operates in Maine and utilizes both of these methods. Dave’s experiences and frustrations harvesting for ASL led him to engineer improvements on their system and to develop a new kind of boat.

This new boat is built around the notion of an independent harvester. It’s five feet longer with higher gunwales (sides). A hydraulic system powers offloading machinery and two rollers which assist with reeling in the loaded rake. Mechanical harvesters have been introduced into the industry, but they have significant drawbacks, including price. “The biggest difference between my boat and a mechanical harvester is that mine is a hell of a lot cheaper,” Dave says, and estimates that his new boat would be a third of the cost of a mechanical harvester, more fuel efficient and easier to maintain. He notes that a good manual harvester can make their wage in six hours while a mechanical harvester operator might need to put in ten. Additionally, he says, “They can work in worse weather conditions and through high tide by sending the cutter pumps deep under water.”

I asked him why he decided to build this boat. “It was clear from the first day that their operation was sloppy…and it was affecting my bottom line. Too much energy was being wasted on post-harvest handling because of inefficient machinery,” he says, and describes a system where harvesters rake weed into small boats, motor to a landing and then must wait in line for a clumsy offloading process. He could only work between the tides and this delay has often kept him from going back for more. He remarks, “There was money in the rockweed, I just needed a system that would allow me to make it.”

Traditionally, ocean resources are part of the public trust doctrine which sets these assets aside for public use. The adjoining land owners don’t pay taxes below the high water mark but have certain ownership rights in order to ‘wharf out.’ The Maine Supreme Court has recently weighed in on the matter of seaweed ownership, siding with property owners who believe it belongs to them. The court declared that the upland property owner had exclusive rights and harvesters would need permission to remove rockweed. I reached out to Dave after the decision came down. He was legitimately surprised, but says, “It won’t stop the industry; it will just change how it develops.” He also says that most landowners are glad to see him harvesting and only a minority would rather it be left alone.

The people of Washington County could use this good paying work as its residents earn 23 percent less than the average Mainer. According to Dave, the biggest limitation is the lack of landing sites. “You have to have a site that a tractor trailer can access and space to land 30 tons of seaweed in bags.” If Maine companies want to compete they will need to establish more infrastructure to process and package. Of the future, he says, “I am looking to expand into volume dehydration, which opens up global markets and adds a tremendous value per ton.”

It could be that the opportunity for residents to earn living wages and establish secure businesses lies just beyond the head of tide. These opportunities are by no means confined to our rocky coast line. As Dave puts it: “I think there is a very real potential for marine algae to play a role in carbon sequestration in the effort to fight climate change.”