She attended schools in Fairfield and graduated from Lawrence high school in 1951. Known to her friends as “Pinky,” she was a player on the Lawrence High School girls basketball team where she was awarded the Babe Ruth Sportsmanship medal. She passionately followed sports throughout her lifetime, as she loved watching the UConn women’s basketball team, the Duke Blue Devils men’s team and her Pittsburgh Steelers.

Claudette married Hilaire Paquette, of Winslow, on February 19, 1955, at the Immaculate Heart of Mary Church, in Fairfield. Her marriage to an enlisted airman took her and their six children away from family and friends, moving every three years to various airbases from Maine to California. She was alone with the kids for months at a time due to Hilaire being shipped out of the country. During his year-long deployment to Vietnam, Claudette went to work at the Lestoil Plant, in Massachusetts. During this period of time, Jackie Libby (Claudette’s sister) and Maureena Sylvester, “Babysitter extraordinaire,” took turns staying with the children.

Upon Hilaire’s retirement from the service in 1972, the family moved back to Maine. Claudette continued to work as a millworker at Keyes Fibre (now Huhtamaki), in Waterville, until her retirement in 1986.

Claudette enjoyed shopping at “the K-Mart” and was especially fond of her “Thursday Date” with her son-in-law Paul, running errands, doing scratch tickets and ending the day at the Villager Restaurant, in Waterville, where she was spoiled by her friend, waitress Joann.

She loved being surrounded by her children and grandchildren, especially at her famous Christmas buffet which featured her home made toutiere pies, the kids’ favorite Banana-Split cake, and endless mounds of shrimp.

She was predeceased by her parents, her sister (and best friend) Jackie Libby, and Jackie’s husband Delford.

A family graveside service will be held on June 29, at 11 a.m., at St. Francis Catholic Cemetery, in Waterville. Friends are invited to join the family for the celebration of her life at the Winslow’s MacCrillis-Rousseau VFW Post #8835, at noon.

In lieu of flowers, donations may be made in Claudette’s name to any of the following: The Fairfield Interfaith Food Pantry, 23 Lawrence Ave., Fairfield; The Humane Society Waterville, 100 Webb Road, Waterville; the New England office of the American Diabetes Association.

Arrangements under the care and direction of Dan & Scott’s Cremation & Funeral Service, Skowhegan. 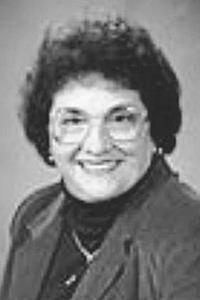 WINSLOW – Beatrice Spencer Witham, 94, passed away on Friday, May 24, 2019. Beatrice was born on August 7, 1924, in East Benton. She was the daughter of Alfred and Dorothy (Stewart) Spencer.

Beatrice graduated from Lawrence High School, in Fairfield, class of 1942. She married William “Bill” Witham Sr., of Winslow, on November 18, 1945. They were married for 39 years, until the time of his death.

Bea lived a full and active life. One of Bea’s favorite things to do was to ride motorcycles with her sons, Ron and Bill Jr. Her last ride with Ron was when she was 85 years old.

On 8-8-88 at 8 o’clock, Bea married Arthur “Jack” Poissonnier. She enjoyed many years with Jack.

When Bea graduated from high school, she started working at Berry’s Stationary, in Waterville. Her next employment was at Cottle’s Supermarket, in Waterville, which eventually became Hannaford. Bea worked there as a cashier for over 25 years. Her customers voted for her to become the first ever “Employee of the Month.” All of her customers thought that she had a beautiful smile. Her family thinks so too. On Friday nights, her checkout line went all the way to the back of the store. Her customers gladly waited for her. They would say, “She is my favorite cashier.”

He attended high school at Nokomis High School, in Newport, and Maine Central Institute, in Pittsfield, where he played football, and later received his GED from Waterville Adult Education.

Jeff spent his early years in the trees, working for Lucas Tree and Asplundh. Jeff moved on to becoming a “jack of all trades” and was regularly seen on roofs, building garages or fixing just about anything that came his way. His grandkids referred to him as “working grandpa,” which made him smile. He was always quick to lend anyone a hand, no matter what it took.

Jeff loved to spend time with his fishing pole and was never short on a good fish story. He had a passion for creating something unique for everyone. His talent for drawing, wood-burning and etching never ceased to amaze those around him. Jeff loved to bring out the guitar, especially during his favorite annual camping trip.

Jeff was able to fulfill his lifetime dream of seeing Alaska last year. He enjoyed every moment of the beautiful sights, taking endless photos. Jeff tried feeding a bear some cookies and caught the biggest fish of his life – no fish story there!

Jeff was predeceased by his parents; his brother Dan Jr., his sister Susan, two infant siblings and the best dog he could ever ask for, Bentley.

DAVID R. TRACY, 61, of Skowhegan, passed away on Tuesday, June 4, 2019, following a long illness. Locally, he is survived by two sisters, Kathleen Plaisted and husband Bruce, of South China, and Patricia Goodnow and Allen Bourrassa, of Winslow; and brother James Tracy and wife Jodi, of Sidney.

GERARD GAGNE, 95, of Fort Myers, Florida, passed away on November 14, 2018. He immigrated to Maine with his family in 1950, where he settled in Madison. He worked most of his adult life for Scott Paper Company as a foreman in the Woodsland Division.

ELAINE D. HADIDIACOS, 76, of Rockville, Maryland, passed away on Wednesday, April 3, 2019, at Holy Cross Hospital. Elaine vacationed every summer at Pattee Pond, in Winslow, where she enjoyed spending time with family and friends. She participated in daily water aerobics class at the Alfond Center, in Waterville.