Guided by veteran moderator Richard Thompson, 81 registered voters, according to Town Clerk Cathy Coyne, took less than two hours to approve the first 63 articles of their June 3 and June 11 town meeting warrant as presented. The meeting is now in recess until 8 a.m. Tuesday, June 11, when polls open in the town office for written-ballot action on the final three articles.

The longest discussion during the open meeting was over the selectmen’s request for authority to enter into an agreement to have solar power installed. Selectman John Melrose explained that by approving the article, voters authorized selectmen to go through with an idea they have discussed for several years. In answer to voters’ questions, Melrose said:

Voters authorized buying a new plow truck and a new police cruiser. During discussion of the cruiser, speeding problems on town roads and Police Chief Mark Brown’s duties, one resident expressed the hope that people driving to and from the Criminal Justice Academy would slow down.

Current Board Chairman Lauchlin Titus replied, “Libby, when I joined you as a selectperson, I didn’t know how much I’d learn about trash. Now I can talk trash with the best of ‘em.”

Titus went on to the explain that all Vassalboro trash, “to our dismay” is landfilled until the Coastal Resources plant in Hampden opens, probably in July. Once the plant is fully operational, Coastal Resources “will do our recycling for us,” he said. 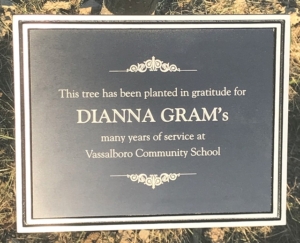 Former Vassalboro Community School Principal Dianna Gram, who retired at the end of the 2017-18 school year, was recognized for her 24 years of service. School Board Chairman Kevin Levasseur and member Jolene Clark Gamage announced a tree has been planted in the school’s front yard with a plaque honoring the principal who, Gamage said, “always was a champion of the kids.”

Gram, completely surprised, said when she was bidden to attend the town meeting, she feared she had somehow messed up the budget. Her Vassalboro job wasn’t a job, she said – “It was coming here every day as part of the VCS family.”

When the town meeting continues June 11, voters will re-approve or reject the $7.7 million school budget approved June 3; decide whether to continue the second school budget vote (called the budget validation referendum) for another three years; and elect municipal officers. Selectman Robert Browne and school board members Jessica Clark and Levasseur are unopposed for re-election.