Peter Taylor, from the town of Washington, has attended St. Denis Church, in Whitefield, for 40 years, and for him, there is no place like it.

“I just feel the Holy Spirit in this building,” he said. “It’s the community that brings that feeling to me.”

Al Parker, who has attended the church for more than a quarter century feels similarly. He said he used to travel around the country and the world for his work, but none of the churches he found compared to St. Denis.

“St. Denis is very, very unique. The people there are unbelievable. The community that we have is second to none,” he said.

Taylor and Parker were among the many parishioners who filled St. Denis Church on Sunday, June 10, to commemorate the church’s 200th anniversary. Bishop Robert Deeley celebrated the anniversary Mass (20 pictures below).

“The records of history show that there was only a small Catholic community here in Whitefield when Bishop Cheverus, then Bishop of Boston, of which Maine was a part, visited in 1812. There were perhaps five Catholics. Five years later, however, the reality was quite different. The rich farmland of the Sheepscot River Valley, available for a reasonable price, had drawn many Irish immigrants who had come to America seeking a new way of life, just as immigrants do today,” the bishop recounted in his homily.

St. Denis Church, originally spelled with two “n’s”, is the second oldest Catholic church in New England, predated only by St. Patrick Church in Newcastle. The church got its start when Father Dennis Ryan, who had been assigned pastor of St. Patrick by Bishop Jean-Louis Lefebvre de Cheverus in 1818, recognized the growing population in Whitefield and chose to move there. 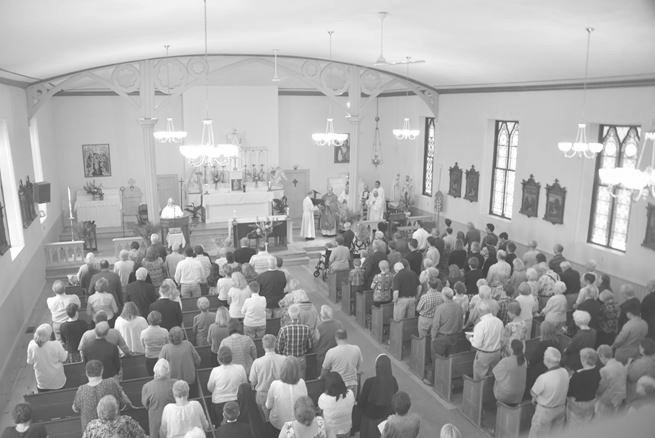 Work on the first church began that same year, and it was consecrated by Bishop Cheverus in 1822. The original church was a white, wood-framed building with no pews. People would stand or kneel on the floor.

“The first settlers knew they needed their faith, and their faith was not their own. It needed a community and a place to celebrate Mass. They knew the meaning they derived from the love of God they experienced in their relationship with Jesus. They wanted to nurture that for themselves in the harshness of winter in a new place, and they wanted to hand it on to their children. It is the legacy they passed on to you. You and I are now the brothers and sisters of Jesus in this place,” the bishop said.

The church community continued to thrive, and in the 1830s, the Irish Catholic population of the parish had grown to nearly 1,200. Unfortunately, the church also wasn’t well maintained, which caught the attention of Bishop Benedict Fenwick, the second Bishop of Boston, who visited in 1832. He urged the community to build another church, and the following year, work on the current church began.

“The Irish Catholics wanted the new church to be on the same spot as the old church, so they put the bricks right over and around the wooden church, so they still had a place to go to church,” said Libby Harmon, a longtime parishioner who researched the history and was one of the organizers of the celebration. “When they got the walls and the roof of the new brick church done, they then disassembled the wooden church and took it out through the front doors.”

The new church was consecrated by Bishop Fenwick in 1838. At the time, it was Maine’s largest Catholic church building, as well as having the largest congregation.

The church was designed like a typical New England meetinghouse, an appearance it retains today. Among the changes along the way, however, was a new Italianate-style tower, which replaced the old belfry in 1862. Around 1890, stained-glass windows were added, the sanctuary was enlarged, and decorative work was added to the walls and ceiling.

In 1976, it was entered on the National Register of Historic Places. The church underwent a major restoration beginning in 1997.

St. Denis Church is now part of St. Michael Parish in Augusta, but it has maintained its rural character, as well as its loyal congregation.

“I think one of the things that maybe is special for us is that families come from surrounding communities. It’s not like being in the city where everybody is right here. People come from afar to come here,” said Mary Caswell, whose ties to the church span four generations, since her great grandparents immigrated from Ireland. “We’ve had, over the years, to be very independent.”

“My mother, she brought us up here, and I still live in this area. It’s just very special,” said Louise Reed, Caswell’s sister.

The church was full for the Mass, as was the parish hall for a celebratory brunch.

“I’m just very, very happy to be part of this 200th, because it is so significant in the history of the Church in Maine,” said Father Frank Morin, pastor of St. Michael Parish. “People really supported it, and I’m very happy that we gave them the opportunity to appreciate again their heritage, especially the descendants of the original families, several of whom are here and who have not forgotten their roots.”

Among those in attendance were several Sisters of Mercy. From 1871 to 1888, the Sisters of Mercy ran an orphanage at a convent across the street from the church and also taught schoolchildren. Several sisters are buried in the church’s historic cemetery.

Concelebrating the Mass with the bishop was Father Morin; Monsignor J. Joseph Ford, a native son of the parish; Father Ralph Boisvert, who formerly served there; and Father Roger Chabot. Father Arokiasamy Santhiyagu, HGN, a parochial vicar of St. Michael Parish, joined the gathering for the reception.

As the St. Denis community celebrates its 200th anniversary, the bishop stressed the importance of continuing to gather for the celebration of the Eucharist, which is why the church was first built.

“As we begin the third century of Catholic life in this valley, it is a good opportunity to ask God for the grace we need to be faithful to Jesus’ invitation to be part of his family, ‘whoever does the will of God is my brother and sister and mother.’ If we do that together as Church, the Lord will be with us, and we will bring the light of Jesus’ message into our world,” the bishop said.