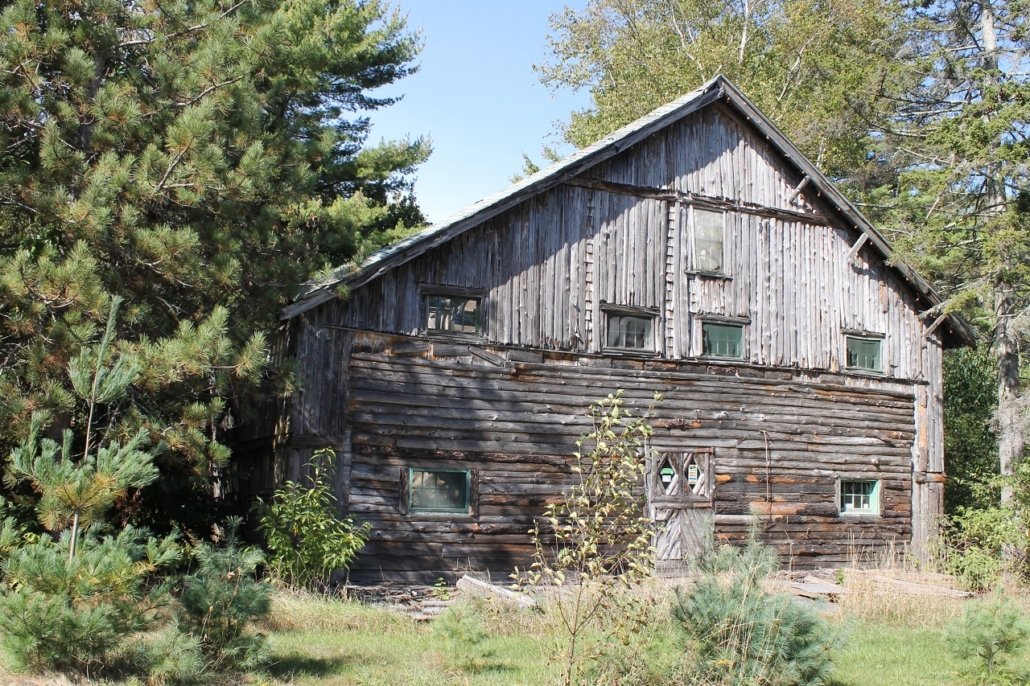 Killdeer lodge from a few years ago. (Contributed photo)

This is a reprint from The Town Line, September 18, 1999, issue, from a recollection written by Ben S. Dillenbeck in 1975 for the China Bicentennial History Book.

One beautiful clear summer’s day back in the latter half of the 1920s, my brother-in-law, Earle Eli Wagner, who lived on the Pond Road, about two miles south of China Village, desired to go bass fishing with Eli Bush, who lived on the west side of the same Pond Road.

According to Eli, they carried a picnic lunch and, when noon came, beached their boat on the long point, across the lake, to the east of the Neck. Many folks today call this beautiful spot “Lone Pine Point,” but on the map it is referred to as Killdeer Point. When the lunch was finished, Eli decided to do some exploring and climbed up the steep path into the open field above. At that time the only trees worth mentioning were in a small fringe along the shore; the remainder of the point being pasture land of the Seward, Edson and Sinclair farms. From this position, Eli saw two other higher levels of land to the east, which, arousing his curiosity, he proceeded to investigate. From the next highest elevation, which runs parallel with the big ledge or outcrop, he faced west and was thrilled by the unfolding beauty of that magnificent view across the lake! 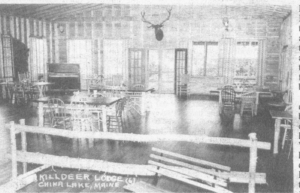 Later, as it turned out, he was to have a road here, which on the map, would be named “Mountain View Drive.” From this level he climbed onto the big ledge, where the remains of the Killdeer Lodge Dining and Recreation Hall now stand. As he looked westward he was dynamically thrilled by the awesome beauty of the giant panorama, with the East Basin of China Lake in the foreground, separated from the West Basin by China Neck – while in the stunningly clear background were, what he learned later to be, Mt. Blue [in the Farmington area]; then to the right most of the Rangeley mountains, and further to the north, the twin notch-formed profile of Mt. Bigelow, with Sugarloaf nearby. How impressed he was at the sight and how quickly he was in deciding that this was a spot which should be seen by many people! Thus, the idea of a development of some kind began to form in his creative mind. But at that time it was nameless. As he returned to his boat there were numerous small birds scurrying along the water line. Eli thought they were baby Killdeers and decided the peninsula should be called “Killdeer Point.” (Several times through the years the Killdeer have been seen by the writer, on the upper levels, but never has he seen them at the water’s edge. Birds often seen down there are commonly called Sandpipers, and, even in adulthood, are much smaller than the Killdeer. There are those who feel that Eli named the point after the wrong bird!) 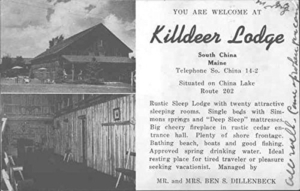 The more Eli envisioned a summer development, the more enthusiastic he became. Through his consultation with officials at People’s Bank, in Water­ville, he because acquainted with Charles W. Vigue, its president, and was able to sell him his idea of a Killdeer Point summer development. Subsequently, the Seward, Edson and Sinclair farms were purchased, totalling 250 acres, more or less. On July 17, 1929, a plot plan called “Killdeer Point Highland, China, Maine,” was recorded in the Kennebec County Registry of Deeds.

That same year, Eli made elaborate plans to start a very active promotional program. It was his idea to get as many people as he could to come here and look at what the Killdeer Maine Company had to offer. In 1929, he engaged Frank Vigue (no relation to Charles), of Winslow, a carpenter-contractor, to convert the old “Bragg Barn” (which was on the Edson Farm and which had been there since the very early 1800s) into a Sleep Lodge which would accommodate 40 persons. This old barn was transformed into an attractive, rustic, white-cedar-lined sleeping unit. That same year, Frank Vigue and his crew of carpenters built the big 100- x40-foot dining and recreation hall, with a dining room, serving room, kitchen, storeroom, restrooms and two bedrooms for personnel. Its 120 feet of porch allowed an unobstructed, expansive view of that picturesque, one-of-a-kind view to the west.

An extensive advertising program was carried out by Eli in the Boston, Providence, Worcester and New York papers in which he advertised a three-day excursion trip to China Lake’s Killdeer Point at a below cost fee, which included transportation, lodging and meals. The first prospects, 40 of them, arrived in the early summer of 1929 (probably a Friday afternoon in late June or early July) and were assigned to rooms in the “Sleep Lodge,” as Eli called it. It is vividly recalled that there were no room numbers on the doors. The numbers were cut from a big calendar and pasted on the doors where they are still in good condition after a lapse of 43 years.

The first afternoon, after arrival, provided an opportunity for guests to explore the place or do pretty much what they pleased. Then came a good dinner provided by a very efficient hard-working, pleasant person, Mrs. Harriett Martin, assisted by her granddaughter (whose name is not recalled). Florence Plaisted (who married Earl Brown) and Glenis Hall (Lawrence Hall’s sister) served as waitresses. These young ladies also assisted with the kitchen work, dishes, etc., and helped make up the bedrooms. I did the buying and hauling supplies for Mrs. Martin and supervised the booking of guests at the Sleep Lodge. 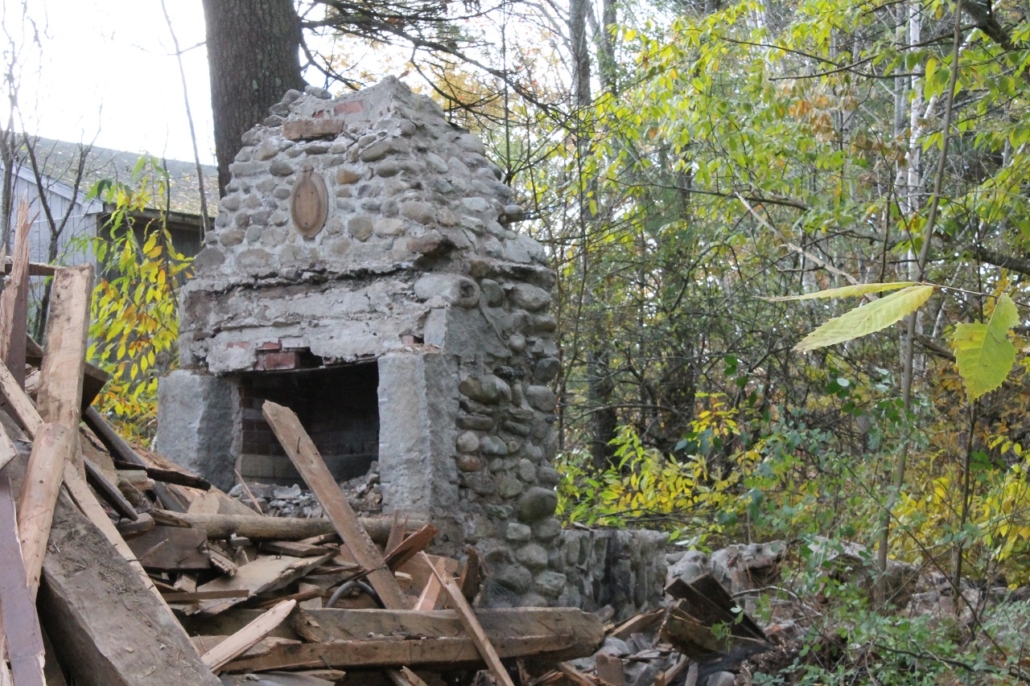 Only the fireplace remains. (Contributed photo)

Lawrence basketball teams gearing up for season FOR YOUR HEALTH: Dos And Don’ts For Managing High Blood Pressure During Cold...
Scroll to top