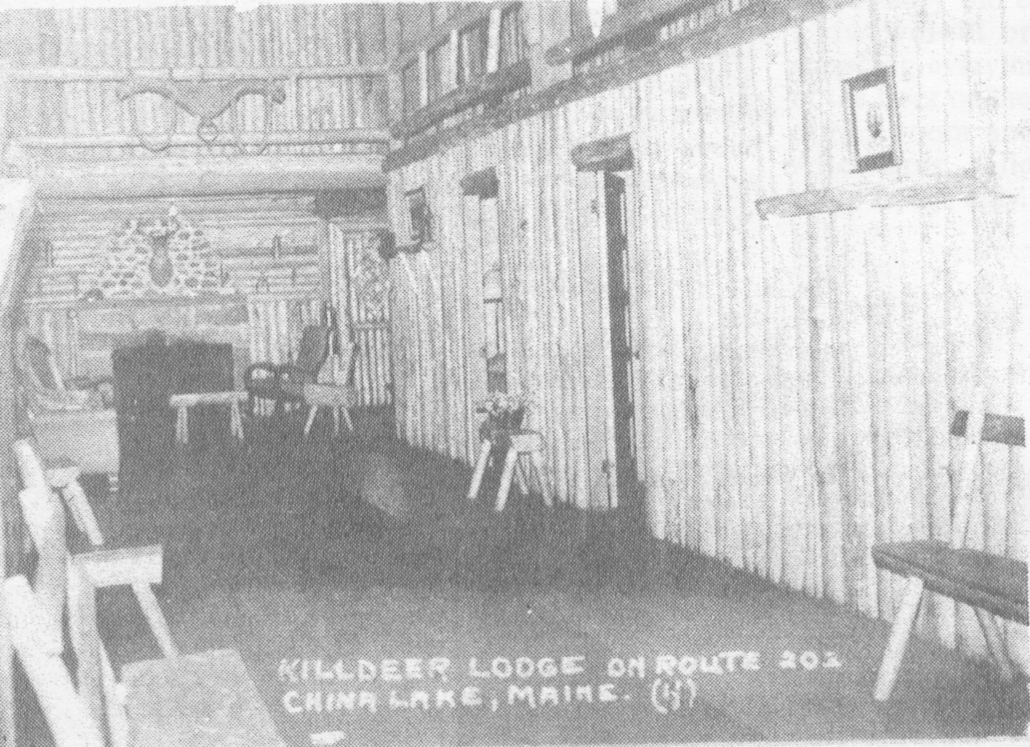 This is a reprint from The Town Line, September 18, 1999, issue, from a recollection written by Ben S. Dillenbeck in 1975 for the China Bicentennial History Book.

The advertising program begun by Eli Wagner in the summer of 1929, drawing people to China Lake’s Killdeer Point with the goal of selling lots in his development, continued during the warm months for several seasons. In spite of the stock market crash and the beginning of that Big Depression of the ‘30s, Eli continued to operate as the president of the Killdeer Maine Co. However, the tight money conditions of those days finally forced its pinching effect and Eli took to other fields where he used his talents in other developments. He had envisioned a summer colony of at least 100 cottages, a summer store, theater and religious chapel. But when the depressions’ effects really hit, many, who had planned to build, were forced to abandon their plans. There now are 28 cottages at the Killdeer Point Highland Development, which today would be legally designated as a subdivision. Two of these cottages have been converted into year-round residences, both of which can be reached only over private roads. The main road leading down into Killdeer, which Eli named “Harlem Road,” was built by Killdeer Maine Co. starting in 1928, on what was originally mapped as a “Town Rangeway.”

During the depression years, from about 1934 until the economy recovered, Killdeer Lodge tried to operate by taking both transient and American plan guests, without success: so for a few years the place was closed. During a couple of those lean summer seasons, two enterprising young Colby students hired the dining hall building and ran dances. They called the place “Dreamworld” and some area residents may recall spending pleasant evenings there.

From 1946 to about 1952, Killdeer Lodge and dining hall were operated by myself, my wife and family. Business fluctuated each year from “fair to poor.” It was hard work and a nonprofit undertaking! Supplemental income results from rentals to outside organizations for special events. Many Colby College fraternity spring dances were held there and as late as 1962 Colby College seniors held their Commencement Week Outing and Field Day there, which culminated in a huge lobster bake on the lawn, put on by the late Bill Macomber of the Colby staff.

These were happy, good time affairs, with as many as 250 seniors and guests participating. The Kennebec Bar Association also held some of its annual meetings and banquets at Killdeer, the first being arranged by Ed Muskie, who had a cottage not too far away. The Hathaway Shirt Co sales department for many years, was another client that seemed to enjoy Killdeer for its annual outing and banquet. The nice part of this affair was the excellent catering of the late Clarence Milton. What a fine man and what a wonderful feed he could put on!

St. Joseph’s Church, in Waterville, also made use of the Killdeer facilities for its three-day annual fiesta or “Maharajan” as it was also called. Another outstanding event for a number of years, until  Colby acquired its own Belgrade property, was the annual Coaches Clinic Outing and Banquet, under the leadership of Lee Williams and Bill Millett. Some very noted coaches participated in these affairs, among them Frank Leahy, of Notre Dame, Adolph Rupp, of Kentucky and Henry Iba, of Cincinnati, who was later to be coach of the U.S. Olympic basketball team. For at least 10 years, the District Deputies Association of the Grand Lodge of F&A Masons for the state of Maine held their annual meeting and picnic at Killdeer Dining Hall, on the first Sunday after Labor Day. The last Killdeer Dining Hall rental was made to father Guillet of St. Bridget’s Church, of North Vassalboro, for Sunday Mass services.

On March 20, 1963, during a winter of very heavy snowfall, young Gary Hamilton came riding down the road on a sunny afternoon and excitedly asked me what had happened to the Killdeer dining hall. “Come and take a look!” he urged. We hurried up the highway and were shocked by the sight. The whole dining hall part of the building had collapsed! As the snow was three – four feet deep, an inspection was made on snowshoes. Apparently, the east wall would not sustain the great snow weight on the big roof – so down it came, smashing everything beneath, including about one-third of the floor on the east side. The building containing the fining room and recreation hall was never rebuilt. Afterwards, Killdeer Lodge continued to operate as a Sleep Lodge only.

Next week: the conclusion.