The Killdeer Lodge at it appeared in 2017, minus the roof over the porch which collapsed several years ago. Left, the lodge as it lays following its razing in October 2018. (Photo by Bob Bennett)

The conclusion is a reprint from The Town Line, October 2, 1999, issue, by the late Faith Ames.

The property had been acquired by the Dillenbeck family in the 1920s when Ben Dillenbeck’s brother-in-law Earle Eli Wagner purchased 250 acres of land for his resort development dream on China Lake is described in a 1949 brochure promoting Killdeer Lodge on China Lake.

On the “European Plan,” no weekly rates were charged. Lodging was $2 per day, per person. Housekeeping cottages and cabins were in limited number within a three to ten-minute walk from the Killdeer Lodge and Dining Room. Some caps were located on the water’s edge, some on the hill overlooking the lake. All were completely furnished with modern conveniences.

After Killdeer Lodge’s large 100-foot dining room had been damaged when 60 feet of its roof had collapsed from snow load in the winter of 1963, the remaining 40 feet had been dismantled and salvaged by Hank Dillenbeck, the son of Emilie and Ben Dillenbeck (the author of Killdeer Point’s history published in the September 18 and September 25 issues [of the Town Line, 1999].

From 1963 until 1970, the old Bragg Barn that had been converted into sleeping quarters continued to operate as a Sleep Lodge. The dining and recreation building was never rebuilt. Then, about 1971, the lodge was closed for good.

[In 1999] the lodge was the site of Maine-ly Trains, where James Ferrone had converted it to a train shop. The train store has been attractively set up and has not only trains, but train novelties, which have delighted many a customer. A look inside still bring back memories of the beautiful lodge of yesteryear.

Killdeer certainly as a long history in our area – with many cottages still dotting the shore called Killdeer Point. Through the years, as I would ride by the lodge and see guests milling about, I remember thinking, “What a lovely place.”

Restoration of the Bragg Farmhouse at Killdeer Point

In March 1980, Hank Dillenbeck restored the old Bragg farmhouse (built circa 1820) on Killdeer Point. The house had belonged to one of the three farms originally purchased for the Killdeer development in the 1920s. As far as Hank knows, it originally belonged to Deacon Nathaniel Bragg, a veteran of the War of 1812, whose grave (across from the Lodge) indicates he died in 1838.

Throughout its heyday when the lodge was in operation the house was used somewhat as sleeping quarters for the hired help, but mostly, if was used just for storage, Hank believes.

Hand had the house freed from its original granite foundation in 1980 by leveling it on huge metal beams which were drawn by hydraulic winches to a new foundation about 70 years further from the road (which had widened over the years) to achieve a better angle for the winter sun and, especially, to get the best view on the lake. After extensive authentic restoration, the house was occupied by Hank and his family in the fall of 1980. The framework interior, three cooking fireplaces plus a brick oven are all original and workable. Timbers are all hewn and pegged, and the granite foundation is original – taken from the original home site.

Its windows are copies of originals which were built circa 1810. The windows are nine over six, which means nine panes of glass are on the top and six panes are on the bottom – with just the bottom part opening. One wing, a greenhouse, and shed, all connected, were built at the same time. A garage, added in 1982, is also connected.

Landscaping, with the addition of lovely flowers, make for an attractive setting for this lovely old home. Peach, plum, pear, grape and apple trees have been added, along with a vegetable garden which provides many varieties of vegetables for their table. Both Hank Dillenbeck and his wife, Noriko, make pickles from an abundant crop.

On a clear day, from the Dillenbeck’s sitting room, one can see Sugarloaf Mountain, Mt. Blue, Saddleback and Bigelow mountains – just as Earle Eli Wagner had seen the inspiring view back in the 1920s.

Editor’s note: The lodge, located on Lakeview Drive (Rte. 202), in South China, was demolished in November 2018. According to town of China records, the property is currently owned by Maine-ly Lakefront Properties, LLC. 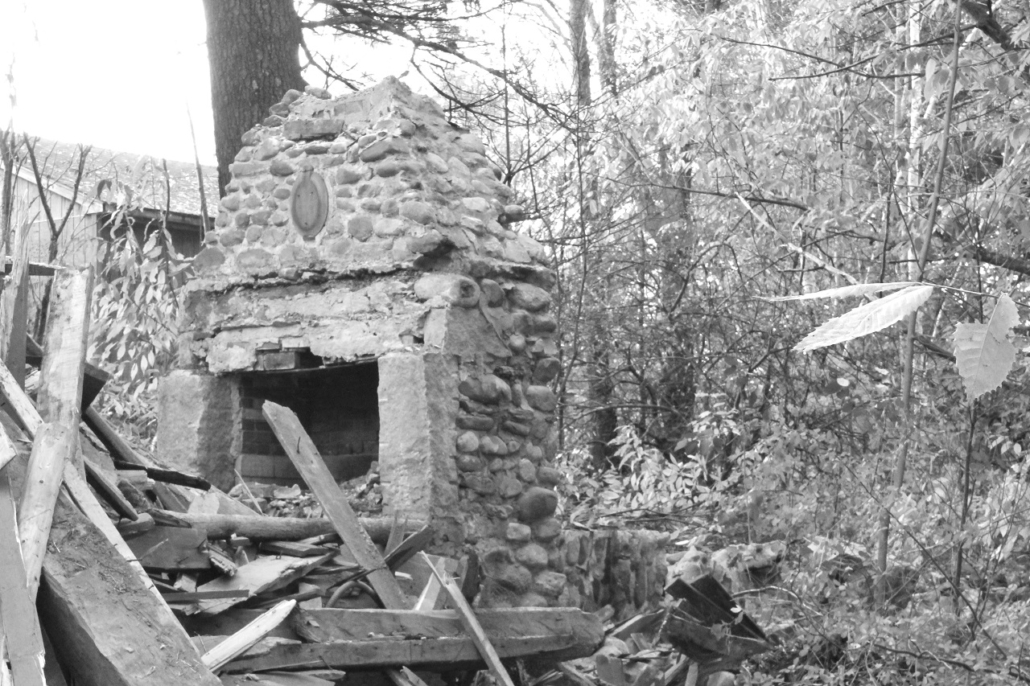 The Killdeer Lodge fireplace as it stands following demolition of the building in October 2018. (Photo by Bob Bennett)