While traveling into Waterville over the past weekend, I saw no less than five porcupines, either laying dead by the side of the road or splattered over the travel lane. Like everyone else, I have seen dead animals on the highways, but nothing like the carnage I witnessed this past weekend.

Porcupines, because they are primarily nocturnal, are vulnerable to collisions with automobiles. Their dark coloring make them more difficult to see after dark.

Porcupines, Erethizon dorsatum, are the third largest rodent, behind the capybara and beaver. They can grow to be 25-36 inches long, and weigh between 12 – 35 pounds. They are rounded, large and slow-afoot. 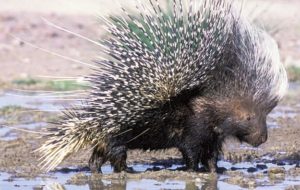 Their range includes most of Canada and western United States south to Mexico. In the east, they can be found in Wisconsin, Michigan, Pennsylvania, New York and New England.

Porcupines are not social creatures. They prefer to spend their time by themselves. However, two of the porcupines I saw were probably mother and child – one was much larger than the other. Porcupines mate in late summer and early fall. Unlike most polygymous mammals, the young are cared for by the female.

Of course, the most recognizable feature of porcupines are their quills. A porcupine may have as many as 30,000 quills. They are hairs with barbed tips on the ends. Quills are solid at the top and base and hollow for most of the shaft. They have quills all over their bodies except on their stomachs. The longest quills are on the rump and the shortest on the cheeks. Porcupines use the quills only for defense. When a predator approaches, the porcupine will turn its back, raise the quills and lash out at the threat with its tail. If the porcupine hits the animal with its quills, they will become embedded in the animal. Its body heat will cause the barbs to expand, and become more deeply embedded. If the animal is hit in a vital place it may die. Porcupines are not aggressive animals, and will only attack if it feels threatened. If all warnings fail, a porcupine will erect its quills, and release a nasty scent.

Porcupine quills have recently inspired a new type of hypodermic needle. Due to backward-facing barbs on the qills when used as needles they are particularly good at two things – penetrating the skin and remaining in place. 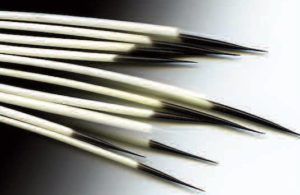 Porcupines are herbivores and eat leaves, twigs, and green plants like skunk cabbage and clover. They also eat apples. Years ago, while driving through North Vassalboro on Rte. 32, I observed a porcupine staggering down the road on the center line. It looked like it was drunk. And it was. I had been an unusually hot and dry summer (sound familiar?), and apples were prematurely falling from trees, fermenting on the ground in the heat. According to Maine Game Wardens, it was a problem they were having that year, even with deer. As everyone knows, fermenting fruit produces alcohol.

Other foods consumed are raspberry stems, grasses, flowering herbs. They also have a tremendous craving for salt. They will chew on wooden handles of human tools, other human-made wood structures and areas of collected roadside salt runoff. That is what makes them susceptible to collisions with cars. They prefer to eat after dark because of the changes in plant chemistry at night.

As mentioned before, porcupines are solitary animals, although they may den with other porcupines in the winter. They do not hibernate but may stay in their dens during bad weather. Porcupines are excellent swimmers because their hollow quills make them extremely buoyant. They are also excellent tree climbers. They are also very vocal, especially during the mating season when their calls may vary to include moans, grunts, coughs, wails, whines, shrieks and tooth clicking.

Porcupines are relatively long-lived. The longest living porcupine has been recorded at 27 years.

But, even with their potentially lethal defense mechanism, they can fall prey to fishers and mountain lions. Fishers will attack repeatedly from the front, avoiding the dangerous tail quills, until they are able to flip the porcupine on its back, attacking the unprotected belly. Mountain lions on the other hand make no attempt to avoid the quills of the porcupines, instead they attack at will and deal with the consequences.

Other interesting facts relating to porcupines is that in 2006, Kevin Breen created a political mascot, a porcupine similar to the animals that represent the two major political parties in the U.S.; the Democrats’ donkey and the Republican elephant. The porcupine image is often used to represent the Libertarian party.

Porcupines were once revered by Native American cultures throughout the continent as a food source, for the quills as decoration, and legendary status. Today, they are mostly considered as a pest. Bounties, large poisoning efforts and unregulated killings have only recently been discontinued.