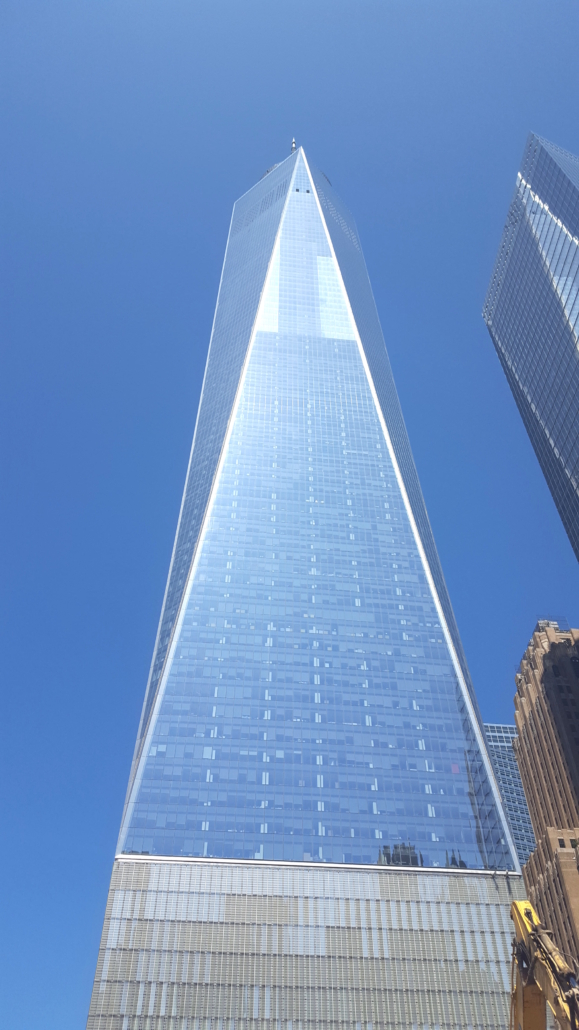 A couple of weeks ago we remembered the tragic events of September 11, 2001. That prompted me to want to share a journey I recently experienced.

Back on August 8, my wife and I, along with our daughter and her friend, traveled down to New York City to pick up our 17-year-old granddaughter who had been in the city for two weeks, studying dance at the world prestigious American Musical and Dramatic Academy (AMDA). She was one of only 110 students chosen from an application pool of 3,500 – who had come from all parts of the country and the world.

We arrived in the Big Apple on Thursday evening, and attended a final performance of the dance group the following morning, at the academy. While in New York, we also couldn’t pass up the opportunity to do some sightseeing. We visited Carnegie Hall, then worked our way down Broadway toward Times Square. Central Park was also on our agenda. We even took in a New York Mets game on Friday night.

One of the things we learned while there was that nothing is inexpensive in New York City. At our Friday lunch, when we finally decided to go to TGI Fridays, I decided to keep it simple and ordered a cheeseburger. That cheeseburger cost $18.75. A little more expensive than at our local McDonald’s.

But, the place we went to that made the biggest impression on me, and my family, was when, on our way out of New York on Saturday morning, we visited the memorial at Ground Zero, the location of the twin towers of the World Trade Center, that were destroyed on September 11, 2001. At first we were going to bypass that opportunity, knowing that we had a long journey ahead of us back to Maine. But, we finally decided it was a chance to see something that we may never have the opportunity to see, again. It was a little out of our way, but well worth it, we thought.

Once we found a parking space, we walked two blocks to the site. As we approached, you could begin to feel a sense, some kind of aura, about the place.

My only disappointment as we walked past the so-called Freedom Tower, was the commercialization of the area around the memorial. Kind of like a tourist trap atmosphere.

Then we proceeded to the pools, which sit on the site of the two collapsed buildings. There was solemness in the air. Despite the hundreds of people at the site, it was relatively quiet. Everyone spoke softly, as though to project reverence to the over 2,700 people who died there that day.

We approached the pool, where around the edge, are inscribed the names of the people who perished that day. To those who have never been there, the water falls into a large, square, black pool, then drains again into a smaller square hole in the middle of the pool, into what appears to be the abyss.

As we left there that day, we all commented on how we now have a stronger understanding, and feeling, of what happened that fateful day. It was especially moving for our granddaughter, who was born 10 months after the attack on New York City. She had learned about it in school, but this was a first-hand experience. 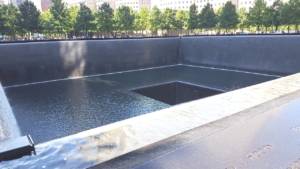 One of the memorial pools at the World Trade Center. (photo by Roland D. Hallee)

While standing near the pool, I looked around and spotted some of the buildings that we continually saw on TV, on the aerial film footage of Ground Zero, that would be embedded in our brains for a long time following the events. I also looked up and tried to imagine the towers and what the citizens of New York must have experienced watching those commercial jetliners crash into the buildings.

I once lived on Long Island, and used to make numerous trips into New York City, and to that particular part of the city, but that was in the 1960s, before the towers were completed. They had just begun to construct the North Tower in August 1966. Things have changed.

If you are ever in New York City, I highly recommend a visit to this shrine. We didn’t spend as much time there as we would have liked, but it was well worth the time and effort.