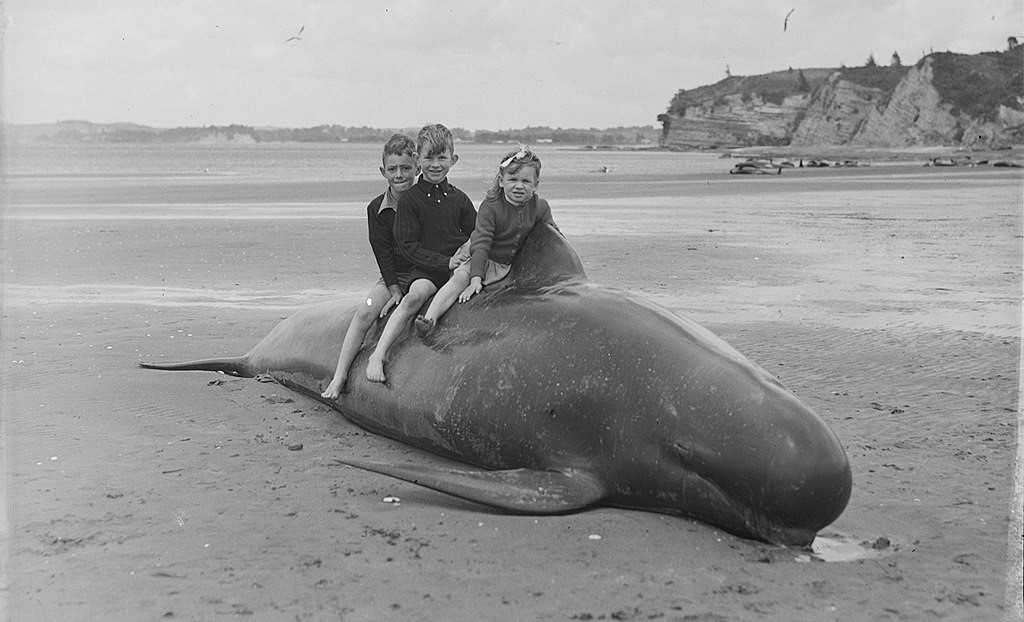 The 1987 anthology Maine Speaks contains the short story “Whale!” by Eleanor Sterling, originally published in 1974 as part of a Yankee Magazine collection. It depicts, as the author beautifully puts it in her opening paragraph, the following situation:

“On an afternoon in mid-August, a very large gray whale appeared up out of Casco Bay and swam between the rock ledges off Harpswell Island, scattering the perched seagulls to the winds, and washed ashore finally in little Dingley Cove; there it lay on its side like a stone half in and half out of the water, blowing lazily and dreamily through the opening in its head.”

This paragraph is not just good writing; it’s very good writing. It quietly, almost unobtrusively, sets the scene for a momentous event in this bucolic location on the Maine inlet waterway.

The second paragraph then lists the floating trash that had wound up on the cove in the past…”strips of old linoleum, spars, wooden crates and kegs, broken lobster pots, buoy markers, plastic beach bottles, dead fish of all kinds, and once even a dead seal pup all fat and spotted, but never before a whale.” The Coast Guard’s already on its way along with most of the Harpswell citizens.

The story then shifts gears to the point of view of a little boy Willan, whose family has lived on the island for generations and whose own personality is one of “laconic” reserve as were his ancestors and so many New England Yankees such as former President Calvin Coolidge. But, as was Calvin, he is observant and curious about everything and is already soaking in a lot of information through reading, overhearing conversations and asking his Mam lots of questions, most of which she answers endearingly and affectionately.

We find out that Mam is Willan’s guardian since his mother died the previous year, that she owns the Island’s only diner and that Willan helps her with picking blueberries for baking pies to sell and with other chores.

Meanwhile as the gray whale is in its death throes, a baby calf emerges from the side crying for its mother. Willan is suddenly thrown back to the painful memories of when his own mother died and is fearful something terrible will happen to the calf if it sticks around trying to arouse its mother. Willan was with his mother when she died and empathizes with the calf’s desire to stay with its mother but knows it too must leave for its own survival, as Willan had to go live with Mam.

The brief biography of Sterling in Maine Speaks mentions she was born in 1937 in New York City, moved to Maine in 1961 as a wife of a Bowdoin College professor, wrote about Maine people and happenings for the former Brunswick Record and, as of 1987, had moved just north of San Francisco, California, where she and her husband bought a farm, growing grapes for wine and raising German shepherds for physically challenged people.

I have not been able to glean any information on her whereabouts since then.

In July 2020, a woman was mauled and killed by a Great White Shark while swimming 20 yards from shore on Bailey’s Island in Harpswell. It was the first such fatality in the island’s history.