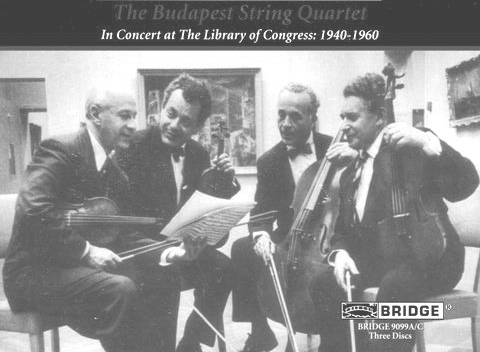 The Budapest String Quartet began in 1917 when Budapest, Hungary, was a major center for classical music education with composers Bela Bartok and Zoltan Kodaly and violinist Jeno Hubay and others. Four unemployed instrumentalists founded it and gave its debut concert in December of that year.

Previous personnel issues, finances and other such obstacles of living confounded the group. The life stories of every member in the lengthy Wikipedia article make fascinating reading.

After years of just barely escaping destruction at the hands of evil governments in war-torn Europe, the quartet members were finally able to settle in the United States and achieve much success with their concerts, recordings and teaching that would last for the remaining years until they disbanded as a group in 1967. They had already recorded discs for RCA Victor since 1932 but left that company in 1940 to record for Columbia Masterworks with greater success in worldwide fame, record sales and spreading chamber music gospel.”

The Beethoven String Quartet listed above, like the composer’s other works, has a concentration of power, beauty, harmonic development, and rhythm and, above all, a range of human emotion that is unique . The string players were in peak form in this 1941 78 set and I have listened to it often in recent days,

A large number of other performances are available to hear on YouTube and elsewhere and free for auditioning.

The sixth season of Black List just became available on Netflix. I have already watched three episodes in a row.