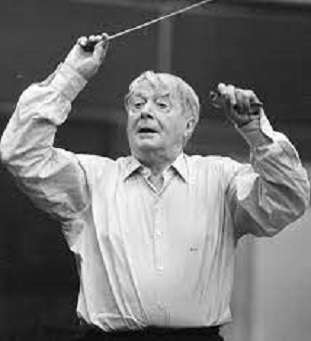 Mr. Durgin is describing the chaotic details of musicians practicing, of cables and trunks of recording equipment strewn everywhere and of most of the 2,613 seats in Symphony Hall removed prior to this October morning as RCA’s recording team of Richard Mohr, Lewis Layton and audio administrator Al Pulley keep scurrying back and forth between the main floor and upstairs recording booth:

“Ten o’clock precisely. The seeming chaos of tuning stopped abruptly. Charles Munch, score and baton in hand, dressed not in his usual rehearsal jacket but in a beautifully tailored light gray suit, mounted the stand. Over the loudspeaker came the voice of Mr. Mohr. ‘Quiet, please….Stand by. ‘Then the code numbers of the first ‘take. ‘Dead, dead silence. A tiny red light, on a pedestal down at Dr. Munch’s right, winked on.

“From the horns and trumpets burst the first half of the opening theme of Schumann’s B-Flat Symphony. A large, commanding gesture from Munch brought in the whole orchestra in a tutti of richness, power and majesty. The second half of the theme, and so on through the introduction, exposition, free fantasy, recapitulation and coda which constitute the formal structure of the movement. ”

In the last paragraph, Mr. Durgin quotes from a couple of letters Schumann himself wrote on this Symphony:

“I wrote this Symphony towards the end of the winter of 1841, and, if I may say so, in the vernal passion that sways men until they are very old, and surprises them again with each year…”

To a conductor who was preparing the Spring Symphony for performance – “Could you infuse into your orchestra…a sort of longing for the Spring, which I had chiefly in mind when I wrote it?”

I own four copies of this recording – the mono and stereo LPs, a cassette and the CD set of Munch conducting 19th century German repertoire. With respect to the CD transfer which I initially thought superior to the LPs and cassette, I have now changed my mind and am quite thrilled by the stereo LP sound.

Schumann’s Manfred Overture was composed in 1848 and has a grim mood of tragedy pervading it but it is a very exciting piece into which Munch and the Boston Symphony musicians threw themselves with brilliant abandon.

Charles Munch wrote a book on conducting in which he stated that every individual standing in front of 100 or more players should feel “still struck to the heart by fear and panic…a formidable transport of anguish ” before a concert or recording session. Only then is a conductor truly making progress and advancing in understanding.

In rehearsals, Munch was meticulous about going over every note but when the recording session or concert occurred, he could really let loose and no two concerts were exactly alike.

A favorite piece of Munch was the Berlioz Symphonie Fantastique and, when on tour with the Boston Symphony, he conducted it ten times; according to one player, each performance was different and special, as though the piece was being heard for the first time.

Charles Munch replaced Serge Koussevitzky (1874-1951) as music director of the Boston Symphony in 1949 and was replaced by Erich Leinsdorf (1912-1993) in 1962. But he continued to guest conduct and record in the United States and Europe.

In 1967, France created the Orchestre de Paris and appointed Munch as music director. A year later, he was touring with that orchestra in this country, led a November 6 concert in Richmond, Virginia, and later that evening died of a heart attack at his hotel room. He was 77.