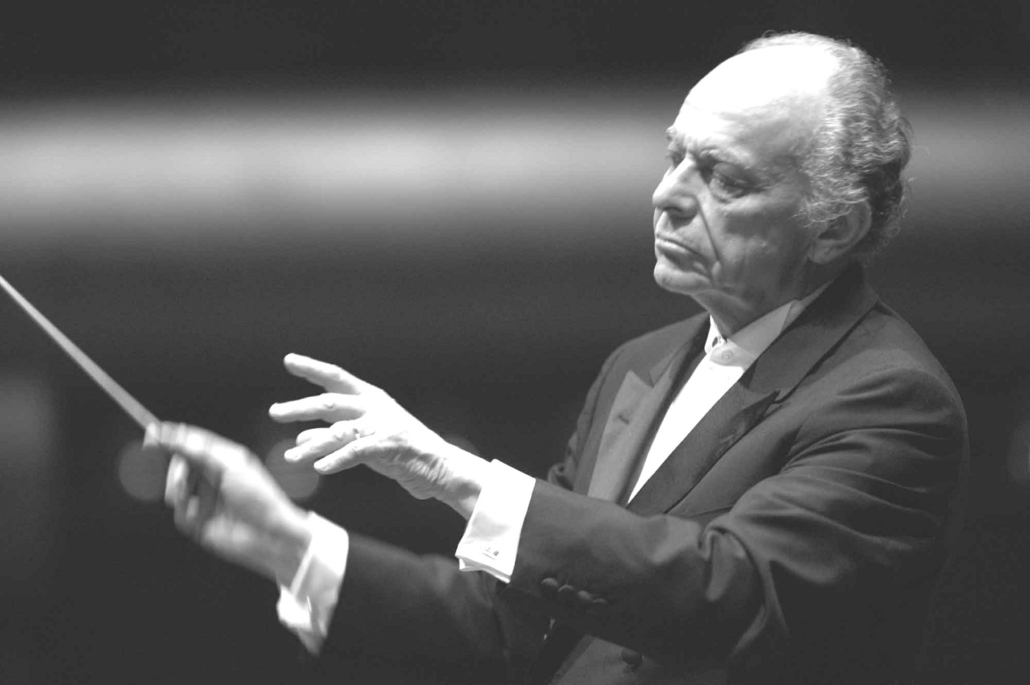 Conductor/violinist Lorin Maazel (1930-2015) was a child prodigy and at 9 years of age guest-conducted the New York Philharmonic at the 1939 World’s Fair at the invitation of Leopold Stokowski.

Maazel had a reputation for being a little supercilious prig; when he inquired at a rehearsal, “What are we playing today, gentlemen?”, someone yelled out, “How about cowboys and Indians?”

When he was in third grade, he was enrolled in advanced French and calculus. As a teenager, he was a member of the Pittsburgh Symphony during its years under the holy terror leadership of Fritz Reiner and was one of the founding members of that city’s renowned Fine Arts Quartet (its cellist George Sopkin retired to the Maine woods in the late 70s).

Maazel headed to Europe for further study and made an impression in guest-conducting engagements. In 1960, he was the first American to conduct at the summer Wagner Festival in Bayreuth, Germany.

By 1965, he was music director of the West Berlin Deutsche Opera and Radio Symphony Orchestra, with which he recorded Verdi’s Traviata, Beethoven’s Fidelio, and Puccini’s Tosca at the opera and Bach’s B minor Mass and Mozart’s Symphonies 38 and 39, to name a few that stand out.

Also exemplary were sets of the Tchaikovsky 6 Symphonies and Sibelius’s 7 with the Vienna Philharmonic.

Maazel’s conducting style was a strange mixture of very exciting and willfully hum drum, as though he was either ignited by a particular piece or didn’t give a hoot. Interestingly, I noticed in having attended two of his concerts that, when he was willfully hum drum in the performance, he seemed to be enjoying himself and quite transfixed.

His technique was crystal clear, he had a photogenic memory and he learned new works at the speed of light.

His appearances in the United States were slow to come but he did guest-conduct several times with the New York Philharmonic during the early to mid ‘60s when Leonard Bernstein was out of town.

Then in 1972, he succeeded the late George Szell as music director of the Cleveland Orchestra and won Grammies for the orchestra’s recordings of the complete Prokofiev Romeo and Juliet ballet and George Gershwin’s opera Porgy and Bess.

His appointment there did spark controversy. He was one of four candidates with the others being Istvan Kertesz, Rafael Fruhbeck de Burgos and Claudio Abbado and was the last choice in a poll taken among the players in the orchestra, but the trustees and other moneymen pulled a fast one and chose Maazel.

I cherish his Cleveland sets of the Beethoven 9 and Brahms 4 Symphonies for, again, their feisty and perverse eccentricities and the very colorful Moussorgsky Pictures at an Exhibition.

From 1982 to 1985, Maazel spent very turbulent years as music director of the Vienna State Opera, succeeded André Previn in Pittsburgh in 1988, took a position in 1996 with the Bavarian Radio Orchestra, in Munich, and then led the New York Philharmonic from 2002 to 2008.

Maazel owned a 600-acre farm in Castleton, Virginia, where he and his third wife set up a summer music school and festival during the 2000s.

By early 2014, the conductor’s health was failing and he died in July of that year.

His widow is still running the Castleton Summer Music Festival.

Much of Lorin Maazel’s music making can be accessed on YouTube.