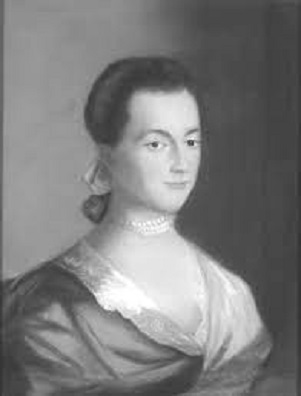 Former First Lady Abigail Smith Adams (1744-1818) fearlessly felt little concern about the opinions of others and was a true Massa­chusetts Puritan at heart.

Her father William Smith (1707-1783) was a Congregationalist minister in the Boston suburb of Weymouth and a man of importance there as was his father before him, while Abigail’s mother Elizabeth (1721-1775) was a Quincy.

A shy girl by nature, she was also precocious and absorbed every detail of life around her. Her father, uncle and both grandfathers allowed her to listen in whenever they had gentlemen of standing visiting. She was the little crown princess royal; her maternal grandfather John Quincy taught her about all the boats in Boston Harbor while Grandmother Quincy thoroughly educated her in the ways of the world.

Abigail read voraciously in the libraries of her father and an aunt and particularly enjoyed the plays of Shakespeare and Moliere and the Greek and Roman historians. But the family was worried that she was more interested in reading than in being a good Congregationalist Christian. 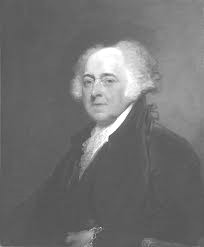 John Adams (1735-1826) was a 27-year-old country lawyer from nearby Braintree when he first saw her in the parsonage at Weymouth and within two years they would be married before she was 20, although the family considered most lawyers then lowlifes. (Calvin Coolidge faced similar resistance 140 years later as a Northhampton lawyer courting Grace Sprague from her upper class mother but Grace also knew what she wanted in a husband.).

Abigail proved to be a wonderful help mate to her husband in the managing of their farm, finances and the rearing of children while John and his more radical fire brand cousin Samuel Adams took a pro-active role during the events leading up to and including the American Revolution and afterwards.

Hubby would serve eight years as George Washington’s vice president after various diplomatic posts abroad, and then one term as president with the duplicitous Thomas Jefferson as his own vice president. Among the many letters exchanged between Abigail and her husband were several that bordered on the endearingly very intimate, which shall remain unquoted here.

Like Martha Washington, Abigail Adams missed her husband’s inauguration and received the following account of that day in relation to George Washington in one of his letters:

“A solemn scene it was indeed, and it was made effective to me by the presence of the General, whose countenance was as serene and unclouded as the day. He seemed to me to enjoy a triumph over me. Methought I heard him say, ‘I’m fairly out and you fairly in! See which of us will be happiest.’ ”

Abigail suffered from frail health much of her life and died at the age of 74 in 1818. Her husband died at 91 on July 4, 1826, the same day as Thomas Jefferson and exactly 50 years after the Declaration of Independence.