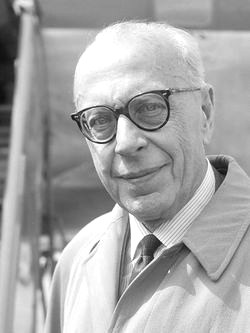 YouTube has made available an hour long September 1968, interview with the great former conductor of the Cleveland Orchestra, George Szell (1897-1970), who raised that Midwestern group of 100 or more players from an already good level to world class during the 24 years of his leadership from 1946 to his death, due to a combination of heart attack and bone cancer, on July 30, 1970. Back when Time magazine still covered classical music in depth, it devoted a page to Szell’s passing and another to that of Sir John Barbirolli who died the day before Szell. (Interestingly, during the 1930s, Szell had a girlfriend who abandoned him to marry Barbirolli.)

During the course of the interview, originally broadcasted on the BBC with Decca/London record producer, John Culshaw, Szell talks about his childhood as a prodigy on the piano and his concert tours between his home in Vienna, Austria, and London, England. When he was 11 years old. His most vivid memory was shopping in London’s department stores which had far greater numbers of items for sale than those in Vienna. Although he could easily have made a successful career as a pianist, he decided he was too lazy to put in the required hours of daily practicing and would become drawn to conducting. During his youth, he also composed a sizable number of works but decided his own music would never equal that of Bach, Beethoven and Brahms.

When he was 13, he studied for a while with German composer Max Reger (1873-1916) whose own music is tough listening at first but well worth additional hearings. Reger was also very obese and could eat more food than 5 people at a dinner party — a factor that, combined with his alcoholism, may have led to his early death from a heart attack.

Szell remembered Reger playing piano music with astounding delicacy and beauty. He also remembered him flinging around four letter words and asking young Szell to go in the hallway while he told dirty jokes to the older students.

At 19, Szell started working with composer/conductor Richard Strauss (1864-1949) at the Dresden Opera House. He told of two tendencies whenever Strauss conducted, whether it was the latter’s own music such as Salome or Don Juan, or Beethoven’s 5th Symphony. He would give a performance that was out of this world or be totally bored, looking at his watch with one hand and conducting with the other.

When Szell was negotiating with the Cleveland Orchestra board for his working terms as music director, he demanded autonomy with the hiring and firing of players and longer working seasons. Interviewer Culshaw, who had already been a friend of several years standing, jokingly commented of working with the conductor for the first time in a recording session in 1948 and of Szell’s reputation as a holy terror. Szell laughed in commenting that it was partially exaggerated. However, he did concede that players in Cleveland who were thinking they were set for life experienced a rude awakening when he demanded high standards because a conductor can’t have the nicest personality and build a world class orchestra at the same time.

Many Szell recordings and broadcasts can be heard via internet sources such as YouTube and Spotify. For beginning collectors, I would recommend the 1964 Mahler 4th Symphony, a recording of which I have worn out at least two copies, and the late ‘60s Brahms 2 Piano Concertos with Rudolf Serkin, both available inexpensively on compact disc.

Peaches are coming! I’M JUST CURIOUS: The mess of moving
Scroll to top