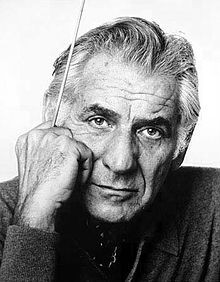 The musical genius Leonard Bernstein was born August 25, 1918, in Lawrence, Massachusetts. He would achieve fame as the composer of West Side Story, as the first native-born conductor of the New York Philharmonic, as a teacher with his televised Young People’s Concerts and as a pianist with immense sight reading ability.

My earliest memory of him is the megahit 1959 Columbia LP of him conducting Gershwin’s Rhapsody in Blue, from the piano, and An American in Paris. Bernstein became inspired by Gershwin as a teenager but had certain reservations as revealed in the following comment:

“He has left music none of which is dull, much of which is mediocre and some of which is imaginative, skillful and beautiful. There is rightly much controversy as to its lasting value.”

Bernstein’s father and mother were Jewish immigrants from the Ukraine, Samuel Bernstein becoming successful as a manufacturer of beauty supplies (He expected his son to follow him into it; when the young man refused, Sam at first refused to pay for his music lessons, but seeing his son’s talent and persistence, finally relented.).

In 1939, Bernstein was one of a tiny handful of students admitted to Fritz Reiner’s conducting class at the Curtis Institute of Music, in Philadelphia. Reiner’s conducting, particularly via the Chicago Symphony recordings he made between 1953 and 1962 when he was its music director, has thrilled me for decades with its searing clarity and beauty but the Hungarian-born Maestro had a renowned reputation for being a holy terror with orchestra players and students in his classroom.

When the Maestro auditioned a potential student, he would fling open a musical score on the piano and direct the student to play it. Bernstein passed the audition with flying colors and was the only student to get an A from Reiner.

Bernstein later commented that Reiner hammered home the importance of knowing every note in a composition more than all the players combined.

However, both conductors had radically different bodily movements in front of an orchestra. Reiner made very tiny movements with his baton, avoided perspiration and cued with his eyes. Bernstein jumped all over the podium, throwing his entire body and soul into the music and once fell off the podium during the climax of Tchaikovsky’s very exciting Francesca da Rimini.

It is reported that Reiner was once watching Bernstein grate on TV with a friend and commented, “He didn’t learn that from me.”

Composer/critic Virgil Thomson wrote, “He shagged, he shimmied and, believe it or not, he bumped.”

In 1940, Bernstein met the legendary Boston Symphony conductor Serge Koussevitzky who mentored him like a father.

Other milestones during the 1940s:

In 1943, New York Philharmonic conductor Artur Rodzinski appointed Bernstein his assistant. That same year guest conductor Bruno Walter took ill before a concert and the 25 year old Bernstein substituted and achieved a smashing success with musicians, critics and the audiences at Carnegie Hall and those listening to the radio broadcast.

In 1944, Bernstein’s Jeremiah Symphony and musical On the Town had their acclaimed premieres.

In 1945, Bernstein replaced Leopold Stokowski as Music Director of the government funded New York City Symphony which gave very inexpensive concerts and his 3 years were renowned for their adventurous programming and musical quality.

Bernstein’s many recordings with the New York Philharmonic during his tenure from 1958 to 1969 and in later years with such orchestras as the Israel and Vienna Philharmonic number in the hundreds and, whatever faults, they all have an emotional intensity and individuality.

Most can be accessed via YouTube and are on cd.

Five particularly outstanding recordings for beginners are his first LP coupling of Stravinsky’s Firebird Suite and a very powerful Tchaikovsky Romeo and Juliet just after becoming music director of the New York Philharmonic; his Mahler’s Resurrection Symphony from the early ‘60s; the Beethoven Emperor Concerto with pianist Rudolf Serkin and 5th Symphony from the same years (I have never heard a better Beethoven 5th) and the 1980s live Tchaikovsky Pathetique Symphony with its very slow tempos that only contribute to greater eloquence.

On October 14, 1990, Leonard Bernstein died from a combination of heart attack, emphysema and other ailments at his apartment in Manhattan. He was 72 and, because of his constant cigarette smoking, had been suffering from emphysema since he was 29.

Highly recommended are the biographies by David Ewen and Joan Peyser.