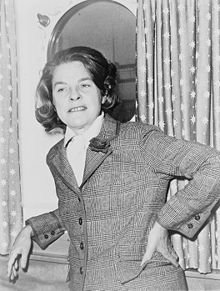 Novelist Mary McCarthy (1912-1989) summered in Castine for years and received honorary degrees from Colby College, in Waterville, and Bowdoin College, in Brunswick. She possessed a feisty, at times savagely critical brilliance as seen in her novels and essays.

I have read two of the novels, 1954’s A Charmed Life and 1963’s The Group, which became a bestseller and was turned into a Hollywood film.

A Charmed Life is a thinly disguised fictional depiction of her brief marriage to the renowned and fascinatingly brilliant essayist and critic Edmund Wilson (1896-1972) and not very flattering.

For reasons of space, I will mention one detail. He used to lock her in their bedroom for two-and-a-half hours to force her to write.

She also flirted, as did many other intellectuals, with communism during the 1930s depression but broke off with those who supported Joseph Stalin.

In the 1960s, she travelled to North Vietnam and wrote two books in which she claimed that the Viet Cong were not brutal at all in their treatment of civilians, a point of view that has been rightfully refuted and rebuked.

She appeared on the Dick Cavett Show in 1979 and caused controversy and a lawsuit brought against her by playwright Lillian Hellmann (1905-1984); McCarthy charged Hellmann’s Memoirs with being nothing but lies, “even her a’s, an’s and the’s were lies.” Her allegations about Hellmann engendered much investigation by journalists, proved McCarthy to be telling the truth and led to a decline in Hellmann’s reputation.

One of McCarthy’s three younger brothers was the actor Kevin McCarthy (1914-2010) who achieved fame as the star of the 1956 movie classic The Invasion of the Body Snatchers and who gave a consummate performance as a serial killer in a 1968 guest appearance on Jack Lord’s Hawaii Five-O.

Bohm did conduct in Germany during the Hitler years and supported several of his policies. Somehow, he did get de-nazified after World War II by the Allies and, very strangely, became bosom buddies with composer/conductor Leonard Bernstein (1918-1990).

“And the steel-bright days went by. No thaws came by to erase the grooves in the checkerboards. The icehouses were filled to their eaves and the last tier roofed in the aisles between the cakes. Roughage was heaped over all. The doors were closed and sealed.”