How I started collecting records: 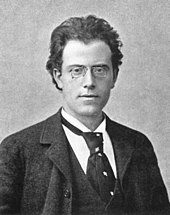 My first encounter with the music of Gustav Mahler (1860-1911) occurred during the spring of 1963, when I was 11. That year RCA Victor had developed the Dynagroove recording process, initially releasing 10 LPs with both mono and stereo editions, and touting the enhancement as the greatest advance in sound since the electrical microphone in 1924 during the 78 days. I remember salivating over the record ad in the Portland Sunday Telegram advertising the black label pop and red label classical items, wanting all of them and worrying about whether I would like the music later. In those days, I considered any LP from RCA Victor and Columbia as a status symbol, just as I did the huge Magnavox cabinet with radio, phonograph, and color TV and the Thunderbird convertible. I was definitely a crass materialist in those days – money was everything!

Meanwhile, RCA released a $1 album, entitled The Sound of Tomorrow, which was heavily advertised on Sunday night’s Wonderful World of Disney, RCA being its sponsor, but also in Buick ads, as RCA forged a deal with the auto company for its dealerships to be the exclusive venue for purchasing the record. Naturally, one afternoon, Mom drove me to Waterville’s own Buick dealer, then owned by a family friend, Nick Saporita, and located on Silver Street, and I took my copy home to play on the $32 manually operated RCA Victor stereo player. The machine was given to me as a birthday present but I was given to understand that it was the family player. Such double-dealing was then common as part of family sharing.

Side one had the black label, thereby providing the following five pop artists:

My second Mahler record wouldn’t be added to my then very small collection for three years due to very limited cash and the distractions of other composers!