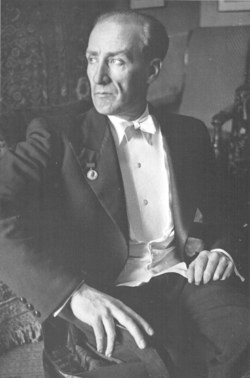 Since 1946, the Prague Spring Festival has been a renowned annual gathering of top notch classical artists in the Czech Re­public. The An­dante label re­leased a nicely packaged set of four CDs and a hardcover book consisting of broadcasts from 1947 to 1968 featuring 11 great conductors with the extraordinarily accomplished Czech Philharmonic. I offer one anecdote of a fascinating guest Maestro and, due to space, brief comments on the others:

A 1957 Tchaikovsky 4th Symphony had the longtime conductor of the Leningrad Philharmonic, Yevgeni Mravinsky (1903-1988), delivering an especially riveting performance of what has become my favorite symphony by this composer, even more than his Pathetique or 6th.

YouTubes of Mravinsky reveal a poker-faced gentleman using the tiniest hand and finger gestures while drawing the most exciting playing. Just about every other conductor in the profession admired him.

Mravinsky also had the ability to make a piece always sound fresh, no matter how many times he had conducted it before. One player told of participating in 113 performances of the Tchaikovsky 5th under Mravinsky and each one was different from the others in some special way.

Mravinsky also had the longest tenure of any conductor, serving over 50 years as music director in Leningrad, before it changed back to being the Saint Petersburg Philharmonic after the early ‘90s collapse of the Soviet Union.

Leopold Stokowski (1882-1977) collaborated with pianist Lev Oborin (1908-1974) in a dazzling 1961 Rachmaninoff 3rd Piano Concerto. The charismatic Stokowski contrasted vividly with the jovially obese and bespectacled Oborin, who partnered in concerts and recordings with violinist David Oistrakh (1907-1974).

Munch preferred minimal rehearsals so as to give the players and himself greater reserves of energy and excitement during the concert itself. His YouTube videos reveal a man who could dance and jump like his younger colleague Leonard Bernstein.

Igor Markevitch (1912-1983) with a blazing 1959 Stravinsky Rite of Spring and who was married to an heiress whose family made millions in the French perfume industry.

The irascible perfectionist George Szell (1897-1970), of Cleveland Orchestra fame, in a gripping Beethoven Coriolan Overture also from 1959. Somebody once commented that Szell was his own worst enemy to which Metropolitan Opera general manager Rudolf Bing retorted, “Not while I’m alive!”

Next, my personal favorite of the Maestros assembled here as one to collect recordings of, Belgium born Andre Cluytens (1905-1967) spent most of his adult years in Paris. He was a radical contrast to Szell, being a very kind man whose death from lung cancer because of his chain smoking saddened so many friends.

He was also incredibly brilliant at drawing exquisite performances and a 1955 Berlioz Symphonie Fantastique is one of five he left us, and all of them on my shelves.

Former Czech Philharmonic Music Director Vaclav Talich (1883-1961) recorded some fine 78 sets of Dvorak and Smetana that were released by Victor Red Seal here in the U.S. and conducts a lovely 1954 performance of Dvorak’s tone poem The Wood Dove.

He was wrongfully thrown into jail just after World War II for so-called “unpatriotic conduct” during the Nazi occupation but was released and exonerated by former Czech President Benes.

Ancerl was an emaciated Holocaust survivor when the camps were liberated. Not long after this 1968 concert, he and his wife and children emigrated to Toronto, Canada, just as the Russian tanks were rolling into Czechoslovakia.

Russian conductor Kirill Kondrashin (1914-1981) collaborated with pianist Sviatoslav Richter (1914-1998) in an elegant 1950 Mozart 20th Piano Concerto, although interestingly Richter detested most of Mozart’s music while much preferring the music of his teacher Franz Josef Haydn.

Kondrashin defected to the west during the late 1970s and was forging a wonderful relationship with the Concertgebouw Orchestra of Amsterdam but tragically died of a sudden heart attack on his 67th birthday just after conducting a concert with them.

The most well known Russian violinist David Oistrakh (1908-1974) delivered a powerful 1947 Prokofiev 1st Violin Concerto with Rafael Kubelik (1914-1996) conducting. Kubelik first conducted the Czech Philharmonic at the age of 19. Later he would be music director of the Chicago Symphony, the Royal Opera House at Covent Garden and the Bavarian Radio Orchestra of Munich.