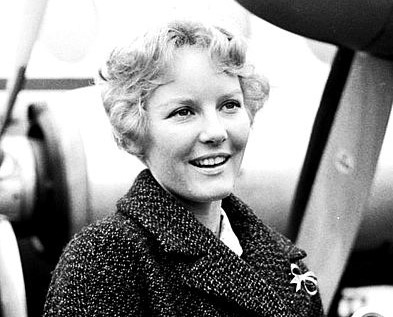 Now 88, singer Petula Clark achieved fame in England and Europe before hitting paydirt over here. Downtown, This Is My Song, and Don’t Sleep in the Subway are megahits for the best reasons-they are beautiful songs beautifully sung. She had producer Tony Hatch working the arrangements enhancing her singing numerous times. In fact, if she ever made a bad record, I don’t know of it. 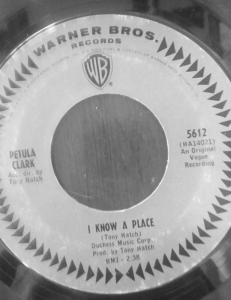 I Know a Place may be my favorite of the group with its spirited rhythms and upbeat musicality. It took a few hearings to like the B side, Jack and John, but it too exudes charm.

In 1968, she hosted a tv special and sang a duet with Harry Belafonte during which she locked arms with him. A representative of the sponsor Chrysler wanted another take used in which Clark stood at a distance from Belafonte because he feared a backlash in the Deep South. Clark refused, she destroyed all other takes of the duet, and the special made television history , receiving an Emmy nomination.

“In the clear dawn next day, along a hundred roads that led down to the Kennebec, farmers were trudging, mustaches hanging down to the woolen mufflers like the tusks on the walrus. Brown mustaches, golden ones, black ones, gray ones and white. But every one in front of a man. And behind them steamed their wealth, on its own feet. Tall, sinewy sons, out of school for good and on the doorstep of manhood and marriage, horses with hides like scrubbed horse chestnuts, big of hoof and billowy of muscle, fattened on corn, sharp shod, with long calks of steel that bit into the frozen ground. Here you could reckon up a man’s prosperity in solid tangible things, as in the days of Jacob and Laban. Goods with the breath of life in them. Like Job’s. The richest man was one who had nine or ten strong men to follow the swing of his creasing trousers in ringing ironed shoes. Or three or four spans of horses with the morning star in their forehead and the music of steel under their feet. So the wealth of the Kennebec came down to the harvest of Maine’s best winter crop in the eighties.”

A note on Vassalboro, Maine, history, the Cates Country Store (which was in family hands from when it was built in 1824 to when it was sold in 1971 to new owners) had ice deliveries from a horse drawn wagon well into the 1920’s. A gentleman, who drove such a wagon and knew my grandfather, Harold Cates (1881-1953), his father George Henry Cates (1852-1938) who ran the store for 65 years from 1873 until he died and other relatives employed in the store, used to park his car down by the Civil War monument during the early 1960’s to read his newspaper and I made his acquaintance. His name was Oscar Tubbs, he lived on the Cushman Road in Winslow in an old house with a long driveway and he told some fascinating stories about those years.