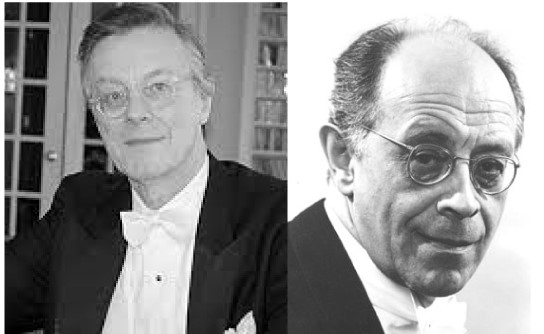 Peter Serkin (1947-2020) and his father, Rudolf Serkin (1903-1991), achieved fame as classical pianists of immense distinction. I saw each of them perform twice in concert and found their musicianship quite special for different reasons. Before writing about Peter, who died recently of pancreatic cancer, I will share experiences of his father.

My first encounter with Rudolf Serkin was via a 1960 Columbia Masterworks recording of the Brahms 2nd Piano Concerto with Eugene Ormandy and the Philadelphia Orchestra, which my mother bought as a member of the Columbia Record Club in Terre Haute, Indiana. The piece, written in 1881, more than 20 years after the composer’s 1st Concerto, is filled with grandeur, passion, beauty and knuckle-busting virtuosity – just the sort of music Rudolf Serkin reveled in.

He dove into it with full-fledged commitment and joy, ripped into its furies ferociously and coaxed its more poetic moments, especially in its tender 3rd movement Andante with the solo cello passages, as though his own life depended on it.

I saw him perform twice at Boston’s Symphony Hall in 1974. He was a small man with small fingers that he had to relentlessly train to span octaves, unlike pianists with larger hands who met those technical challenges more easily. And he was a joy to watch; he would sing with his hands and body, jump up and down on the piano stool during the more dramatic passages and hum constantly.

One concert was a pension fund one with the Boston Symphony under Seiji Ozawa and featured the Brahms 1st Concerto which, as far as I was concerned, he played better than anyone else. (It happens to be my favorite piano concerto, I have well over 80 recordings of it including the four different ones that Serkin did and each one of them has at least something good.)

The second concert was an all-Beethoven recital with the 1st and 32nd Piano Sonatas and Diabelli Variations. That Sunday afternoon, Symphony Hall was packed and I was one of several seated on the stage.

Peter was a taller man, he had bigger hands and he conveyed a more relaxed manner at the keyboard. He also favored different repertoire from his father and performed much 20th century music, unlike the 18th and 19th century composers that drew the elder Serkin’s attention. But the son did record six Mozart Concertos, Beethoven’s transcription of his Violin Concerto and a recording of the Brahms 1st Concerto, which is among those I haven’t heard yet.

I saw him play the Ravel Piano Concerto with the Washington D.C. Symphony under Christian Badea at its Kennedy Center, in 1979, and a double bill of the Mozart 16th Concerto and Igor Stravinsky Capriccio for Piano and Winds with the late Sergiu Comissiona conducting the Houston Symphony at Jones Hall, in 1987, during the years I lived in that city. He was the personification of cool, calm and collected at the keyboard and played beautifully.

A couple of asides. Rudolf Serkin once announced that he was taking a winter sabbatical to study the Haydn String Quartets. When asked by friends why, he replied, “Because they are beautiful.”

Meanwhile, Peter listened to such rock bands as the Grateful Dead and would retreat to the Cave in his house which contained his record collection of over 3,000 LPs.

FOR YOUR HEALTH: Protecting your ability to drive safely for as long as pos... I’M JUST CURIOUS: And now, equal time for cat information
Scroll to top