Adventures of Ozzie and Harriet

The Adventures of Ozzie and Harriet was one of the two or three longest running comedy shows in TV history. From 1944-54 – the last two years simultaneously on TV, it was a hugely successful radio program. In 1952, Ozzie (1906-1975) persuaded ABC to sign an unprecedented 10-year contract that paid the family, whether the show was cancelled or not, and then his perfectionist work ethic contributed to its rousing success on TV.

All four Nelsons played themselves but, otherwise, the stories had very little to do with their real lives, although, during the introduction, they stood in front of their actual house (the interior was painstakingly reproduced on the studio backlot where each episode was filmed). For me, the show’s enjoyment derived from the daily life family situations and the cleverly sketched humor naturally arising from those situations. 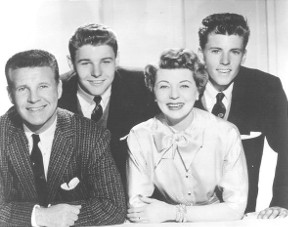 The Nelson Family, Front, Ozzie & Harriet; Back, David and Ricky

Don Defoe (1913-1993) played the intrusive but likable neighbor, Thorney, – perpetrator of mischief and misunderstandings. Later, Lyle Talbot (1902-1996) and Mary Jane Croft (1916-1993) portrayed Joe and Clara, whose involvement in back and forth antics between them and the Nelsons brought much comic relief.

Next, what fan could forget Rick’s giggling, bungling, free-loading friend, Wally Plumsted, who often provoked his long-suffering girlfriend, Ginger, who in turn so often referred to him as Fatso; both Skip Young (1930-1993) and Charlene Salerno (1938-1986) scored high points with their meticulously honed timing, delivery and vivid characterization – oddly, Salerno never appeared elsewhere on any TV show and film.

Finally, Ozzie himself could hold his own for unexpected, very funny facial expressions and movements. I lost track of the number of split seconds where he suddenly made a face at us viewers.

Harriet (1909-1994) was the sturdy assuring mother figure, David (1936-2011), the earnest good son and older brother, and Ricky (1940-1985) was endearing in his own constant desire to do what’s right, occasionally straying off the plantation with farcical moments of bad judgment. When he became a recording star, his father devoted the last five minutes of several episodes to him and his band performing a recent hit song.

Various video cassettes and DVDs have been released of episodes from the 14-year run but a complete set of all 435 episodes have been gathered and slated for DVD/Blue Ray release.

IF WALLS COULD TALK: East Madison Historical Society on the move I’m Just Curious: Had to pass this along
Scroll to top