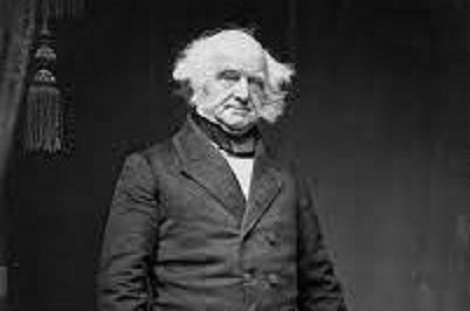 When I was in third grade, an aunt gave me a calendar with paintings and photos of all the presidents from George Washington to Dwight D. Eisenhower. I remember being fascinated by these names and faces: Washington’s implacable dignity, John Adams’ cherubic candor, Jefferson’s humane inscrutability, etc.

Martin Van Buren (1782-1862) with his bald head and wavy hair similar to that of the Three Stooges Larry Fine, had a good-natured congeniality and aura of approachability.

Reading up on his career in New York state politics and his subsequent rise to national clout, I now see how the term used to describe him, “sly fox”, was an apt one.

Van Buren was sympathetic to the farmers but also allied himself with the insidious Tammany Hall party machine which would influence so much of what went on in New York.

He supported state Governor Dewitt Clinton’s spearheading of the building of the Erie Canal but then threw his weight behind Clinton’s opponent in a re-election campaign.

He believed in the expansion of voting rights but opposed universal suffrage.

He opposed the annexation of Texas as a slave state but was otherwise silent, seeing the abolition of slavery as a threat to national unity (in 1848, he would speak out against slavery as the chosen candidate for the short-lived Free Soil party, a coalition of anti-slavery Democrats, Whigs and abolitionists.).

His skills as a mediator and good listener were highly conducive to building some bridges between political foes, as was his occasional support of policies anathema to his allies.

Van Buren’s wife Hannah died at 35 of tuberculosis in 1819. In 1838, their son Abraham married Angelica Singleton (1818-1877), a second cousin of former First Lady Dolly Madison who finagled the match. During the remaining two years of Van Buren’s presidency, she served as her father-in-law’s hostess with consummate elegance.