Polish born Piotr Janowski (1951-2008) recorded both of these Concertos when he was 16 years old but plays in a wonderfully matured, accomplished manner with musicality galore and a seasoned conductor and orchestra. The Concertos are richly rewarding listening experiences that hold up well. The Szymanowski is a very shimmering, coloristic piece that has become a big favorite of mine in recent years. Mozart’s joyous 4th, along with his 2nd, 3rd, and 5th Concertos, was finished by 1775, when he was 19 and would never write again for any solo string instrument. A record well worth the search.

hosted by Nelufar Hedayat; produced by Fusion and available on Netflix; premiered November 13, 2016; approximately 41 minutes for each of 8 episodes.

Recently I watched the first episode of what promises to be an interesting series of investigative journalism on the black market in illegal commodities, The Traffickers, with already seven additional programs available on Netflix. Its topics include human trafficking, fake pharmaceuticals, weapons, human organs, etc.

The host, Nelufar Hedayat, is a 30-year-old Muslim woman, who has traveled light years around the globe to follow up even the most minor threads to both heighten and bolster each weekly topic. The one I saw dealt with the wholesale poaching of the rhino population, mainly found in South Africa’s Kruger Preserve. It is one of huge profit and supposedly minimal risk. But researchers have found an average of three rhinos being killed daily, thus concluding that the population will end up extinct. The demand, mainly found in Southeast Asia, centers on the supposed healing of every known disease through grinding the powder of the rhino’s horn, a belief held since the Middle Ages. Secondly, the filthy rich enjoy the various trinkets carved and whittled from the horn, with which they flaunt their wealth .

Hedayat and her staff risk their lives talking to the involved criminal elements and depict the dangers to communities where the animals are processed. 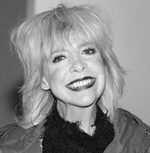 I have commented elsewhere on this cassette being one of the most beautiful albums of late ‘80s pop music I have ever heard. Julee Cruise, now 61, is a very talented singer who was provided a number of songs here by composer Angelo Badalamenti, all of them in the sweet, dream-like, ethereal category and music one can listen to or simply relax with. Cruise and Badala­menti both worked with director David Lynch who was then involved with his creation, Twin Peaks, a cult favorite among TV viewers, and were associated with some of Lynch’s other projects as well. The Wiki bio on Cruise is rather insightful and quite interesting.