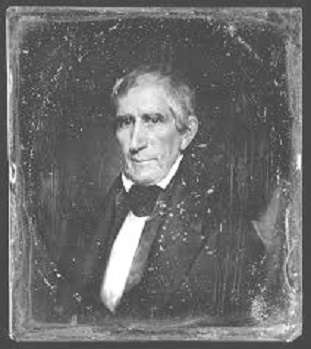 Former President #9, William Henry Harrison (1773-1841) achieved renown as an army captain in command at Fort Washington, Ohio, when he was in his 20s; as a governor in the Indiana Territory during the early 1800s; and being promoted to Major General after defeating the Indians in a battle at Tippecanoe which was a Wabash River settlement in Indiana (Hence his nickname: 1840 presidential campaign slogan with vice-presidential running mate John Tyler – “Tippecanoe and Tyler, too.”) – and his success in a number of other War of 1812 battles, including the defeat of the formidable Indian Chief Tecumseh.

After resigning from the military in 1814, Harrison served in the Ohio state senate, as Congressional representative from the Buckeye state and finally U.S. Senator. 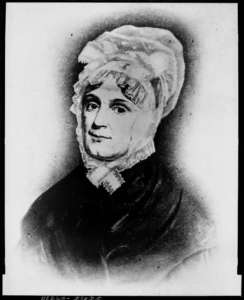 Harrison’s wife Anna Symmes Harrison (1775-1864) was born in New Jersey; her father was then serving in the American army. When her mother died, her father returned home, disguised himself as a Brtish officer and took his year-old daughter through enemy lines to live with her maternal grandparents on Long Island for the duration of the Revolutionary War.

After the war ended, her father had become a judge on the New Jersey Supreme Court, and then moved to Ohio where he accumulated 100,000 acres of land while Anna attended private schools on Long Island and in New York City.

Judge Symmes came east to remarry and took Anna, her stepmother and other settlers back to Ohio to live on his acreage. Shortly after arriving, Anna met her future husband who in­stantly fell in love with her but Papa considered Captain Harrison a poor prospect due to his low salary and refused his consent.

Anna was undeterred and, when her father was away, the couple married on November 22, 1795, exactly 168 years before tragedy struck a later president, in Dallas, Texas. By 1804, the couple was living in the Indiana Territory in a spacious log house which she and her husband built themselves, not long after he became governor.

The couple gave hospitality to many passing through, especially preachers, and spearheaded the building of schools, churches and libraries throughout the Territory.

When her husband won the White House, other family members traveled east with him but she was too ill at that point. D.C. was quite chilly while the inaugural festivities were going on, the president participating fully and throwing all caution aside. His March 4 inauguration speech clocked in at 75 minutes as he delivered it without any winter coat and hat.

The following day, already developing a cold, the president went shopping for groceries at an outdoor market and the cold worsened into pneumonia within a couple of days. He died a month later at the age of 68 and, on his deathbed, reciting one of the Psalms from memory.

Meanwhile Anna had recovered from her own illness back home in Ohio and had finished packing for the move when she received word of her husband’s death.

Congress gave her a $25,000 pension, which was the equivalent of the presidential annual salary and which would be granted to future presidential widows for several years.

She outlived her husband by 23 years, and nine of their ten children. Three of her grandsons, including the 22nd president Benjamin Harrison (1833-1901, who served from 1889 to 1893), fought on the Union side during the Civil War, a commitment she took much pride in even though she abhorred war as a general principle.