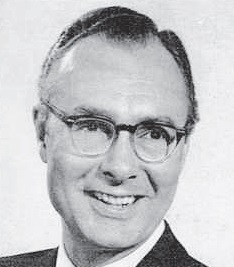 After serving seven years as Arthur Godfrey’s music director, Archie Bleyer (1909-1989) was unceremoniously fired almost the same day in 1953 as Julius LaRosa. Meanwhile, Bleyer had founded Cadence records where he would be developing a catalog that would eventually include LaRosa, the Chordettes, Andy Williams, the Everly Brothers, Link Wray and, in 1962, the megahit First Family album, featuring one North Vassalboro native, the late Vaughan Meader, whose day in the limelight ended, of course, on November 22, 1963.

The 45 rpm set under consideration this week features Bleyer, with his orchestra; the Ray Charles Singers, who backed up Perry Como on his own RCA records and TV shows for ten or more years; and singers Stephen Douglass, Dorothy Evans and Arthur Malvin, performing eight songs from the 1954 musical, Pajama Game, later even better known as a 1957 film with Doris Day and John Raitt. Two songs from the musical were hit records on their own – Hernando’s Hideaway for Bleyer and Hey There for Rosemary Clooney.

The renditions here of these superb songs were spirited in the best sense of the word. Some of them can also be heard on YouTube.

A P.S.- Bleyer got married to one of the Chordettes, Janet Extel, while both parties were still working for Godfrey, thus violating the boss’ rule about dating fellow employees – a factor most likely contributing to Bleyer’s dismissal! 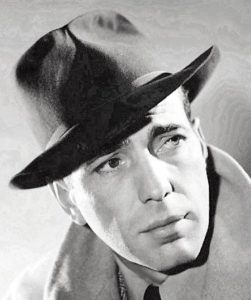 In terms of the number of times I have watched this film since my first viewing at the Cambridge, Massachusetts, Brattle Street Theater in May 1974, the Big Sleep is my favorite from the peak film noir period from the mid-’40s through the ‘50s, when the detective movies and TV shows had a combination of quantity and quality that would remain unmatched to this day.

Humphrey Bogart may have given his best performance as the cynical, ever chain-smoking, always reparteeing detective Philip Marlowe. When he visits the very rich, but ailing General Sternwood (portrayed most movingly by the veteran stage and screen actor, Charles D. Waldron, just two years before his own death at 71), and is asked by the gentleman how he likes his brandy, he replies, “In a glass!”

Within ten minutes of the visit, Marlowe meets the general’s two daughters – the eldest, Vivian, (Lauren Bacall,) who , as described by her father, is “spoiled, exacting, ruthless”; and the youngest, Carmen, (Martha Vickers,) a quite promiscuous, addicted-to-dope loose cannon who wreaks much havoc on a regular basis.

The plot initially centers around Marlowe being hired by Sternwood to get a blackmailer to leave Carmen alone, the second such situation she has gotten herself into. And this problem is the most minor of a Pandora’s Box of nastiness involving pornography, deceit, grifters, hit men and at least five murders. And one fun movie!

The acting is masterful throughout all major and minor roles. Max Steiner’s lush soundtrack enhanced the melodramatic scenes in a most riveting manner right up to a truly cathartic climax.

The great Southern novelist, William Faulkner, was one of the three scriptwriters.