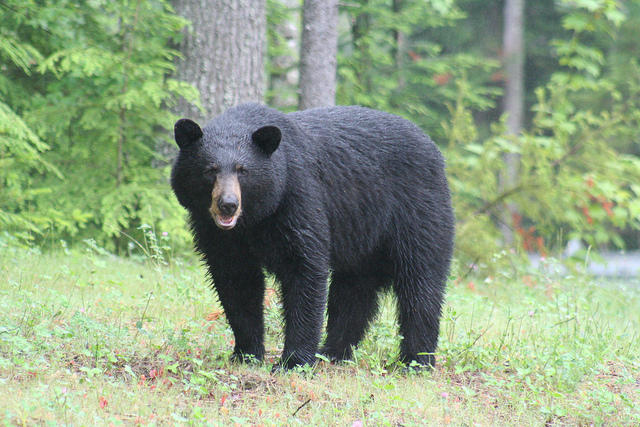 It’s official. Today, on the first day of spring, reports are out that black bears are awakening from their winter hibernation.

American black bears were once not considered true “sleepers,” but because of discoveries about the metabolic changes that allow American black bears to remain dormant for months without eating, drinking, urinating or defecating, most biologists have redefined mammalian hibernation as “specialized, seasonal reduction in metabolism concurrent with scarce food and cold weather.” American black bears are now considered highly efficient hibernators.

The bears enter their dens in October and November.

Hibernating American black bears spend their time in hollowed-out dens in tree cavities, under logs or rocks, in banks, caves, or culverts and in shallow depressions. Although naturally-made dens are occasionally used, most dens are dug out by the bear itself. Females have been shown to be pickier in their choice of dens in comparison to males.

It is listed by the International Union for Conservation of Nature (IUCN) as a least-concern species, due to its widespread distribution and a large population estimated to be twice that of all other bear species combined. Along with the brown bear, it is one of only two of the eight modern bear species not considered by the IUCN to be globally threatened with extinction.

Historically, American black bears occupied the majority of North America’s forested regions. Today, they are primarily limited to sparsely settled, forested areas. American black bears currently inhabit much of their original Canadian range. They have been extirpated from Prince Edward Island since 1937.

In the northeast part of the range (United States and Canada), prime habitat consists of a forest canopy of hardwoods such as beech, maple, birch and coniferous species. Corn crops and oak-hickory mast are also common sources of food in some sections of the Northeast; small, thick swampy areas provide excellent refuge cover largely in stands of white cedar.

American black bears have better eyesight and hearing than humans. Their keenest sense is their sense of smell, which is about seven times more sensitive than a domestic dog’s. American black bears are excellent and strong swimmers, swimming for pleasure and to feed (largely on fish). They regularly climb trees to feed, escape enemies and hibernate. American black bears living near human habitations tend to be more extensively nocturnal, while those living near brown bears tend to be more extensively diurnal. Their social behavior is somewhat similar to that of canids.

American black bears tend to be territorial and non-gregarious in nature. However, at abundant food sources (e.g. spawning salmon or garbage dumps), they may congregate and dominance hierarchies form, with the largest, most powerful males dominating the most fruitful feeding spots. They mark their territories by rubbing their bodies against trees and clawing at the bark. Annual ranges held by mature male American black bears tend to be very large, though there is some variation.

Predation on adult deer is rare, but it has been recorded. They may even hunt prey up to the size of adult female moose, which are considerably larger than themselves, by ambushing them. There is at least one record of a male American black bear killing two bull elk over the course of six days by chasing them into deep snow banks, which impeded their movements. Like brown bears, American black bears try to use surprise to ambush their prey and target the weak, injured, sickly or dying animals in the herds. Once a deer fawn is captured, it is frequently torn apart alive while feeding. American black bears often drag their prey to cover, preferring to feed in seclusion.

The average lifespan in the wild is 18 years, though it is quite possible for wild specimens to survive for more than 23 years. The record age of a wild specimen was 39 years, while that in captivity was 44 years.

With the exception of the rare confrontation with an adult brown bear or a gray wolf pack, adult American black bears are not usually subject to natural predation. Known predators of bear cubs have included bobcats, coyotes, cougars, gray wolves, brown bears and other bears of their own species. Many of these will stealthily snatch small cubs right from under the sleeping mother. Once out of hibernation, mother bears may be able to fight off most potential predators. Even cougars will be displaced by an angry mother bear if they are discovered stalking the cubs. Flooding of dens after birth may also occasionally kill newborn cubs. However, in current times, American black bear fatalities are overwhelmingly attributable to human activities. Seasonally, tens of thousands of American black bears are hunted legally across North America, with many more being illegally poached or trapped. Auto collisions also may claim many American black bear lives annually.

American black bears feature prominently in the stories of some of America’s indigenous peoples. One tale tells of how the black bear was a creation of the Great Spirit, while the grizzly bear was created by the Evil Spirit. In Kwakiutl mythology, American black and brown bears became enemies when Grizzly Bear Woman killed Black Bear Woman for being lazy. Black Bear Woman’s children, in turn, killed Grizzly Bear Woman’s children. The Navajo believed the Big Black Bear was chief among the bears of the four directions surrounding Sun’s house and would pray to it in order to be granted its protection during raids.

Compared to brown bear attacks, aggressive encounters with American black bears rarely lead to serious injury. However, the majority of American black bear attacks tend to be motivated by hunger rather than territoriality and thus victims have a higher probability of surviving by fighting back rather than submitting. Unlike female brown bears, female American black bears do not display the same level of protectiveness toward their cubs and seldom attack humans when they are in the cubs’ vicinity. However, occasionally, attacks by protective mothers do occur.

Historically, American black bears were hunted by both Native Americans and European settlers. Some Native American tribes, in admiration for the American black bear’s intelligence, would decorate the heads of bears they killed with trinkets and place them on blankets. Tobacco smoke would be wafted into the disembodied head’s nostrils by the hunter that dealt the killing blow, who would compliment the animal for its courage.

American black bear fat was once valued as a cosmetic article that promoted hair growth and gloss. However, animal rights activism over the last decade has slowed the harvest of these animals; therefore the lard from American black bears has not been used in recent years for the purpose of cosmetics.

The American black bear is the mascot of the University of Maine and Baylor University.

OK, we’ve learned quite a bit about the American Black Bear. Although it is my belief there is nothing in the Maine woods than can kill you, I would definitely not tempt a black bear. As with any other wild animal, the best rule of thumb is to avoid them as much as possible.

“Rooster” was the nickname of which fiery shortstop who played for the Red Sox from 1974 until 1980?