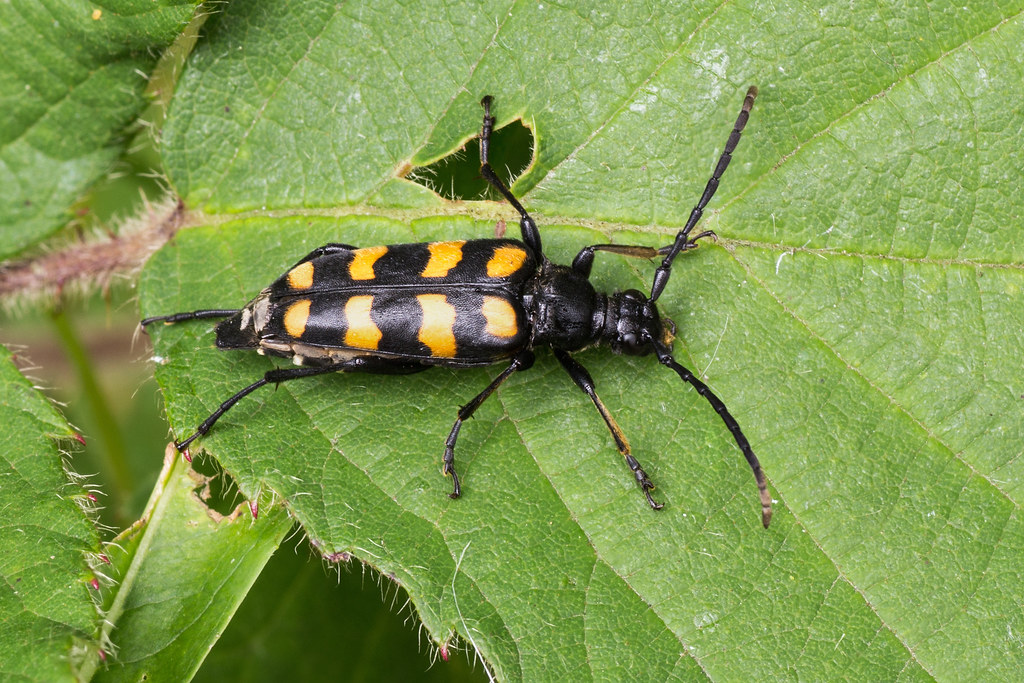 A little while back, while we were sitting with neighbors at camp, we noticed a bug walking along the floor of the porch. Strange looking thing…really ugly! They asked what it was. That was easy.

It was a longhorn beetle.

Although you don’t see them often, they are pretty common around the world, including Maine. Oh, I forgot. They are called banded longhorn beetles. There are over 20,000 species worldwide, 1,200 of which occur in North America.

Adult longhorn beetles, Typocerus velutinus, vary greatly in shape, size and color. In general, they are cylindrical and rather long-bodied. Some of the larger ones can reach six inches in length, but most species measure around two to three inches long. Some are dull brown, while others have bright colors or intricate patterns on their wing covers.

But the dominant part of their bodies are their antennae. They can reach at least two-thirds as long as the body, and in some species the antennae are longer than the body. Males have longer antennae than females. Some are slow moving, while others can run quickly or are strong fliers. Depending on the species, adults may be observed feeding on flower parts, leaves or bark.

Banded Longhorn Beetles have extremely long antennae (horns) like their other relatives. Their bodies are colored in alternating bands of red and yellow. The head and pronotum are black. A thin band of yellow separates the pronotum from the head and abdomen. They are wider at the ‘shoulders’ and taper at the tip of the abdomen. Antennae are black and segmented. Legs are yellow with black ‘feet’.

They are often found on flowers, eating the pollen of a variety of species though they seem to favor parsley, carrot and celery flowers. Look for them in herb, vegetable, and flower gardens. Adult beetles can also be found on hardwood trees. Eggs are laid on dead or decaying trees where larvae hatch and begin boring into the wood. Look for larval frass, a mix of feces and sawdust, on the trunk or near the base of the tree. It is produced as a larva digs and is expelled as the tunneling deepens. This species’ larvae seem to prefer birch, sumac and goldenrod. Examine fallen trees and rotting logs in mixed wood forests for signs of the Banded Longhorn Beetle.

Longhorn beetles have many natural enemies, especially parasitic wasps and the larvae of certain other beetles. Many birds feed on adults and woodpeckers are fond of the larvae. Lizards sometimes lie in wait and capture adults when the beetles land on bark to mate or lay eggs.

Adults can be found on hardwood trees. Eggs are laid on the dead or decaying trees where lavae hatch, boring into the wood. Look for larval frass, a mix of feces and sawdust created when the larva tunnels deeper. This species seems to prefer birch, sumac and goldenrod, of which there are plenty in central Maine. They can be found in 38 states, seven Canadian provinces, mostly in eastern Canada, and Mexico.

Partly because of their relatively slow rate of reproduction, the survival of some species of longhorn beetles is endangered. For example, the valley elderberry longhorn beetle is threatened with extinction in California. Development and farming along river banks have destroyed much of this beetle’s natural habitat.

And then, you have the Asian longhorn beetle, which have become a serious threat to some of North America’s most beautiful and popular trees. Native to parts of Asia, the beetle is believed to have arrived in North America in the wooden packing material used in cargo shipments from China. Isolated Asian Longhorn Beetle infestations have been discovered in Brooklyn and Amityville, New York, and in Chicago, Illinois. In all instances where Asian longhorn beetles have been found, authorities have reacted quickly to stop the infestation from spreading.

Trees favored by the Asian longhorn beetle are predominantly maples, but infestations have also been discovered in horse chestnuts, poplars, willows, elms, mulberries and black locusts. Currently, there are no known chemical or biological defense against the Asian longhorn beetle and, in North America, they have few natural predators. In all cases of infestation, the affected trees are cut down and the wood destroyed.

In concluding, if you see a banded longhorn beetle, they are scary looking, but quite harmless to humans.

Who holds the record for hitting the most home runs in Red Sox history?