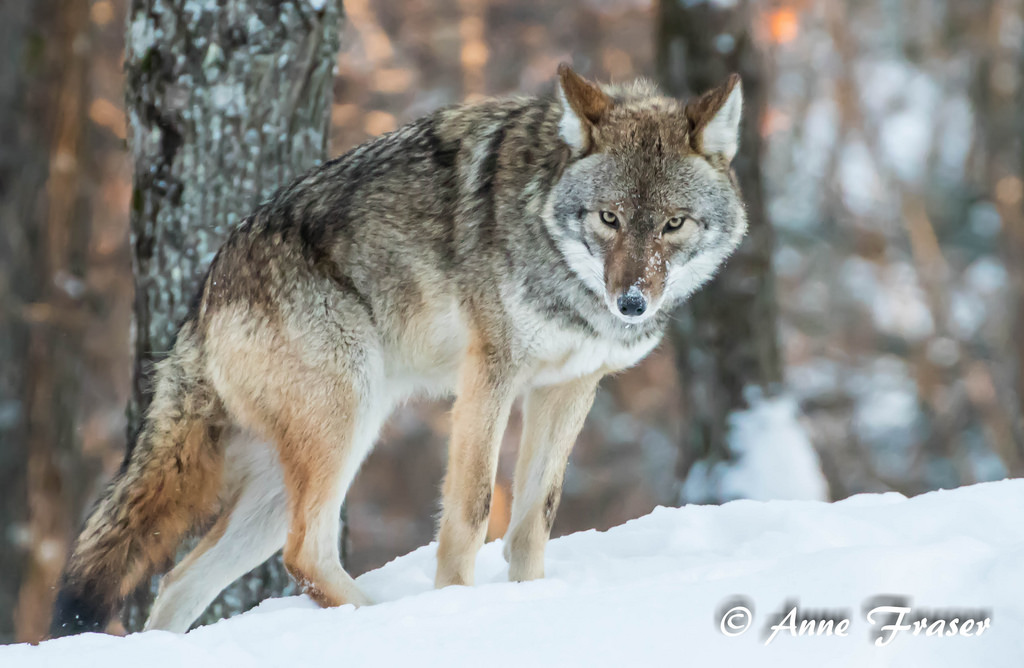 A friend of The Town Line sent an email to me last week asking about what appears to be an increase in the number of sightings of coyotes in the China/Vassalboro vicinity. She noted a reported deer kill on China Lake and one that had been hit by a car on Lakeview Drive, in China.

If you like old western cowboy films, you always have a scene where the trail hands, or the outlaws planning their next bank heist, are camping out at night, while listening to the coyotes barking nearby. Or, as I have experienced, been out in the wilderness on a fishing trip, and hearing the coyotes off in the distance, while we sit around an evening campfire.

We have visited with coyotes before, but it may be time to take another look at the distribution of this predator.

First of all, let me say there are an estimated 15,000 coyotes in the state of Maine, according to Wally Jakubas, the leader in mammal studies for the Maine Department of Inland Fisheries and Wildlife. There have been sightings of coyotes in both urban and rural areas, in all parts of the state.

In the urban areas they tend to hunt smaller game, such as rabbits, mice, woodchucks, beavers, squirrels and birds. But coyotes are also scavengers and will seek out garbage, garden crops, livestock and poultry. Even pet food left outside.

The Eastern coyote has long been recognized by state biologists as a coyote-wolf hybrid, first documented in Maine in the early 1900s. But, what sets the Maine coyotes apart from the others is that they are destined to become a bigger, bolder, more aggressive wolf-like animal and in time will pose a much greater risk to our deer population.

Roland Kays, a leading researcher of coyote DNA at the North Carolina Museum of Natural Sciences, has said the Eastern coyote found in Maine is becoming more like a wolf, as natural selection favors the dominant wolf genes that make it a bigger, more effective predator than its western counterpart.

Kay says the Eastern coyote has about eight percent wolf DNA, and that percentage will increase over time. Although inevitable, the process will take some time, and that it could be another century before the coyote will look much different than it does today.

Genetic evidence suggests it happened when the wolf population in the Great Lakes region was at its lowest point when they were heavily hunted and killed. So, basically, some wolf female came into heat and couldn’t find a wolf, so they did the next best thing: breed with a coyote.

The skull, therefore, is bigger and wider, which allows them more room in their jaw muscles. With that, they can take down much larger prey.

The Eastern coyote has colonized rapidly in the last 50 years. In the 1960s, there were approximately 500 of the animals in Maine, as compared to an estimated 15,000 today.

Even though it is believed an adult Eastern coyote still can’t kill the largest white-tailed deer, there is a consensus among hunters that this is not true. Registered Maine Guide Paul Laney, who hunts coyotes in Washington County, claims he has seen a coyote take down a buck.

They like to hunt deer in the winter when snow depths restrict the movement of the deer herd. The state, in the meantime, has instituted an aggressive campaign to protect the deer population, estimated to be at 200,000 since the 1980s, from coyotes. That includes a year-round coyote hunt with no bag limit. However, according to many who hunt coyotes, they are the most challenging animals to outwit. Despite that, the effort to protect the deer herd is working. Maine Guides believe the deer population would be in grave danger if the coyotes were left unchecked in the forest.

It is important to protect the deer herd as it contributes largely to the Maine economy. In 2013, more than 84 percent of all who hunt pursued the white-tailed deer. According to a survey commissioned by the state of Maine, the hunting that year provided a total economic contribution to the state’s coffers of $101 million.

All animals have a place in our ecology, but it is also important for man to sometimes intervene in the balance.

In 2010, what Red Sox rookie became the only player in AL history to hit a grand slam home run on the first pitch of his first major league at bat of his career.