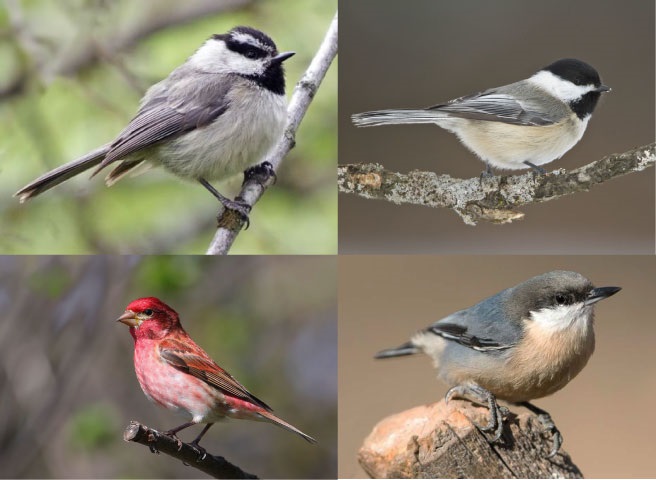 A 40-year study conducted by the Audubon Society has found that more than half of 305 bird species in North America are spending the winter about 35 miles farther north than they did 40 years ago. Some of these birds include chickadees, robins and owls.

Bird ranges can expand for many reasons, among them urban sprawl, deforestation and the backyard feeders.

The study suggests that the reason so many birds over such a broad area are wintering in more northern locations is climate change.

The study of migration habits from 1966 through 2005 found that about a quarter of the species have moved farther south. But the number moving northward (177 species) is double that amount.

Of all the birds, the purple finch was the biggest mover. Its wintering grounds are now more along the latitude of Milwaukee, Wisconsin, instead of Springfield, Missouri.

Over the four decades covered by the study, the average January temperature in the United States rose by about five degrees. That warming was most pronounced in northern states, which have already recorded an influx of more southern species and could see some northern species move into Canada.

The study also provides support for what many bird watchers across the country have long thought – that many birds are responding to climate change by moving farther north.

Previous studies of breeding birds in Great Britain and the eastern U.S. have noticed similar trends. But the Audubon study covers a broader area and includes many more species.

Examples of these are the purple finch and the boreal chickadee. They are spending their summers in the forests of Canada and fly south into the U.S. for the winter. Climate change could be playing a role in why they are not flying as far south as they used to. This is reflected in the fact that these species of birds are no longer as common as they once were in states like Maine and Vermont.

The Audubon Society likes to conduct their bird counts in mid-December. At that time of year, temperature is the primary driver for where birds go and whether they live or die.To survive the cold, birds need to eat enough during the day to have the energy needed to shiver through the cold nights.

With the milder winters that the northeast has been experiencing in that four-decade span, it is possible that birds don’t need to expend as much energy shivering, and can get by eating less food in the day.

However, researchers cannot explain why some certain species are moving. It’s speculated that changes in temperature affect different birds in different ways.

Researchers don’t know for a fact that it is warming. But when they keep finding the same thing over and over, they reason that it is not just a figment of the imagination.

Over the past 40 years, the Christmas Bird Count has documented shifts to the north or inland for the majority and for nearly every kind of North American bird species. Audubon’s analysis confirms the evidence from bird enthusiasts who have frequently reported changing populations.

Given the strong evidence that global warming is indeed a key factor in documented bird movements, shifts like these will continue for familiar species — for better or worse — as long as the climate continues to change. Though these movements clearly point to significant ecological disruption underway, their short and long term impacts will vary for specific species and even groups.

Among all landbirds in the study, 64 percent showed significant northward movement, including more than 70 percent of all woodland birds and 70 percent of those that frequent feeders.

Among the birds that depend on feeders, such as Boreal Chickadee and Pygmy Nuthatch, have moved hundreds of miles since 1966. Already adapted to human surroundings, they are unusually well-suited to a shifting climate. Most will fare well in the short term, as long as food is provided to them. However, northern-wintering birds are highly vulnerable to the sudden onset of cold and stormy conditions. They are also likely to further disrupt ecosystem balance by forcing out less adaptable species.

Woodland birds that do not visit bird feeders, such as Spruce Grouse and Barred Owl, also showed long-distance northward movements. Their continued survival in northern winters will depend on healthy forest habitat, which is already at risk due to both the drying effects of global warming and over-development by humans.

Grassland birds are among the few groups that did not move north over the past 40 years, but are the most vulnerable. Only 10 of 26 (38 percent) grassland species moved north significantly, while nine moved south. Many probably could not move into northern areas despite increasingly moderate temperatures, because conversion to human uses such as crops, pastures, and hayfields, has greatly reduced availability of grassland habitat. These species are facing an uncertain future.

These little creatures of Mother Nature are wonderful to watch, track and photograph, as they go about their daily routines. In the process, they are trying to tell us something. We need to take note.

The NBA’s Memphis Grizzlies formerly played in what Canadian city?