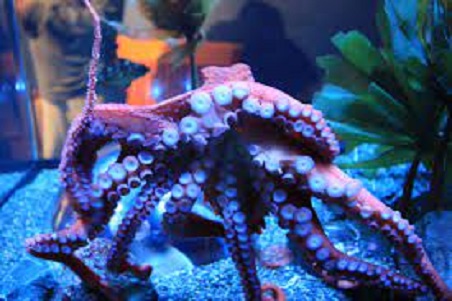 I saw an article recently in one of the local newspaper that fossils of an octopus were found in Montana, probably dated back before dinosaurs, some 330 million years. Let’s take a look at these denizens of the deep, at a creature we really don’t know that much about. We know what they look like, and some of what they do, but for what else would they be useful .

An octopus is a soft-bodied, eight-limbed mollusk. The soft body can radically alter its shape, enabling octopuses to squeeze through small gaps. They trail their eight appendages behind them as they swim. Octopuses have a complex nervous system and excellent sight, and are among the most intelligent and behaviorally diverse of all invertebrates.

Octopuses inhabit various regions of the ocean, including coral reefs, pelagic waters, and the seabed; some live in the intertidal zone and others at abyssal depths. Most species grow quickly, mature early, and are short-lived. In most species, the male uses a specially adapted arm to deliver a bundle of sperm directly into the female’s mantle cavity, after which he becomes senescent and dies, while the female deposits fertilized eggs in a den and cares for them until they hatch, after which she also dies. Strategies to defend themselves against predators include the expulsion of ink, the use of camouflage and threat displays, the ability to jet quickly through the water and hide, and even deceit. All octopuses are venomous, but only the blue-ringed octopuses are known to be deadly to humans.

The giant Pacific octopus is often cited as the largest known octopus species. Adults usually weigh around 33 pounds, with an arm span of up to 14 feet.

The skin consists of a thin outer epidermis with mucous cells and sensory cells, and a connective tissue dermis consisting largely of collagen fibers and various cells allowing color change. Most of the body is made of soft tissue allowing it to lengthen, contract, and contort itself. The octopus can squeeze through tiny gaps. Lacking skeletal support, the arms work as muscular hydrostats and contain longitudinal, transverse and circular muscles around a central axial nerve. They can extend and contract, twist to left or right, bend at any place in any direction or be held rigid.

The ink sac of an octopus is located under the digestive gland. A gland attached to the sac produces the ink, and the sac stores it. The sac is close enough to the funnel for the octopus to shoot out the ink with a water jet. Before it leaves the funnel, the ink passes through glands which mix it with mucus, creating a thick, dark blob which allows the animal to escape from a predator.[61] The main pigment in the ink is melanin, which gives it its black color. Cirrate octopuses usually lack the ink sac.

The reproduction of octopuses has been studied in only a few species. One such species is the giant Pacific octopus, in which courtship is accompanied, especially in the male, by changes in skin texture and color. About 40 days after mating, the female giant Pacific octopus attaches strings of small fertilized eggs (10,000 to 70,000 in total) to rocks in a crevice or under an overhang. Here she guards and cares for them for about five months (160 days) until they hatch. In colder waters, such as those off Alaska, it may take up to ten months for the eggs to completely develop.

Octopuses have a relatively short lifespan; some species live for as little as six months. The Giant Pacific Octopus, one of the two largest species of octopus, may live for as much as five years. Octopus lifespan is limited by reproduction. For most octopuses the last stage of their life is called senescence. It is the breakdown of cellular function without repair or replacement. For males, this typically begins after mating. Senescence may last from weeks to a few months, at most. For females, it begins when they lay a clutch of eggs. Females will spend all their time aerating and protecting their eggs until they are ready to hatch. During senescence, an octopus does not feed and quickly weakens. Lesions begin to form and the octopus literally degenerates. Unable to defend themselves, octopuses often fall prey to predators. The larger Pacific striped octopus (LPSO) is an exception, as it can reproduce multiple times over a life of around two years.

Most species are solitary when not mating, though a few are known to occur in high densities and with frequent interactions, signaling, mate defending and eviction of individuals from dens. This is likely the result of abundant food supplies combined with limited den sites.

The octopuses evolved from the Muensterelloidea (fossil pictured) in the Jurassic period.

They evolved in the Cambrian some 530 million years ago. The earliest octopus likely lived near the sea floor in shallow marine environments. Since octopuses consist mostly of soft tissue, fossils are relatively rare. As soft-bodied cephalopods, they lack the external shell of most molluscs.

I once tasted calamari while in Vietnam, mostly as jerky – it was a little salty.

Historically, the first plural to commonly appear in English language sources, in the early 19th century, is the Latinate form “octopi”, followed by the English form “octopuses” in the latter half of the same century. The Hellenic plural is roughly contemporary in usage, although it is also the rarest. Oxford American Dictionary (3rd Edition, 2010) lists “octopuses” as the only acceptable pluralization, and indicates that “octopodes” is still occasionally used, but that “octopi” is incorrect.

Well, I hope we now know a little more about these creatures.

How many Boston Red Sox players have been named World Series MVP?