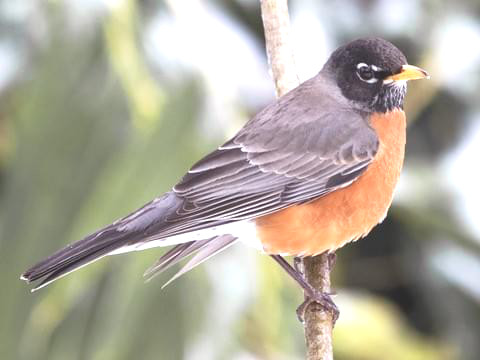 Just the other day a friend told me she thought robins went south for the winter. That is the common thought.

The American robin, Turdus migratorius, is a migratory songbird. While robins occasionally overwinter in the northern United States and southern Canada, most migrate to Florida and the Gulf Coast to central Mexico. Most will depart south by the beginning of September and begin their northern migration in February and March, which gives the illusion that they don’t migrate during a regular winter, when snow covers the ground during those times.

Despite being depicted in the film Mary Poppins, in London, this species is actually a rare occasion to western Europe.

Robins breed in woodland and more open farmland and urban areas. It becomes less common as a breeder in the southernmost part of the deep south of the United States.

The sexes are similar but the female tends to be duller than the male, with a brown tint to the head, brown upperparts and less bright underparts. However, some birds cannot be safely sexed on plumage alone.

Robins are active mostly during the day. During the winter, they flock in large groups at night to roost in trees in swamps or dense vegetation. The flock breaks up during the day when the birds feed on fruits and berries in smaller groups. However, during the summer, the American robin defends a breeding territory and is less social.

The adult robin, however, must stay alert. It is preyed upon by hawks, cats, and larger snakes. Brown-headed cowbirds lay eggs in robin nests but robins usually reject the cowbird eggs. Juvenile robins and eggs are preyed upon by squirrels, snakes and some birds such as blue jays, common grackles, crows and ravens.

The robin is the state bird of Connecticut, Michigan and Wisconsin. It ranks behind only the red-winged blackbird as the most abundant bird species in North America, just ahead of the European starling.

American robins have an extensive range, estimated at 6.2 million square miles. The International Union for Conservation of Nature (IUCN) lists the bird as “least concern” when evaluating its position as a threatened species. At one point, the robins were hunted for their meat, but it is now protected throughout its range in the United States by the Migratory Bird Act.

The species was first described in 1766 by Carl Linnaeus in the 12th edition of his Systema Naturae. The term robin has been recorded since 1703.

Despite is wonderful song, the American robin is known to carry West Nile virus. While crows and jays are often the first noticed deaths in an area with West Nile virus, the American robin is suspected to be a key host, and holds a larger responsibility for the transmission of the virus to humans. This is because, while crows and blue jays die quickly from the virus, robins survive the virus longer, thus spreading it to more mosquitoes, which then transmit the virus to humans.

Robins eat primarily (approximately 60 percent) on wild and cultivated fruits and berries, and (approximately 40 percent) on invertebrates, such as earthworms, beetle grubs, caterpillars and grasshoppers. That ability to switch to berries allows them to winter much farther north than most other North American thrushes, of which it is a member of that family.

The answer to the question as to whether they go south for the winter or not, is that it does migrate, but some don’t travel as far as others, and some will stay behind, probably depending on the severity of the winter. Their return in February and March also contributes to the belief that they don’t migrate.

Where did MLB’s Atlanta Braves originate?

The correct answer to last week’s question, when was the last time an Eastern Conference team in the NBA won the league championship should have read the Toronto Raptors in 2019.