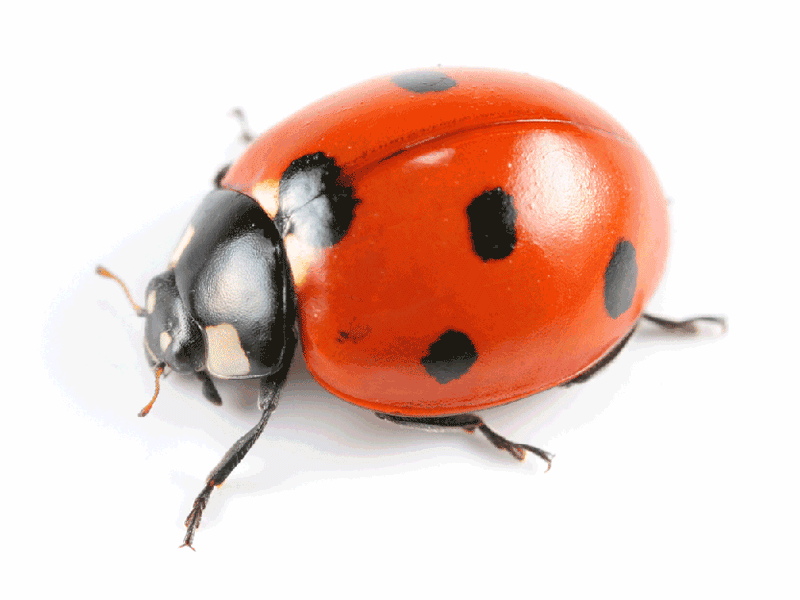 Ladybug, ladybug, fly away home
Your house is on fire and your children are gone
All except one, and that’s Little Anne
For she has crept under the warming pan.

The ladybug as immortalized in the still-popular children’s nursery rhyme. They have been, for very many years, a favorite insect of children. But what about these little bugs that appear in our houses at certain times of the year?

Well, they come from the beetle family Coccinellidae, and are found worldwide with over 5,000 species, with more than 450 native to North America.

It is known by numerous names, but only in the U.S. is it called a ladybug. Other names include ladybirds, God’s cow, ladycock, lady cow and lady fly. Scientists increasingly prefer the name ladybird beetle, as ladybugs are not true bugs.

Coccinellids are small insects, and are commonly yellow, orange, or scarlet with small black spots on their wing covers, with black legs, head and antennae. A common myth is that the number of spots on the insect’s back indicates its age.

For the sake of this column, let’s refer to Coccinellids by the commonly-known name, ladybug.

A few species are considered pests in North America and Europe, but they are generally considered useful insects, as many species feed on aphids or scale insects, which are pests in gardens, agricultural fields, orchards and similar places. These insects were introduced into North America from Asia in 1916 to control aphids, but is now the most common species as it is out-competing many of the native species. While predatory species are often used as biological control agents, introduced species of ladybugs out-compete and displace native insects, and become pests in their own right.

Ladybugs are brightly colored to ward away potential predators. Mechanical stimulation — such as by predator attack — causes reflex bleeding in both larval and adult lady beetles, in which an alkaloid toxin is exuded through the joints of the outer shell, deterring feeding. Ladybugs are known to spray a toxin that is venomous to certain mammals and other insects when threatened.

These insects overwinter as adults, aggregating on the south sides of large objects such as trees or houses during the winter months, dispersing in response to increasing day length in the spring. Eggs hatch in three to four days from clutches numbering from a few to several dozen. Depending on resource availability, the larvae pass through four phases over 10-14 days, after which pupation occurs. After a molting period of several days, the adults become reproductively active, and are able to reproduce again. Total life span is one to two years on average.

Predatory ladybugs are usually found on plants where aphids or scale insects are, and they lay their eggs near their prey, to increase the likelihood the larvae will find the prey easily. A larva uses its sharp jaws to crush an aphid’s body and sucks out the aphid’s juices.

The most common plants where you will find ladybugs include any type of mustard plant, such as other early blooming nectar and pollen sources, like buckwheat, coriander, red or crimson clover, and legumes, and also early aphid sources such as bronze fennel, dill, coriander, caraway, angelica, tansy, yarrow of the wild carrot family, dandelions and scented geraniums.

These insects are sensitive to synthetic insecticides.

Many cultures consider ladybugs lucky. In many countries, including Russia, Turkey and Italy, the sight of a ladybug is either a call to make a wish or a sign that a wish will soon be granted.

In Christian areas, they are often associated with the Virgin Mary, and the name that this insect bears in various languages in Europe corresponds to this. Though historically many European languages referenced Freyja, the fertility goddess of Norse mythology, in the names, the Virgin Mary has now largely supplanted her.

For example, freyjuhoena (Old Norse), and Frouehenge (Norwegian) have been changed into marihone, which corresponds with Our Lady’s Bug.

Although the ladybugs are beneficial insects to have around, they still gather the curiosity of children. In the animated film, A Bug’s Life, Francis the Ladybug (voiced by Dennis Leary) is an aggressive beetle and the clown in P.T. Flea’s circus. The contrast between him being a male and a “lady”bug, is a recurring joke in the film.

Don’t squish that ladybug, it will keep unwanted insects off your plants, and even entertain the children and grandchildren.

Red Sox player Dustin Pedroia recently announced his retirement. He won the American League MVP award in 2008, becoming only the second Red Sox second baseman to do that. Who was the other?