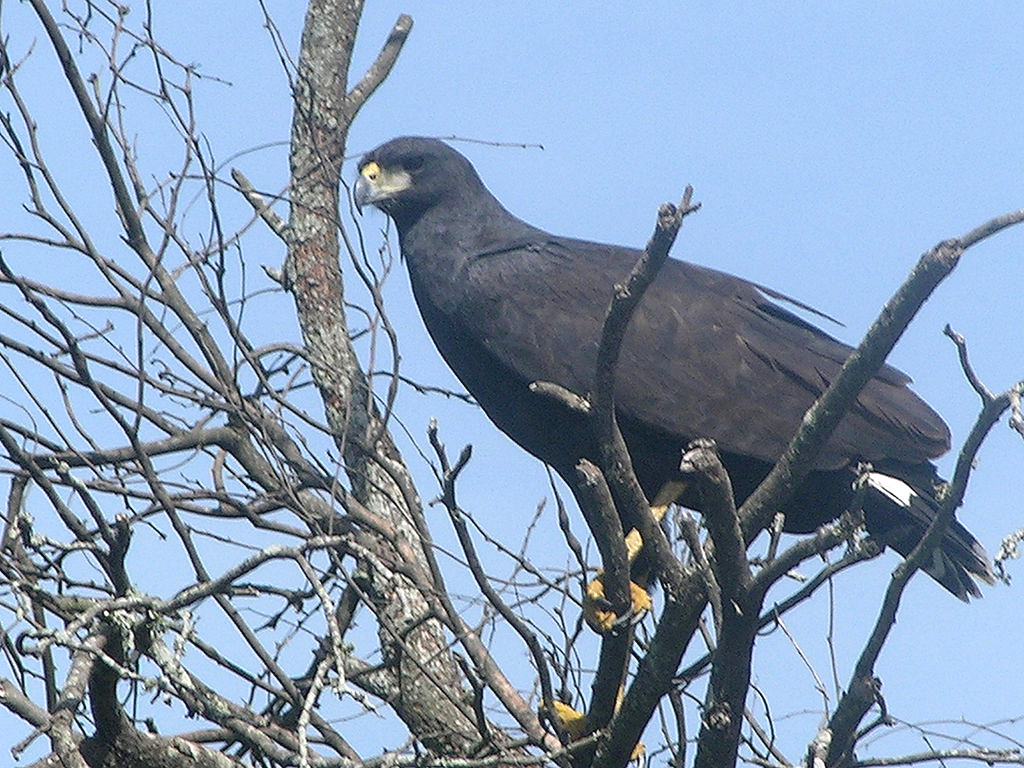 Maine’s famous great black hawk was back in the news last week when it was announced that the raptor, which succumbed to its wounds last year, was going on display at the Maine State Museum, in Augusta, following its preparation by taxidermist, Tom Berube, of Poland. The mount of the rarely seen South American raptor appropriately depicts it standing over a squirrel.

The great black hawk, the first of its kind known to visit Maine, was originally spotted in Biddeford in August 2018. It disappeared for a while, only to reappear in Portland’s Deering Oaks Park, in November, stalking a gray squirrel. The park is known for its abundant population of squirrels. During its brief stay in Deering Oaks, it didn’t lack for food. 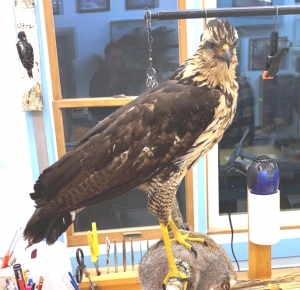 The first photos of the great black hawk mount destined for the Maine State Museum were posted on Facebook by hunter Christi Holmes, who saw the finished mount at Tom Berube’s taxidermy studio, in Poland. (photo by Christi Holmes)

It was rescued during a snowstorm on January 20, 2019, and transported to the Avian Haven bird rehabilitation facility, in Freedom, in an attempt to rehab the raptor. The bird was euthanized on January 31, 2019, because of extensive frostbite which prevented blood from reaching either leg or foot.

While at the rehab facility, the bird received national attention. “This bird is certainly our most famous patient,” Diane Winn, the executive director of Avian Haven, where the hawk was being treated, wrote in an email to Audubon.

According to Audubon, “from its usual haunt at Deering Oaks Park, in downtown Portland, the hawk occupied itself by hunting squirrels and rats and fared well despite the snowy conditions, according to its many attentive onlookers.

“Then, the mercury dropped.

“On an icy Sunday morning, with temperatures hovering around 8°F, a man strolling through the park discovered the hawk on the ground, unable to stand. He was soon joined by a skier who recognized the famed animal from signs hanging around the park, which also advertised Avian Haven’s phone number in case the hawk appeared in distress. She brought the bird home in a cardboard box, called up the rescue, and arranged for its transport through a volunteer-run shuttle. The drive usually takes an hour and a half; on January 20, it took almost four hours on the sleet-covered roads.

“The hawk was unresponsive when it left Portland. But along the route, in the car’s welcome heat and shelter, it began perking up. The bird opened its eyes at a handoff between drivers, and was active by the time it arrived at the hospital in early evening, according to a Facebook post by Avian Haven. Hospital staff bandaged the bird’s feet and by morning it was alert and standing.

“After a full exam and initial bloodwork, a staff veterinarian said the hawk would lose part of its outer toe to frostbite, but was doing well and eating meals of mice with gusto. Now, the big question looming over the recovering bird is what happens next.”

The bird had originally been sighted in South Padre Island, in Texas, in April 2018.

According to Louis Bevier, a research biologist at Colby College, in Waterville, it could be the same great black hawk spotted in Texas last year. The Maine great black hawk had similar markings as those of the Texas bird, which identified it as a juvenile. It is often mistaken for a common black hawk.

With regard to diet, it is a generalist, feeding primarily on rodents, bats, birds, fish, crabs, reptiles, and amphibians; there also are reports of these hawks eating fruit and eggs, often while pursuing its prey on foot. This species can be seen soaring above woodlands. Along the Amazon river, its normal range, it has been seen raiding hoatzin – nesting colonies looking for eggs and chicks. Hoatzins, also known as the reptile bird, skunk bird, stinkbird, or Canje pheasant, is a species of tropical bird found in swamps, riparian forests, and mangroves of the Amazon and the Orinoco basins in South America. It is notable for having chicks that have claws on two of their wing digits.

The great black hawk belongs to the same family as the bald eagle, and all others of the eagle species.

The great black hawk is large but slender, at about 22-25 inches in length. Despite its size, it weighs about 2-1/2 pounds. Adults have very broad wings, and is mainly black. The short tail is white with a broad black tip. The bill is black and the legs and cere are yellow. The sexes are similar, but young birds have dark brown above with spotting and steaks. Their underparts are buff with dark spots, and the tail has a number of black and dusky bars. The call of the great black hawk is a distinctive piping ooo-pwheeeeee.

It was determined what the age of the great black hawk was, but why it was attempting a relocation to much colder weather conditions is not known.

This particular great black hawk is not the first bird to visit our state from other, far away, places on the planet. Other species to have wandered here came from as far away as southern Europe, Asia, Africa, but are not indigenous to North America.

So, in one respect, the great black hawk that visited Maine lives on, as it can be seen on display at the Maine State Museum, in Augusta.

Like all taxidermy work, it lets the animal live on in a way, and many people will get to admire him up close at the Maine State Museum.

What was the last Eastern Conference team in the NBA to win the league title?