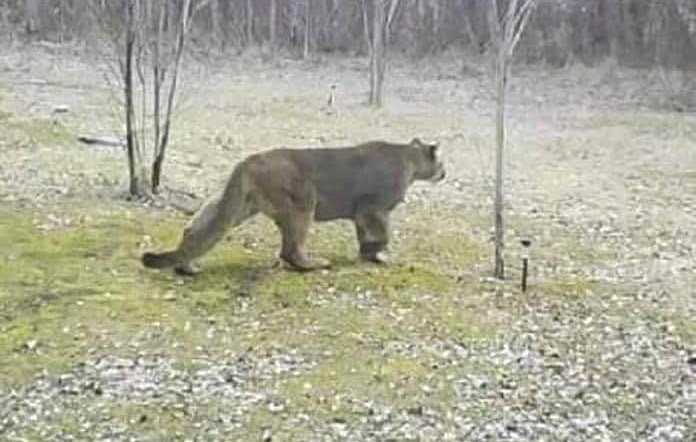 There has been a long-going debate as to whether mountain lions, also known as cougars, are present in Maine.

The official word from the Maine Department of Inland Fisheries and Wildlife is that they do not exist. Officials at the department state, “No known cougar populations exist in Maine.” Although Maine once had a cougar population, they have long been officially listed as extirpated. Wildlife spokesmen say that, “if cougars existed here, we would have trapped one by now, or killed one on the highway.”

I have maintained for years that they do exist. I have not personally seen one, but many signs have been spotted. However, my son, who lives in Rome, told me he saw one in his driveway one day about seven years ago. He described to me what he saw and it fit the description of a mountain lion to a “T.” It was large for a cat, light brown/beige, and exhibited the long tail that seems to drag on the ground, and it was club-like on the end. But not seeing it, I could not definitely say it was one.

While hunting on a logging road in Windsor one year, I came across some feline paw prints in the mud that measured four-and-a-half inches across. Mighty large paw prints for a house cat, or even a lynx or bobcat.

On a fishing trip up north on Harrington Lake, outside my friend’s lodge, one morning, again in the mud near some remnants of that winter’s snow, I, again, saw the same size print.

All signs, but yet no sightings. 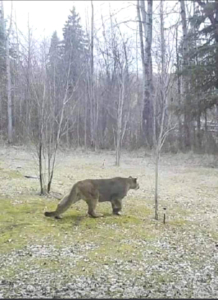 Uncropped version of photo above.

Another time I became aware of an actual sighting was several years ago, when a woman from Palermo called me to say she had spotted a cougar at the end of her driveway, near the road, because she had been alerted by her barking dog. When she looked out the window to see what the fuss was about, she spotted the large cat. Needless to say, she went outside to retrieve her dog.

All fine and good, but still no clear photographs of an actual cougar.

Well, then came Christmas morning of this year. While going through my emails, I saw one from Mark Pantermoller, of Fairfield, who sent a photo shot from a game camera near his property, that was definitely a clear, crisp photo of a mountain lion.

I’ve been criticized in the past for saying that mountain lions existed in Maine, but I think we now have the proof that is necessary to uphold my beliefs.

In an article written by V. Paul Reynolds, in a Special to the Piscataquis Observer, dated July 27, 2020, he states:

“In a way, the elusive and mysterious cougar has become somewhat of a Maine folklore icon, the Maine equivalent of Bigfoot in the Pacific Northwest. Anybody who spends time in the outdoors and enjoys the pure anticipation of sighting wild animals, has to be intrigued by the mere idea that there might be a real mountain lion around the next corner on a woods road, or over there along the edge of that meandering dead water.”

The Maine cougar question has become intriguing because the scientific community and the general public seem to contradict each other. The state officials continue to contend the cougar does not exist in Maine.

Again, according to Reynolds,

“On the other hand, anecdotal cougar-sighting reports by laymen have been on the upswing. And this doesn’t seem to jibe with pronouncements from officialdom.”

According to the Piscataquis Observer article, “Last month the Northwoods Sporting Journal invited readers to share their mountain-lion sighting reports. The monthly outdoor magazine received more than 20 cougar-sighting accounts from readers, and published some of them. Witnesses ranged from loggers, trappers and hunters to housewives and fall leaf peepers. Personal interviews suggested that witnesses seemed credible, rational and sincere. All but one reported seeing a large, long-tailed sandy or tawny-colored cat. This past winter in Lubec the town was abuzz with cougar sightings reports. Reporter Karen Holmes recounted in the Quoddy Tides more than a half dozen cougar sightings by Lubec area residents!”

On one occasion, a retired biologist with the California Fish and Game department, who worked with mountain lions on the west coast and owns a camp near West Grand Lake, Maine, says he saw a black mountain lion not far from West Grand Lake. He says it was 15 feet away from him when it ran off. A sighting claim by a man who worked with the animals out west, and more than likely, knows one when he sees one.

Unfortunately, many game cameras have captured the elusive cat in its lens, but the quality of the photos have been so poor that biologist poo-poo them as either Canada lynx or bobcats. But in every photo is the prolific, long, club-like tail of the mountain lion.

Whether you believe it or not, evidence is continuing to mount, along with eye witness accounts from people who seem credible and sincere, that the mountain lion has made a comeback in the state of Maine.

Name the six teams the New England Patriots have defeated in their Super Bowl victories.