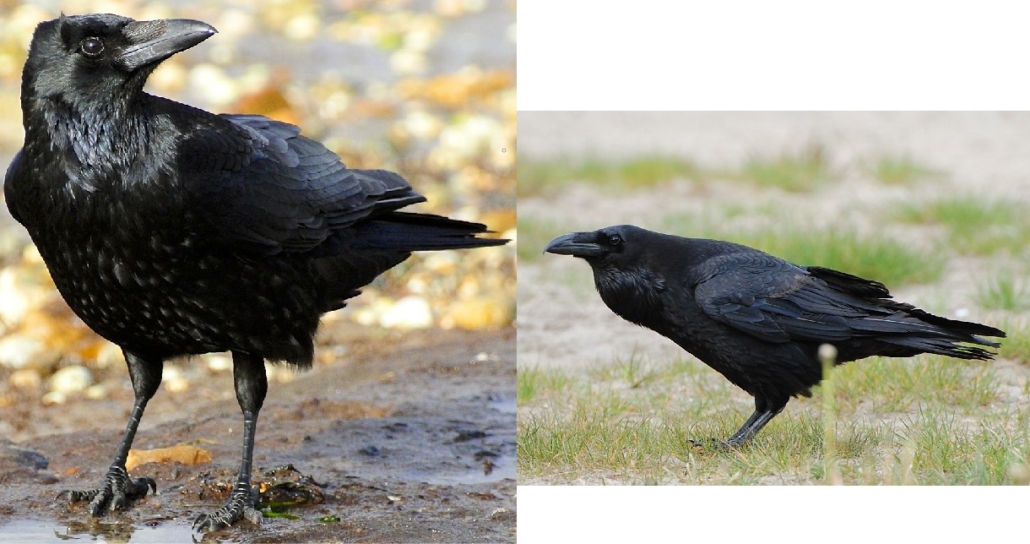 Crow, left, and a raven.

Last week I observed that many different kinds of birds have been coming to our feeders this winter, and I compared the situation with the Alfred Hitchcock thriller film, The Birds – actually, crows, ravens, seagulls, and sparrows were used in the film. (Did you know, The Birds is a political allegory about the psychological violence of capitalism and the fear-mongering of the Cold War – filmed in 1963. Fear of nuclear attack is apparent when the birds “cover the bay like a white cloud”, suggestive of a nuclear mushroom cloud.)

Anyway, back to the subject matter.

Well, I have another chapter in that episode. I have noticed recently the high number of crows, or ravens, that have been hanging around my house. Just the other day, I saw seven of them sitting in my pine trees in the backyard. They are huge birds.

Just to draw a comparison, there was a gray squirrel – either Martha or Stewart, my resident squirrels, are pretty good sized squirrels – on one of the other branches, and these birds made it look like a field mouse. The squirrel was dwarfed by these birds. They were also licking their chops. However, the crows’ stout bill is not strong enough to break through the skin.

Later that day, while driving by the park that is located at the end of my street, there were about two dozen of these birds feeding on the banking that was bare of snow.

Where are they coming from. And are they crows, or ravens like some people are calling them?

Well, to cut to the chase, crows have a fan-shaped tail, while ravens’ tails are wedge-shaped. The birds I’m looking at have a fan-shaped tail. Obviously, there are a few differences between the two species. Most of the differences are noticeable when the two are together. However, crows will assemble in large flocks, while ravens tend to be solitary, until the fall migration.

Both the crows and the ravens are highly intelligent birds. Perhaps the most intelligent. The two can learn to imitate a variety of sounds, including the human voice. Recent research has found crows not only use tools, but also tool construction. Their intelligence quotient is equal to that of many non-human primates.

Crows also have a good memory, remembering where there is danger, and where their cache of food is for later consumption.

Predators include owls and hawks. Crows will gather together to move an offending or intruding owl or hawk. However, West Nile disease has been taking its toll on crow populations.

A couple of years ago, while fishing on Webber Pond, my wife and I noticed a large flock of crows headed for a tree that sat on a point. Apparently, a bald eagle was intruding on a nest, the crows mobbed the eagle and drove it off. That was interesting to watch.

Crows don’t regularly visit feeders, but you can attract them to your backyard if you offer a mix of trees, open space, and food. Peanuts left in an open place are a good attractant. Crows are also attracted by compost, garbage, or pet food that the birds can feed on.

American Crows congregate in large numbers in winter to sleep in communal roosts. These roosts can be of a few hundred up to two million crows. Some roosts have been forming in the same general area for well over 100 years. In the last few decades some of these roosts have moved into urban areas where the noise and mess cause conflicts with people.

So, taking all these things into consideration, the large black birds hanging around my house are most likely crows. But the question as to where they come from and why they are hanging around, has not been answered. In the past, I have seen massive numbers of crows fly overhead in late fall. But they continue in a northwesterly direction, darkening the sky as they passed.

This year, they are making themselves right at home around my house.

Tampa Bay will be making only its second appearance in the Super Bowl. Name the four teams to never play in a Super Bowl.