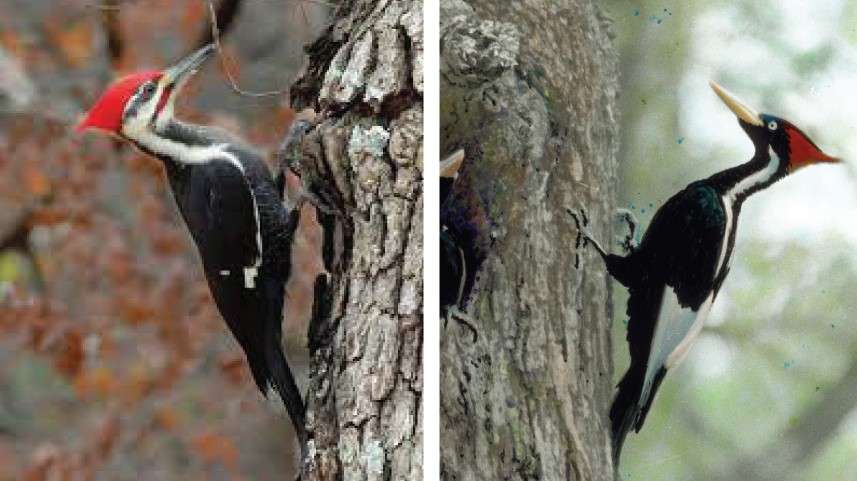 You catch a fast-moving, swooping bird navigate through the thick forest of trees. It looks more like a shadow. What was that? It lands on the trunk of a nearby tree, and begins a slow, rolling whacking sound against the bark of that dead tree. You look closer, it’s a pileated woodpecker.

Although very common in the eastern United States, it can sometimes be quite elusive. You don’t generally see them often, because they prefer the protection of dense deciduous or coniferous forests.

The pileated woodpecker, Dryocopus pileatus, lives in Canada from British Columbia east to Nova Scotia. It can be found in most areas of the eastern United States, and west from Washington state south to California and east to Idaho and North Dakota.

Their numbers have increased from 1966 to 2014, according to the North American Breeding Bird Survey. Partners in Flight estimates a global breeding popultion of 1.9 million with 67 percent living in the U.S. and 33 percent in Canada.

The reason for the subject of this bird this week is the numerous photos that readers have been sending to this newspaper.

I have seen several of these birds around camp, and even saw one, once, sitting on an apple tree stump in my backyard, in the middle of Waterville.

The pileated woodpecker is one of the biggest forest birds on the continent. It is close in size to the crow.

They drill distinctive rectangular-shaped holes in rotten wood to get at carpenter ants and other insects. They are loud with whinnying calls. They also drum on dead trees. There flight is undulated (a bounding motion) as opposed to other birds straight flight paths.

Besides carpenter ants, pileated woodpeckers like woodboring beetle larvae, termites and other insects such as flies, spruce budworm, caterpillars, cockroaches and grasshoppers. They will also eat wild fruits and nuts. However, ants comprise 40 percent of their diet. Occasionally, you will find a pileated woodpecker at backyard feeders for seeds or suet.

Building a nest is quite a construction project that can last up to six weeks. The male begins excavating the nest cavity and does most of the work. The entrance hole is oblong rather than the circular shape of most woodpecker holes. For the finishing touches, the bird climbs all the way into the hole and chips away at it from the inside. The female begins to contribute as the nest nears completion. The cavity depth can be from 10 to 24 inches.

Of course, then you have the disagreement on how to pronounce the name. Well, in actuality, it can be pronounced two ways. You can use he soft “i” as in pill-ee-ated, or the hard “i” in pile-ee-ated. So, now we should have no more arguments about that subject.

So, if you see that large woodpecker in Maine woods, you are most probably seeing a pileated woodpecker.