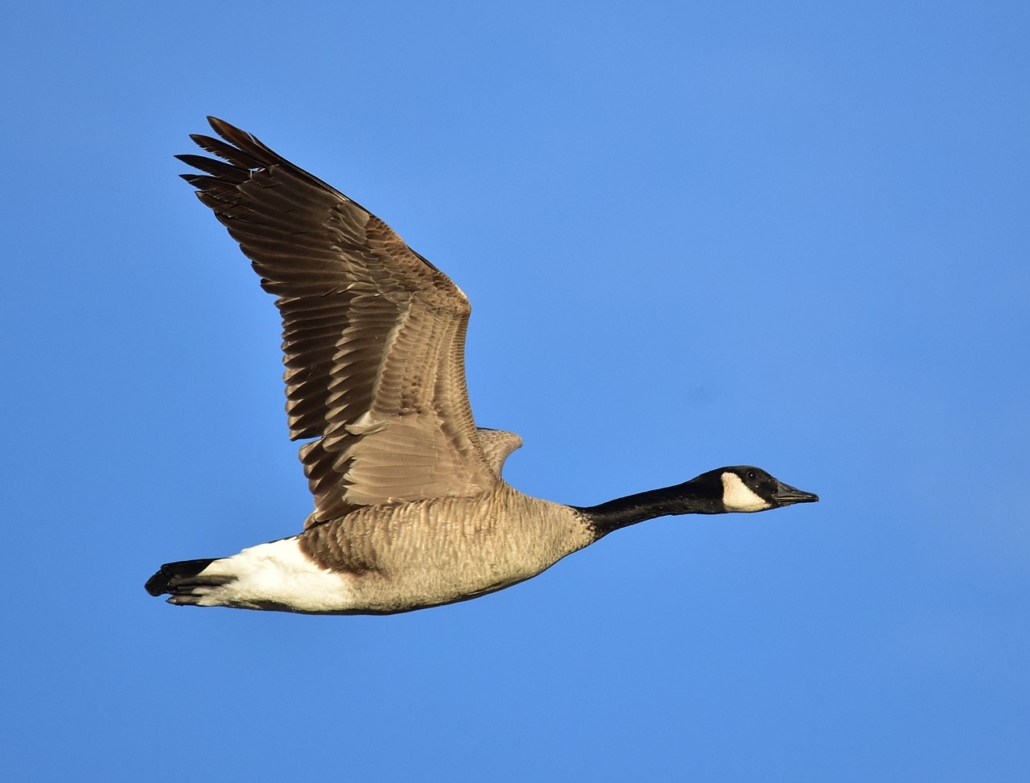 We’ve all heard them. The honking sounds overhead as the Canada geese move south in their familiar V formation. Let’s learn a little more about these large birds that at one time were considered extinct.

The Canada goose, Branta canadensis, is a large wild goose species. It is native to arctic and temperate regions of North America, and its migration occasionally reaches northern Europe. Like most geese, the Canada goose is primarily herbivorous and normally migratory; it tends to be found on or close to fresh water.

Extremely skilled at living in human-altered areas, Canada geese have established breeding colonies in urban and cultivated habitats, which provide food and few natural predators. The success of this common park species has led to its often being considered a pest species because of its excrement, its depredation of crops, its noise, its aggressive territorial behavior towards both humans and other animals, and its habit of begging for food (caused by human hand feeding).

The Canada goose was one of the many species described by Carl Linnaeus in his 18th-century work Systema Naturae.

According to the Oxford English Dictionary, the first citation for the ‘Canada goose’ dates back to 1772. The Canada goose is also colloquially referred to as the “Canadian goose”. A persistent urban legend gives the name origin as after an ornithologist surnamed “Canada,” but this is false.

Canada geese range from 30 to 43 inches in length and have a 50–73 inch wingspan. The male Canada goose usually weighs 5.7–14.3 pounds. The female looks virtually identical, but is slightly lighter at 5.3–12.1 pounds, and generally 10 percent smaller in linear dimensions than the male counterparts. The honk refers to the call of the male Canada goose, while the hrink call refers to the female goose. The calls are similar, however, the hrink is shorter and more high-pitched than the honk of males.

This species is native to North America. It breeds in Canada and the northern United States in a wide range of habitats. The Great Lakes region maintains a very large population of Canada geese. Canada geese occur year-round in the southern part of their breeding range, including most of the eastern seaboard and the Pacific coast. Between California and South Carolina in the southern United States and northern Mexico, Canada geese are primarily present as migrants from further north during the winter.

By the early 20th century, overhunting and loss of habitat in the late 19th century and early 20th century had resulted in a serious decline in the numbers of this bird in its native range. The giant Canada goose subspecies was believed to be extinct in the 1950s until, in 1962, a small flock was discovered wintering in Rochester, Minnesota. Harvey K. Nelson, talked Forrest Lee into leaving Minnesota to head the center’s Canada goose production and restoration program. Forrest soon had 64 pens with 64 breeding pairs of screened, high-quality birds. The project involved private, state, and federal resources and relied on the expertise and cooperation of many individuals. By the end of 1981, more than 6,000 giant Canada geese had been released at 83 sites in 26 counties in North Dakota. With improved game laws and habitat recreation and preservation programs, their populations have recovered in most of their range, although some local populations may still be declining.

In recent years, Canada goose populations in some areas have grown substantially, so much so that many consider them pests for their droppings, bacteria in their droppings, noise, and confrontational behavior. This problem is partially due to the removal of natural predators and an abundance of safe, man-made bodies of water near food sources, such as those found on golf courses, in public parks and beaches, and in planned communities. Due in part to the interbreeding of various migratory subspecies with the introduced nonmigratory giant subspecies, Canada geese are frequently a year-around feature of such urban environments.

Contrary to its normal migration routine, large flocks of Canada geese have established permanent residence along the Pacific coast of North America from south-western British Columbia (specifically Vancouver Island and British Columbia’s Lower Mainland), south to the San Francisco Bay area of Northern California. There are also resident Atlantic coast populations, such as on Chesapeake Bay, in Virginia’s James River regions, and in the Triangle area of North Carolina (Raleigh, Durham, Chapel Hill), and nearby Hillsborough. Some Canada geese have taken up permanent residence as far south as Florida, in places such as retention ponds in apartment complexes. In 2015, the Ohio population of Canada geese was reported as roughly 130,000, with the number likely to continue increasing. Many of the geese, previously migratory, reportedly had become native, remaining in the state even in the summer. The increase was attributed to a lack of natural predators, an abundance of water, and plentiful grass in manicured lawns in urban areas.

Canada geese are primarily herbivores, although they sometimes eat small insects and fish. Their diet includes green vegetation and grains. The Canada goose eats a variety of grasses when on land. The Canada goose also eats beans and grains such as wheat, rice, and corn when they are available. In the water, it feeds from aquatic plants.

In urban areas, it is also known to pick food out of garbage bins. They are also sometimes hand-fed a variety of grains and other foods by humans in parks. Canada geese prefer lawngrass in urban areas. They usually graze in open areas with wide clearance to avoid potential predators.

Canada geese are known for their seasonal migrations. Most Canada geese have staging or resting areas where they join up with others. Their autumn migration can be seen from September to the beginning of November. The early migrants have a tendency to spend less time at rest stops and go through the migration much faster. The later birds usually spend more time at rest stops. Some geese return to the same nesting ground year after year and lay eggs with their mate, raising them in the same way each year. This is recorded from the many tagged geese which frequent the East Coast.

Flying in the V formation has been the subject of study by researchers. The front position is rotated since flying in front consumes the most energy.

The lifespan in the wild of geese that survive to adulthood ranges from 10 to 24 years.

Once they reach adulthood, due to their large size and often aggressive behavior, Canada geese are rarely preyed on, although prior injury may make them more vulnerable to natural predators. Beyond humans, adults can be taken by coyotes and grey wolves. Avian predators that are known to kill adults, as well as young geese, include snowy owls, golden eagles and bald eagles and, though rarely on large adult geese, great horned owls, and peregrine falcons. Adults are quite vigorous at displacing potential predators from the nest site, with predator prevention usually falling to the larger male of the pair. Canada geese are quite wary of humans where they are regularly hunted and killed, but can otherwise become habituated to fearlessness towards humans, especially where they are fed by them. This often leads to the geese becoming overly aggressive towards humans, and large groups of the birds may be considered a nuisance if they are causing persistent issues to humans and other animals in the surrounding area.

In North America, nonmigratory Canada goose populations have been on the rise. The species is frequently found on golf courses, parking lots, and urban parks, which would have previously hosted only migratory geese on rare occasions. Owing to its adaptability to human-altered areas, it has become one of the most common waterfowl species in North America. Canada geese are protected from hunting and capture outside of designated hunting seasons in the United States by the Migratory Bird Treaty Act, and in Canada under the Migratory Birds Convention Act. In both countries, commercial transactions such as buying or trading are mostly prohibited and the possession, hunting, and interfering with the activity of the animals are subject to restrictions.

Canada geese have been implicated in a number of bird strikes by aircraft. Their large size and tendency to fly in flocks may exacerbate their impact. In the United States, the Canada goose is the second-most damaging bird strike to airplanes, with the most damaging being turkey vultures. Canada geese can cause fatal crashes when they strike an aircraft’s engine. The FAA has reported 1,772 known civil aircraft strikes within the United States between 1990–2018.

As a large, common wild bird, the Canada goose is a common target of hunters, especially in its native range. Drake Larsen, a researcher in sustainable agriculture at Iowa State University, described them to Atlantic magazine as “so yummy…good, lean, rich meat. I find they are similar to a good cut of beef.”

In 2000, the North American population for the geese was estimated to be between 4 million and 5 million birds.

The Boston Celtics and Los Angeles Lakers have each won 17 NBA titles. Which two franchises are tied for third on the list.