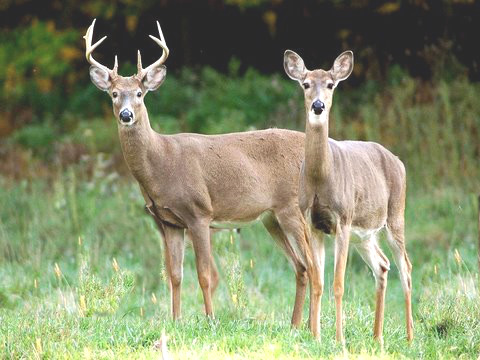 My wife and I spent last weekend at the Harbor Ridge Resort, in Southwest Harbor. It was a quiet weekend, especially enjoying the view of the harbor below our unit. Saturday afternoon, while we were both comfortably sitting in the living room, reading our favorite authors, my wife noticed something moving on the slope.

There they were, two magnificent white-tailed deer: a buck and a doe. Both large beautiful specimens. The buck had eight points, but walked with a very noticeable limp on its left foreleg. Otherwise, the pair seemed healthy.

They plodded along slowly, very deliberate in their strides, seemingly unfazed by any of their surroundings.

My wife and I watched in silence until the two deer disappeared from our sight line.

That got me to thinking. How do these animals survive our winters? So, I decided to do some research on the white-tailed deer.

I had recently read an article that said the “mild” winter so far made it easier for the deer to move in search of food.

White-tailed deer have developed a set of adaptations that enable them to survive the deep snow and cold temperatures that occur in Maine. Maine is the northern-most point of their range and there are very few of them north of the St. Lawrence River. Also, the further north you go in their range, the larger the body size, as compared to their counterparts to the south.

According to Maine Department of Inland Fisheries and Wildlife biologists, deer shed their hair in the spring and fall. The summer hair has solid shafts and lacks the undercoat, but the winter hair has hollow hair shafts, and dense, wool-like under fur, providing effective insulation.

Their winter habitat is also important. Dense softwood canopies intercept more snow, resulting in reduced snow depths. Gathering in these areas also allow many deer to share the energy cost of maintaining a trail network to access food and to escape predators. The forest surrounding the resort where we stayed was mostly white birch.

According to the Maine Department of Inland Fisheries and Wildlife, Maine has actively monitored for CWD each year since 1999, and since that time screened approximately 9,000 wild deer. Thus far, Maine proudly remains CWD free.