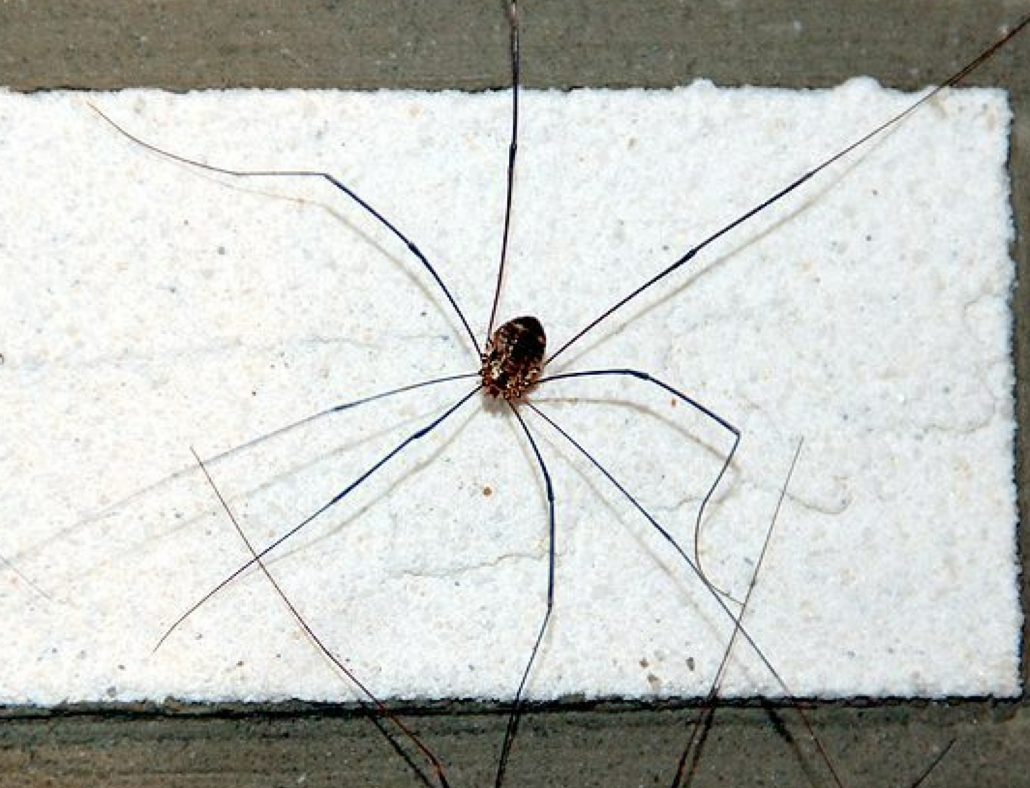 Well, they are. You could be sitting on the deck or porch at camp, and there’s one on your leg, or walking across your shoulders. Go do some garden work, and you’ll see them there. Deadhead flowers in your beds, yup, they’re there, too. Go fetch a couple of sticks out of the wood pile, Bingo! More of them. They are actually “everywhere” and can be a nuisance.

What am I talking about? Daddy Longlegs. It was Jim Stafford who sang, “I don’t like spiders and snakes,” and it usually applies to me. I think he had me in mind when he wrote the song. However, Daddy longlegs don’t bother me too much. They are tolerable, not like those other scary looking, eight-legged creatures.

According to entomologists at the University of California, Riverside, the term “daddy longlegs” is commonly used to refer to two distinct types of creatures: opilionids arachnids with pill-shaped bodies and eight long legs are actually not spiders, and pholcids, which have long legs and small bodies, and thus resemble opilionids, but which are truly spiders.

What we refer to as daddy longlegs are actually called harvestmen. You see them almost every day. They are not spiders – although closely related – but belong to a group with many different species, called opiliones. The common name daddy longlegs came about because of their small oval body and long legs, and the name harvestmen because they are most often seen in large numbers in the late summer and early fall around harvest time.

So, how about the old legend, “daddy longlegs are one of the most poisonous spiders, but their fangs are too short and weak to bite humans?”

This tale has been lurking around for years. I have heard it repeatedly. This is incorrect, an urban myth. Most folks who retell this tale have no idea that they are referring to two completely separate groups of animals, daddy longlegs and daddy longlegs spiders.

Daddy longlegs spiders are venomous predators, and although they never naturally bite people, their fangs are similar in structure to those of brown recluse spiders, and therefore can theoretically penetrate skin. For these reasons, this is most probably the animal to which people refer when they tell the tale.

The daddy longlegs we see are the harvestmen – not spiders – and can actually be beneficial. They have a very broad diet that includes spiders and insects, and plant pests such as aphids. They will also feast on caterpillars, beetles, flies, mites, small slugs, snails, earthworms, other harvestmen, and decaying plant and animal matter. Daddy longlegs also scavenge for dead insects and will eat bird droppings. Control should only be performed when absolutely necessary. The clustering behavior only occurs during the fall and for only a brief period of time. If necessary, no need for pesticides, a broom or a vacuum will suffice.

Last weekend, I noticed a harvestman (daddy longleg) carrying a small moth across our deck at camp. I watched it for a while, and observed that it was struggling with the weight of the moth. Finally, the daddy longleg dropped the moth, ate its fill, and left. I kept going back from time to time to see the moth still laying on the deck. After a while, I don’t know whether it was the wind, or the harvestman returned, but the moth had disappeared.

Daddy longlegs legs easily break off. They have the ability to break off legs similar to the ability of lizards to break off a portion of their tail if being attacked by a predator. But it can have an adverse affect on them, especially if its the second set of legs.

The daddy longlegs’ second pair of legs serve as ears, nose, tongue and perhaps even as supplementary “eyes.” The legs are loaded with nerves and literally thousands of tiny sense organs that lie inside microscopic slits in the legs. They can produce a pungent odor that is distasteful to most predators.

Although they can be pests, they have a place in the ecosystem.

It’s going to be difficult, but you now should refer to those eight long-legged animals as daddy longleg harvestmen, and not spiders.