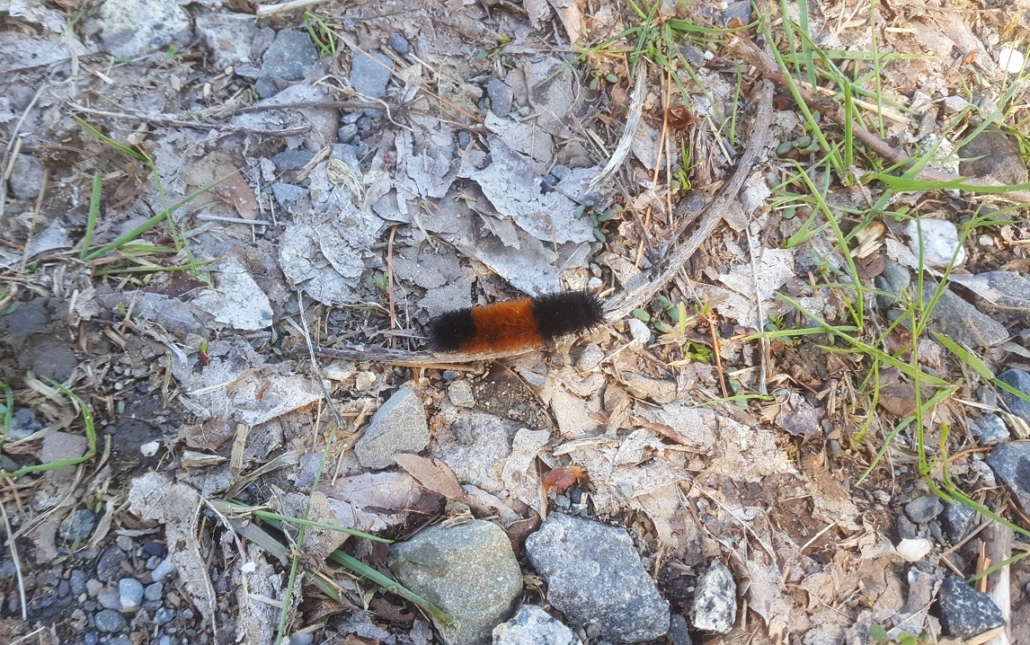 Woolly bear caterpillar that was seen in the parking lot at The Town Line newspaper on May 4. (photo by Roland D. Hallee)

When I arrived at work on Monday, on my way into the office, I noticed a woolly bear caterpillar walking along the ground.

Woolly bears are most visible during September and October. Where did this one come from in May? It was a loner and obviously keepling it’s social distance from other woollies.

The woolly bear caterpillar—also called woolly worm or fuzzy worm – has the reputation of being able to forecast the coming winter weather. Whether this is fact or folklore, can be left up to the interpreter!

Here’s the legend: The Woolly Bear caterpillar has 13 distinct segments of either rusty brown or black. The wider the rusty brown sections (or the more brown segments there are), the milder the coming winter will be. The more black there is, the more severe the winter.

If you recall, woolly bears sighted last fall contained a much larger rust band than black, indicating a mild winter. That is exactly what we experienced. It just didn’t predict the length of the “winter,” which doesn’t seem to want to go away. But that is nothing.

Does anyone remember the blizzard of April 6 – 7, 1982? The unusual nor’easter pummeled the region, dropping up to 30 inches of snow in the central Maine area. There were high winds and numerous power outages throughout the state. I was a district manager for a daily newspaper at the time, and was forced to meet the storm head on, actually staring death in the face when I encountered a state snow plow, approaching from the opposite direction, nearly head on in white out conditions. Only my quick reflexes – I was much younger then (I was 34) – saved me. When people complain about the lateness of the last storm here, on April 9, I always point to April 6 – 7, 1982.

In the fall 1948, Dr. C. H. Curran, curator of insects at the American Museum of Natural History, in New York City, took his wife 40 miles north of the city to Bear Mountain State Park to look at woolly bear caterpillars.

Dr. Curran collected as many caterpillars as he could in a day, determined the average number of reddish-brown segments, and forecast the coming winter weather through a reporter friend at The New York Herald Tribune.

Dr. Curran’s experiment, which he continued over the next eight years, attempted to prove scientifically a weather rule of thumb that was as old as the hills around Bear Mountain. The resulting publicity made the woolly one of the most recognizable caterpillars in North America (alongside the monarch caterpillar and tomato hornworm).

The caterpillar Curran studied, the banded woolly bear, is the larval form of Pyrrharctia isabella, the Isabella tiger moth.

If you find an all-black woolly caterpillar, don’t worry—this doesn’t mean that we’re in for a severe, endless winter! It’s just a caterpillar of a different species, and is not used for forecasting. The same is true for all-white woolly caterpillars.

Woolly bears, like other caterpillars, hatch during warm weather from eggs laid by a female moth.

Mature woolly bears search for overwintering sites under bark or inside cavities of rocks or logs. That’s why you see so many of them crossing roads in the fall.

When spring arrives, woolly bears spin fuzzy cocoons and transform inside them into full-grown moths.

Typically, the bands at the ends of the caterpillar are black, and the one in the middle is brown or orange, giving the woolly bear its distinctive striped appearance.

Between 1948 and 1956, Dr. Curran’s average brown-segment counts ranged from 5.3 to 5.6 out of the 13-segment total, meaning that the brown band took up more than a good third of the woolly bear’s body. The corresponding winters were milder than average, and Dr. Curran concluded that the folklore has some merit and might be true.

But Curran was under no scientific illusion: He knew his data samples were small. Although the experiments legitimized folklore to some, they were simply an excuse for having fun.

Thirty years later, the woolly bear brown-segment counts and winter forecasts were resurrected by the nature museum at Bear Mountain State Park. The annual counts have continued, more or less tongue in cheek, since then.

If the rusty band is wide, then it will be a mild winter. The more black there is, the more severe the winter.

Most scientists discount the folklore of woolly bear predictions as just that, folklore. Mike Peters, an entomologist at the University of Massachusetts, doesn’t disagree, but he says there could, in fact, be a link between winter severity and the brown band of a woolly bear caterpillar. “There’s evidence,” he says, “that the number of brown hairs has to do with the age of the caterpillar – in other words, how late it got going in the spring. The [band] does say something about a heavy winter or an early spring. The only thing is … it’s telling you about the previous year.”

Every year, the woolly worms do indeed look different – and it depends on their region. So, if you come across a local woolly bear, observe the colors of the bands and what they foretell about your winter weather.

So, what about seeing one in the spring. Woolly Bears nearly freeze solid during hibernation. Their body produces a chemical called a cryoprotectant that acts like an antifreeze which protects their organs and body tissues from being damaged from freezing. Once spring arrives and the outdoor temperatures begin to warm to the high 40s and 50s the caterpillar thaws and becomes active again. The Woolly Bear will soon spin a cocoon and pupate, eventually emerging as an adult Tiger Moth. When the caterpillar emerges as an adult it will have a short life span where it will need to find a mate and lay its eggs to complete the life cycle. The adult moth will only live for one to two weeks. They have no mouth parts so they essentially starve to death.

To watch the process evolve, you witness one of the true miracles of nature.

Before joining the Red Sox, Manny Ramirez spent seven years with which team?