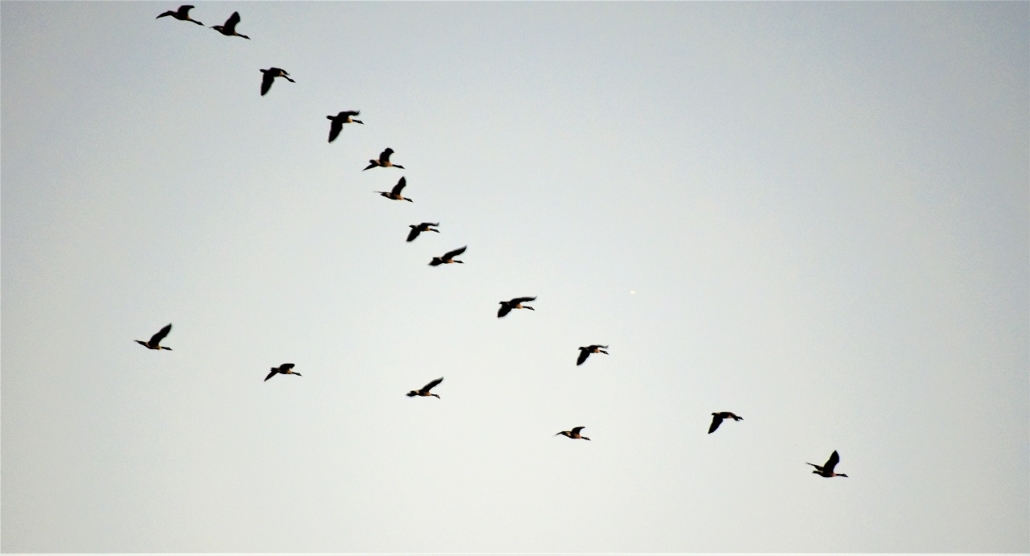 My wife and I had a good friend visit with us last week, and following many different conversations, she asked the question, “Why are Canada geese flying north in November?”

According to the Cornell Lab of Ornithology, there are several possibilities, but in fall it’s likely these are family groups moving around, now that the yearlings can fly, in search of feeding grounds. Canada geese raise their young near water, where the goslings can feed and, if necessary, dive or swim away to escape predators. In late summer the adults temporarily become flightless as they molt their wing feathers. This usually takes about six weeks, during which the geese remain grounded. Once the young have learned to fly, and the parents have regained their flight, the whole family will take off from their nesting grounds to find more productive feeding areas – and this movement could be in any direction. This happens in the late summer before the massive southward migration as temperatures drop across the continent.

First and second year geese (not old enough to breed – most Canada Geese don’t breed until they are four years old), along with those that lost nests early in the breeding season also undertake a molt migration. Individuals may move several to hundreds of miles during the late spring and summer to large bodies of water where they will be safer as they molt their wing feathers. In September and October many of these individuals will be returning from this seasonal journey, and again may be seen flying in almost any direction.

Also, bear in mind that there are increasingly large numbers of resident Canada Geese across North America. These birds do not migrate at all, and so you may see them at any time of year flying in any direction. Their numbers have been growing exponentially since the mid-20th century and they have begun to be seen as nuisances in some communities.

Canada Geese are of low concern conservation-wise and have increased in numbers between 1966 and 2015, according to the North American Breeding Bird Survey. The total North American population in 2015 was between 4.2 million to over 5.6 million.

The proliferation of lawns, golf courses and parks offers Canada Geese such reliable habitat that in some areas the birds stay all year round instead of migrating like they used to do in the past.

Canada Geese are especially drawn to lawns for two reasons: they can digest grass, and when they are feeding with their young, manicured lawns give them a wide, unobstructed view of any approaching predators.

Our friend noted that these geese were in their flight V formation, and there were three separate groups.

Johnnie St. Vrain, of Times-Call, states that what she may be seeing are geese that decided this is as far south as they needed to go. They probably came from further north in Canada. They’ll spend the night on a relatively large reservoir or lake where they feel safe. In the morning, they’ll fly out to whatever feeding grounds they have. They might be flying to a local park or to a nearby cornfield.

If their feeding ground is north of their roosting area, you’ll see them flying north in the morning, but you might miss them heading back south that evening.

Some of these winter geese fly in from neighboring states. Others fly down from the mountains to spend the season in front-range cities.

Geese are pretty well adapted. They will fly only as far south as they need to make a living.

Historically, most Canada geese would migrate through this area, with very few sticking around. But agriculture, specifically the grain left in farmers’ fields, has caused geese to spend winters here.

The geese that fly north-to-south in fall are less noticeable. They fly a couple thousand feet high.

But locally, large numbers of geese will sit out on a lake. Their warmth will keep the water open. The geese might move when we’ve had really cold weather and a lot of the lakes around here ice up and become unavailable. But we have enough warm days, that if there’s enough geese hanging out, it will create holes they can stay in. Or they’ll stay on the river, but they don’t like that as much.

Canada Geese mate for life with very low “divorce rates,” and pairs remain together throughout the year. They mate “assortatively.” Larger males mate with larger females and the smaller males mate with smaller females. In a given pair, the male is usually the larger of the two.

Migrating flocks generally include loose aggregations of family groups and individuals, in both spring and fall. Flights usually begin at dusk, but may begin anytime of the day, and birds fly both night and day. They move in a V-formation, with experienced individuals taking turns leading the flock.

Our friend lives on the river in Fairfield, which is probably why she sees these flocks of Canada geese flying north. There are many cornfields north of Fairfield.

It may be worth paying a little more attention to see if they return at night.

The New England Patriots have appeared in 11 Super Bowls, the most in NFL history. Name the three teams that are next with eight appearances each.

The answer can be found here.