While driving to work one morning before Christmas – one of those balmy days we had back then – I could smell the unmistakable odor of a nearby skunk. As a matter of fact, I smelled it two days in a row.

Strange time of year for skunks to be out and about. They usually go deep into their dens when the winter temperatures head south. 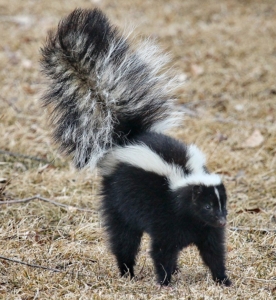 A skunk preparing to spray.

While growing up, I was told, by my grandfather, about the “seven sleepers.” Animals that “sleep” during the winter. Skunks were one of them. There are several animals that hibernate: skunks, bees, snakes, groundhogs and chipmunks. However, bears and bats are the most well-known.

There are several ways that animals respond to winter: they migrate, adapt or hibernate. But hibernation isn’t as simple as going to sleep for a couple of months. Although there are various degrees and duration hibernation always involves certain changes for animals. Their body temperature decreases, their breathing slows, and their metabolic rate drops.

It can be a lot of work, getting ready to hibernate. Many animals have to find or create that perfect, safe spot to bed down for months at a time, whether in a cave, a hollow tree, or a den dug into the ground. Usually, before hibernation, the animal has to increase its body fat to survive, which means eating much more than usual in the months leading up to winter. Although hibernation always happens in winter, many different things can act as the actual trigger for animals to start, including temperature drops, decrease in food availability, changes in day length and hormone changes.

Bears enter their dens for hibernation based on changes in the weather. They generally begin hibernating in September or October and emerge six to seven months later around April. During hibernation, bears don’t decrease their body temperature as much as some other hibernating species. This gives them the ability to warm up more quickly in response to danger.

But recently, animals’ hibernation patterns themselves may be at risk. New studies have found that as the winter temperatures heat up due to climate change, chipmunks in these warmer areas are less likely to hibernate. This raises the question about how climate change is affecting hibernation, migration and other ways animals cope with the changing seasons.

Spending a few months asleep may be a good way to get through the winter, but it’s not without its risks. If an animal isn’t able to store up enough fat, or find enough food after it awakens, it may not survive. And if a hibernating creature wakes up too early, they can burn through their fat reserves far too quickly, and die.

So, back to skunks.

Skunks are not true hibernators in the winter, but do den up for extended periods of time. However, they remain generally inactive and feed rarely, going through a dormant stage. Over winter, multiple females (as many as a dozen) huddle together, males often den alone. Often, they use the same den repeatedly from year to year.

Skunks are solitary animals when not breeding, though in the colder parts of their range, they may gather in communal dens for warmth. During the day, they shelter in burrows which they can dig with their powerful front claws. Males and females occupy overlapping home ranges through the greater part of the year, typically about 1.5 square miles for females and 7.7 square miles for males.

Although they have excellent senses of smell and hearing, skunks have poor vision, being unable to see objects more than about 10 feet away, making them vulnerable to death from collisions with automobiles.

So, even though we are now in January and heading into the teeth of winter, beware of that skunk who may just be attempting to cross the road at night. Skunks are nocturnal creatures.