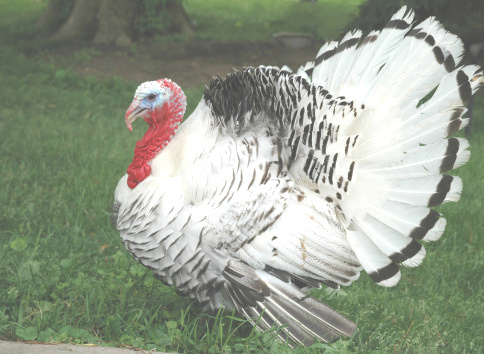 Traveling through rural Maine can be beautiful, both for its landscape and, secondly, its wildlife. Recently, I had two of those encounters.

On Sunday, while on our way to visit our granddaughter, and newly-born great-granddaughter, in Belgrade, we came across a rafter of turkeys crossing the road on Rte. 27. The first couple were ordinary turkeys (looking more domestic than wild), but the last one to cross the road, and with which I nearly collided because of its last minute surge out into the road, was a white turkey, with some black stripes on the tail.

My first thought: an albino turkey.

It turned out to be a Royal Palm turkey,

The Royal Palm is a breed of domestic turkey. One of the few turkeys not primarily selected for meat production, the Royal Palm is best known as an ornamental bird with a unique appearance, largely white with bands of metallic black. Primarily kept as an exhibition bird, or on small farms, it lacks the size for large scale commercial use. Toms usually weigh 16 to 22 pounds and the hens 10 to 12 pounds.

A relative newcomer among turkey breeds, the bird first appeared in the 1920s on a farm in Lake Worth, Florida, apparently as a cross between Black, Bronze, Narragansett, and native turkeys. Years of selective breeding followed to stabilize the coloring, and the Royal Palm was finally accepted by the American Poultry Association’s Standard of Perfection in 1971.

Along with the decline of most heritage turkey breeds after the adoption of the Broad Breasted White by the turkey industry, Royal Palms are a very endangered breed today. The breed is classified as being on “watch” status with the American Livestock Breeds Conservancy. It is also included in Slow Food USA’s Ark of Taste, a catalog of heritage foods in danger of extinction. The Australian and United States both report the breed as Endangered to the Food and Agriculture Organization of the United Nations.

The toms are noted for being non-aggressive, and the hens are particularly good mothers.

So, as it turns out, the bird with which I nearly collided is rare, in danger of extinction and probably should not have been allowed to roam free.

My other encounter is one that is more familiar. On my way to Palermo along Rte. 3 last Thursday, a red fox darted across the road in front of me, again, avoiding a collision with it.

The red fox is the largest of the true foxes and one of the most widely distributed members of the order Carnivora, being present across the entire Northern Hemisphere including most of North America, Europe and Asia plus parts of Northern Africa.

It is listed as least concern by the International Union for Conservation of Nature (IUCN.)

Its range has increased alongside human expansion, having been introduced to Australia, where it is considered harmful to native mammals and bird populations. Due to its presence in Australia, it is included on the list of the “world’s 100 worst invasive species”. 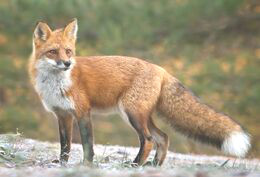 Red foxes are usually together in pairs or small groups consisting of families, such as a mated pair and their young, or a male with several females having kinship ties. The species primarily feeds on small rodents, though it may also target rabbits, game birds, reptiles, and invertebrates. Fruit and vegetable matter is also eaten sometimes. Although the red fox tends to kill smaller predators, including other fox species, it is vulnerable to attack from larger predators, such as wolves, coyotes, golden jackals and medium- and large-sized felines.

The species has a long history of association with humans, having been extensively hunted as a pest and furbearer for many centuries, as well as being represented in human folklore and mythology. Because of its widespread distribution and large population, the red fox is one of the most important furbearing animals harvested for the fur trade. Too small to pose a threat to humans, it has extensively benefited from the presence of human habitation, and has successfully colonized many suburban and urban areas.

Red foxes have binocular vision, but their sight reacts mainly to movement. Their auditory perception is acute, being able to hear black grouse changing roosts at 600 paces

The red fox is a wide-ranging species. Its range covers nearly 27 million square miles, including as far north as the Arctic Circle.

Red fox body language consists of movements of the ears, tail and postures, with their body markings emphasizing certain gestures. Postures can be divided into aggressive/dominant and fearful/submissive categories. Some postures may blend the two together.

Wolves may kill and eat red foxes in disputes over carcasses. In areas in North America where red fox and coyote populations are the same, fox ranges tend to be located outside coyote territories. The principal cause of this separation is believed to be active avoidance of coyotes by the foxes. Interactions between the two species vary in nature, ranging from active antagonism to indifference. The majority of aggressive encounters are initiated by coyotes, and there are few reports of red foxes acting aggressively toward coyotes except when attacked or when their kits were approached. Foxes and coyotes have sometimes been seen feeding together.

North American predators of red foxes include cougars, Canada lynxes and bobcats. Red foxes are among the most important fur-bearing animals harvested by the fur trade. Their pelts are used for trimmings, scarfs, muffs, jackets and coats. They are principally used as trimming for both cloth coats and fur garments, including evening wraps. The pelts of silver foxes are popular as capes

Red foxes have been exceedingly successful in colonizing built-up environments, especially lower-density suburbs, although many have also been sighted in dense urban areas far from the countryside. Throughout the 20th century, they established themselves in many North American cities.

City-dwelling red foxes may have the potential to consistently grow larger than their rural counterparts as a result of abundant scraps and a relative absence of predators. In cities, red foxes may scavenge food from litter bins and bin bags, although much of their diet will be similar to rural red foxes.

Many red foxes have been sighted by myself in the Center Vassalboro area along the Nelson, Seaward Mills and Cross Hill roads, as well as around our camp.

Who is the only Boston Red Sox pitcher to walk over 1,000 batters?