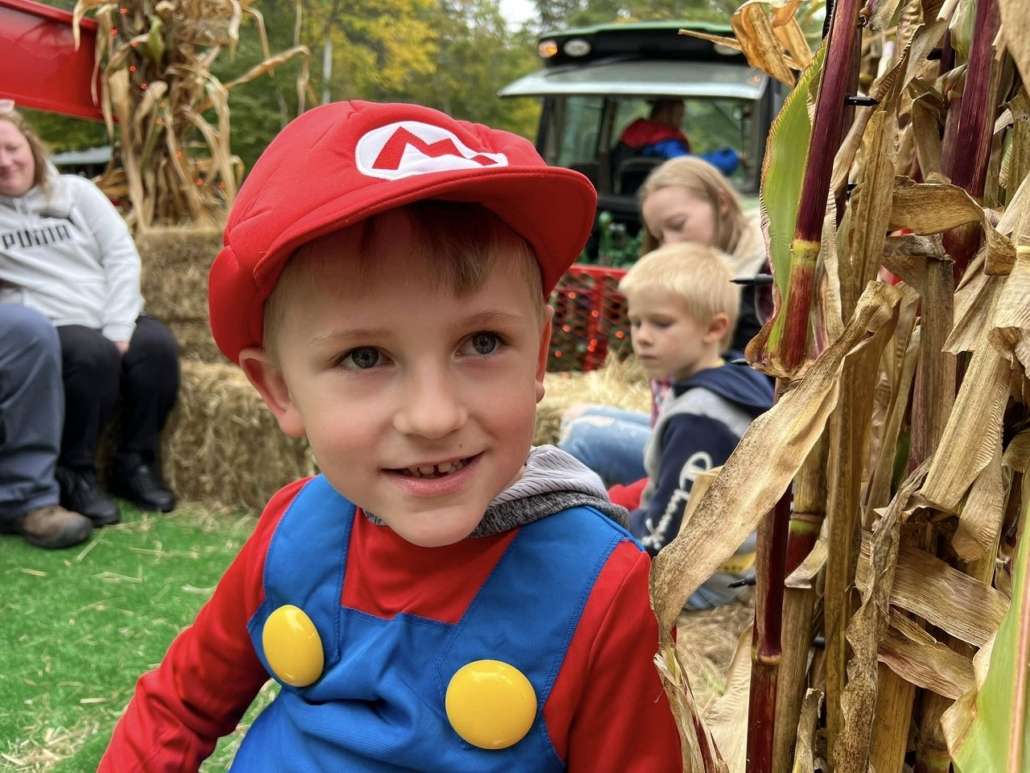 Mario: Six-year-old Liam Casey, of Palmyra, was ready to set off on the hayride dressed as Mario. (contributed photo) 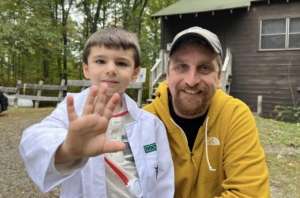 Dr. Brody: Five-year-old Brody Dyer-Dolley was dressed like a doctor for the event and attended with his dad Jacob Dolley. Brody is a Cub Scout, in Augusta. (contributed photo)

The public is advised that ghouls and skeletons were spotted skulking through the woods of Belgrade on Saturday, October 1. The public is further warned that aliens and Imperial Storm Troopers were also spotted in the vicinity of Great Pond at that same time. Reports have also come in of princesses, cartoon characters and dinosaurs at the same location. There is no cause for alarm. They were all gathered for the annual Haunted Woods program at Camp Bomazeen.

“Haunted Woods is a lot of fun,” said Bomazeen Camp Director Julie McKenney of Belgrade. McKenney runs the summer programs at the camp and is also the Program Chair for the Kennebec Valley District of Scouting that puts on the costumed-event for both the Scouts and the general public. “It is a great way to show off the camp and the programs of Scouting,” she said. “Kids love to get into costumes and spend a day here at camp running the obstacle course through the graveyard (ball field decorated with fake headstones and body parts), going through the haunted house at the dining hall and trying their hand at BB gun shooting. Lots of parents came dressed in costumes too this year. I am not sure if they had more fun or if their kiddos did.”

Violet LeBlanc, aged 4, was dressed as a dinosaur. She said that her favorite activity was decorating the pumpkins. She came to the event with her father, Brett LeBlanc, of Winthrop. Brett is the assistant leader of the Scout program in Manchester and his daughter will be joining next year when she will be old enough to be a Lion.

Campion Poulin and his dad Joe Poulin, of Oakland, ran the archery range. Campion dressed as a creepy skeleton. Joe Poulin serves as the Pine Tree Council training chairman and enjoys teaching adults, but also teaching youth such as Princess Ella Poulin, of Sidney, how to use a bow and arrow safely. Ella is joining Cub Scouts this year as a Lion. Lion is the youngest level of Scouting and a youth – boy or girl – has to be in at least kindergarten to join. Ella is the Princess of the Great Realm but she and Joe are not related. Too bad for Joe. 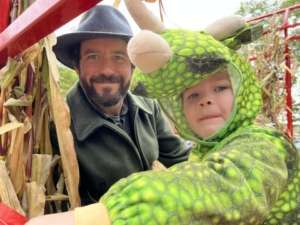 Dad and Dinosaur: Brett LeBlanc and his daughter Violet, of Winthrop, on the hayride tour of Camp Bomazeen. (contributed photo)

Mario is the star of more than 200 video games and some movies and visited Camp Bomazeen from Palmyra. “I’m Liam Casey,” said the young man dressed as Mario. Liam is a Cub Scout from Pittsfield Pack #428 where he is a Tiger Cub. “The haunted house was a lot of fun,” he said. Just like in the game, our Mario had no trouble finding his way through the spooky happenings in the Bomazeen haunted house.

In all, approximately 100 youth and adults attended the event and medical professionals and those who like to pretend to be medical professionals were on hand. Brody Dyer-Dolley was dressed like a doctor for the event and attended with his dad Jacob Dolley. “I didn’t get scared,” Brody said after leaving the haunted house. Brody is a Cub Scout, in Augusta. Augusta Cub Scout Pack #684 had a family camping weekend at Bomazeen and used the Haunted Woods as the Saturday portion of their activities. Scouts and leaders from Augusta Troop #603 dressed up as evil creatures inside the haunted house and served as guides through the darkened interior. 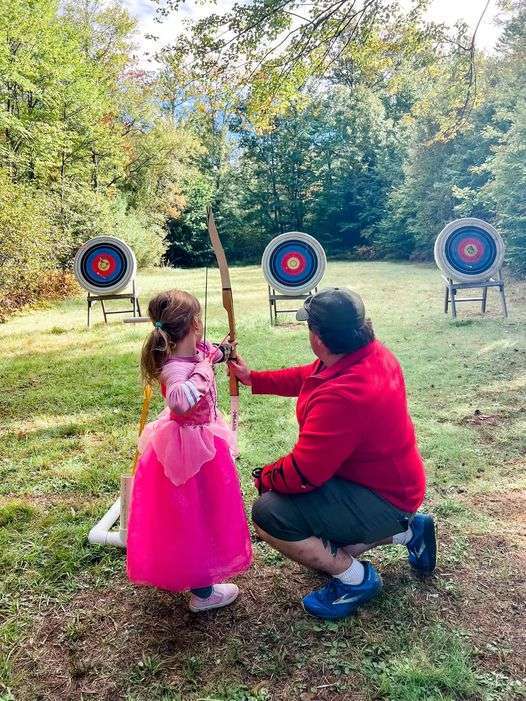 Princess at the Archery Range: Princesses do not just wave anymore. They have to learn to protect their realm. Princess Ella Poulin, of Sidney, received archery lessons from Joe Poulin, of Oakland. There are many Poulins in her kingdom and she and Joe are not related. (contributed photo)