At the July 10 selectboard meeting, L’Heureux said he had two bids on a tandem-axle plow truck and three on a one-ton single-axle plow truck. He recommended the following:

Selectman Ronald Breton said he talked with the mechanics who maintain China’s truck fleet and on the basis of his conversations wants to trade in a 2015 truck that he said the mechanics said is underpowered and already rusting, not the 2008 that he called “the best truck the town has.”

Breton had invited Bill Bickford or one of his employees to the July 10 meeting, but no one was able to come.

L’Heureux replied that as town manager responsible for spending tax dollars, he considered financial factors over the life of each vehicle in making his recommendation. In general, he said, he tries to trade in a vehicle at about 10 years old to maximize value and avoid major repair costs. 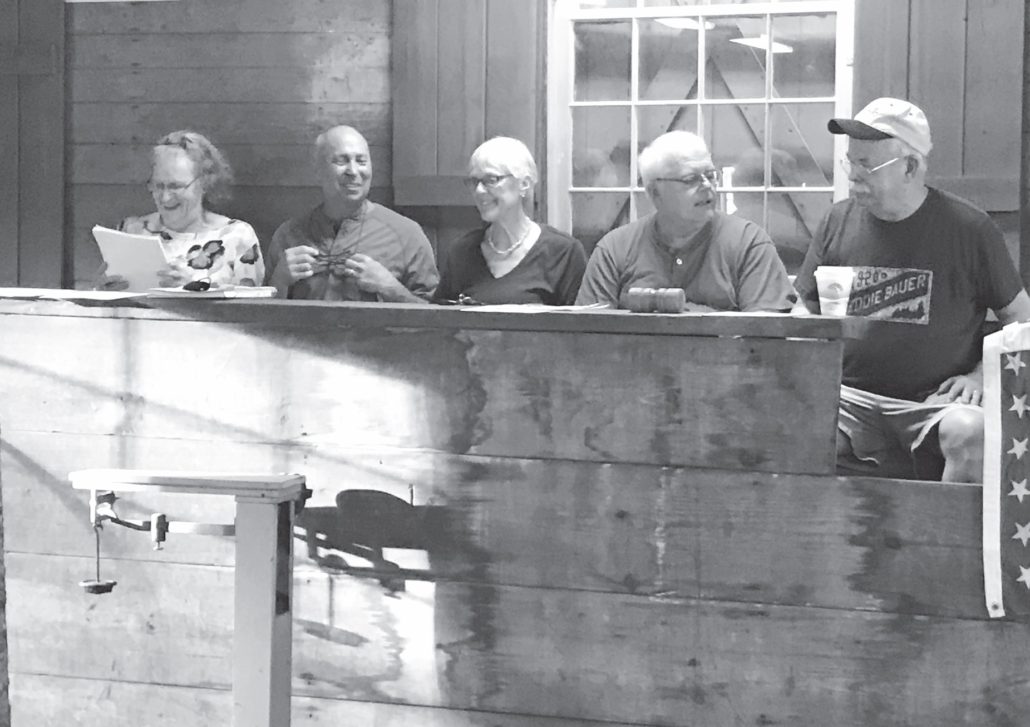 Selectmen met July 10 in the old town house beside the town office. The idea was not a total success; although board members enjoyed looking at historic items before the meeting opened, they found the building too warm and, after dark, too mosquito-infested for comfort.
Contributed photo

The 2008 truck, he said, is at its peak for trading in; in another year, it will lose value, down time will increase and repair bills will mount, especially as outdated equipment becomes more expensive to work on or replace.

The 2015 truck was adjusted after the town bought it and now is “plenty strong enough to do the plowing that we do,” the manager said. It is also more fuel-efficient than an older truck.

Selectmen voted 3-2, with Joann Austin, Irene Belanger and Chairman Neil Farrington in the majority and Jeffrey LaVerdiere joining Breton in opposition, to accept the manager’s recommendations.

In other business, L’Heureux said road repaving is likely to start by mid-August. Work is to be done on Dirigo, Hanson and Bog roads and Parmenter Terrace. The manager said owners of two private roads piggy-backed on the town’s paving bid to get the lower price associated with a larger contract; the road owners will pay for the work done on their roads. Selectmen authorized the manager to sign necessary documents to complete two voter-approved actions: purchase of land adjoining town-owned land around the town office; and transfer of the former portable classroom, now stored on the town’s Alder Park Road property, to the South China Library Association, which will pay the cost of moving it.

L’Heureux said Jack Lord has designed a septic system for the first former portable classroom, set up near the town office as a future emergency shelter, and he has quotes for doing the work. Selectmen also plan a new well to serve the emergency shelter and, they hope, the town office. The current well is contaminated from the salt pile that stood behind the town office for many years; selectmen hope to find better water elsewhere on the enlarged property.

Selectmen appointed Robert Batteese a member of the Revolving Loan Fund Committee. L’Heureux plans to advertise for a secretary for the budget committee and members of the bicentennial committee that Farrington heads.

Farrington said he intends to add internet service and a handicapped ramp at the town-owned former Weeks Mills schoolhouse and use it as bicentennial headquarters.

At Farrington’s suggestion, selectmen met July 10 in the old town house beside the town office. The idea was not a total success; although board members enjoyed looking at historic items before the meeting opened, they found the building too warm and, after dark, too mosquito-infested for comfort.

The next China selectmen’s meeting is scheduled for Monday evening, July 24.