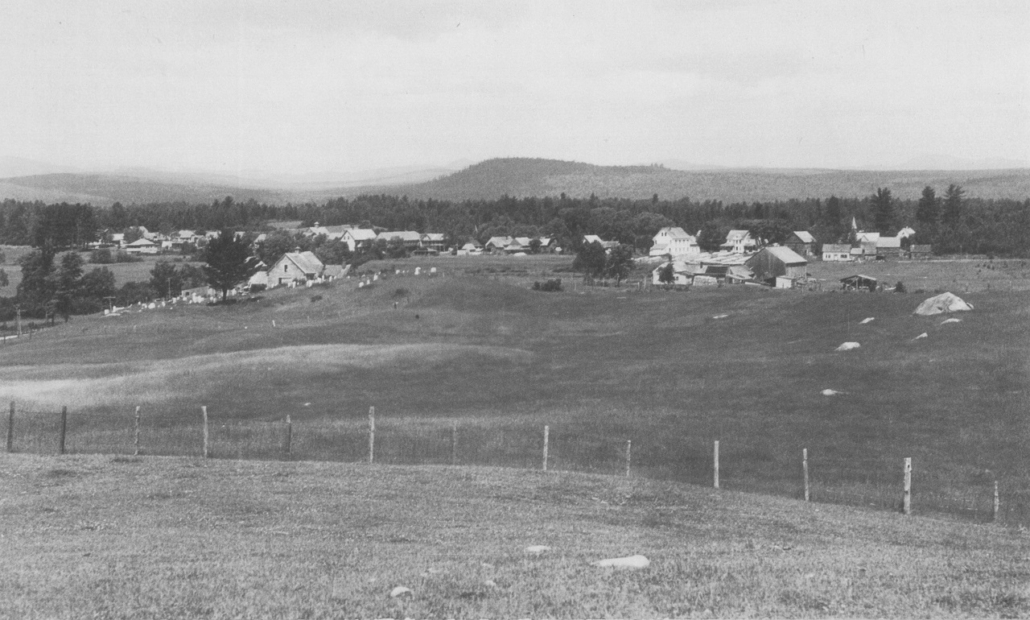 Flagstaff circa 1947. Three years later, whatever was left behind from three towns was buried under 80 billion gallons of blue water. (photo from Saltatavist.com)

Have been looking through my old scrapbook about living in Flagstaff in the time before having to move because of the dam that was being built and reading about all the fires that threatened us. Some were worse than others: One of the old papers that I have reads: Farm Homes Destroyed. Flames which consumed three farmsteads and several small camps in the Dead River region brought on an evacuation. About 37 families were said to have left their dwellings. Meanwhile Burbank, armed with a portable pumper, defied the flames and refused to leave his Dead River home.

He lives with his wife, son and visiting daughter at the upper end of Dead River Plantation, about one fourth of a mile from Route 16. At times the buildings were encircled by nearby fires, but Burbank kept the dwellings well watered down with the pumper. Water is obtained from the Dead River in the rear of his home.

Nine permanent families and several power project workers made up the evacuation. Furniture Piled High: The furniture of about 17 families was piled high in the yard of Robert Hall, a former town officer of the Dead River, who recently moved to Lexington. Huge billows of smoke shrouded 4,150-foot Mt. Bigelow and observers were unable to determine how far up the peak’s side the flames have reached, according to the Associated Press. The smoke was visible in Bingham, 20 miles distant.

Another fire in Flagstaff that was printed starts with these words: On Thursday afternoon fires began to get out of hand and by 5 p.m. the fire above the village had advanced to the Walter Hinds’ farm, a distance of a mile, with a strong wind blowing the flames and smoke swiftly toward our town. It looked very serious for about an hour and many were the boxes and suitcases packed with valuables to be ready for instant evacuation of our homes. But a slight shift in the wind and quick action of the firefighters changed our fears to just concern. On Thursday and Friday the same thing happened – morning would find us hopeful that at last the fires were under control. By noon the smoke would be back and rolling in billows and state fire trucks, Central Maine Power men and out of town firefighters would begin rushing about in their efforts to control the fires which threatened to become very serious for the town. Late Saturday afternoon a new fire on the Plains in an old lumbering area began to grow and advance swiftly in spite of all the efforts of the firefighters. Again the road was closed and people began gathering their valuable papers and precious belongings into bags for a quick get away if necessary. A fire at the foot of Flagstaff Pond had advanced to the foot of Jim Eaton Hill and in the old cutting of several years ago, going to the top of the hill and down the east side. It was gaining in seriousness, and the guests at Camp Adeawanda at Springl Lake were evacuated, upon the advice of the fire wardens, to the Green Farm, in Coplin.

I can’t begin to describe how really terrible that time was for everyone during all the fires and knowing that we were going to be driven from our homes because of the building of the dam!

Sorry to write such a dismal column but the proposed Central Maine Power Co. Corridor brings back so many memories. It hurts my heart the most, that so many of our beautiful trees will be cut and it will destroy the beauty of Maine. … with no benefits for Maine people.

In going through all my old papers I came across this e-mail from The Town Line paper dated December 2, 2003. Had not been able to remember when I started writing for it (But it was evidently a letter I wrote asking some questions, like do you want pictures, and if so how often, etc. ?) When Roland called and asked if I wanted to write for The Town Line, I asked him if I should write the same kind of column I had written for the Somerset Gazzette. He said, “Yes”.

Some day when I get time, I’m going to try and figure out all the papers I have written for over all these many years. I have written for The Town Line longer than any other paper and it is fun, (my goodness, I didn’t remember, it has been 18 years! What other editor would let me put in my dead cat’s memoirs?!

And here is this week’s Percy’s memoir. “The Secret of Living”: Make each day a magnificent adventure. Accept the challenges that come your way. Seize each opportunity that you find. Without concern for what others might say. Experience each day with open arms. Savoring both victory and strife. Welcoming the good and the bad together. For only then will you know the joy of life.