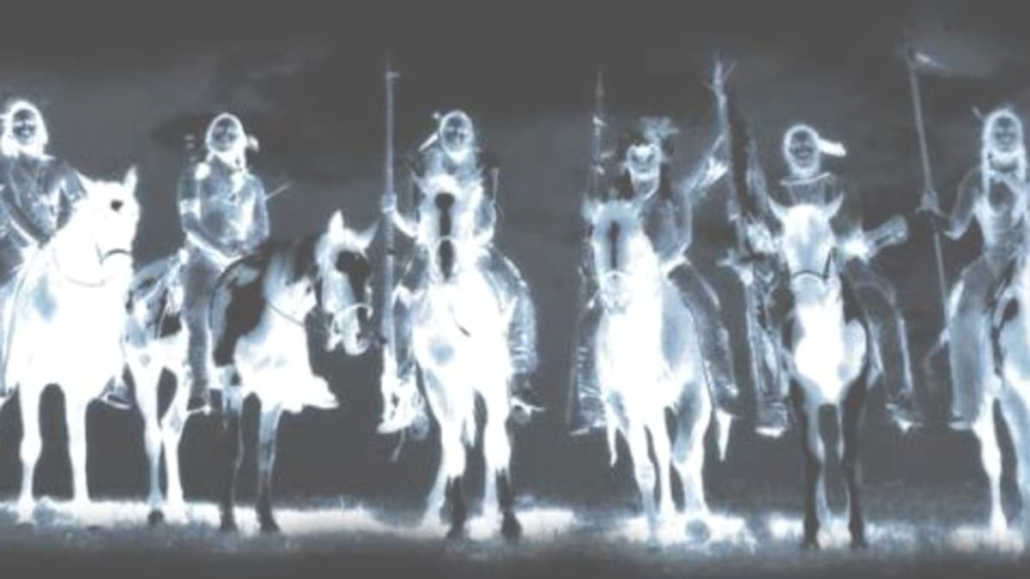 As I promised last week, this will be the conclusion to the story about Uncle Jack’s revenge that began in last week’s paper. The story ended with these words: “This must have been what angered the Great Spirit, because the next morning the white woman was found in a state of shock, the wigwarm burned to the ground and Uncle Jack was gone.

She recovered and told how a huge stone had been rolled from the side of the mountain near the Old Man’s face and a voice had said that the white people would all be driven out and that the valley would be destroyed by fire and water. The soil would never again bear fruit and grass for the white man, and Uncle Jack would roam the slopes of Bigelow Mountain for eternity, as his soul could never enter the happy hunting ground. The poor white woman packed up her business and moved away and Uncle Jack was never seen again in the flesh.

Once in awhile a bit of fog will take the shape of an Indian as it floats across the slopes of Bigelow before it dissolves in the morning sun, and some times the shadow of his canoe can be seen on Flagstaff Lake as he paddles into the sunrise.

In 1950 the entire valley from the foothills of Mt. Bigelow to the base of Blanchard Mountain was destroyed by fire and water. Every white person was driven away. Even the graves were opened and the dead were forced to continue their sleep in another place. All the top soil eroded away and never again will grass and fruit thrive in this once fruitful valley.

Uncle Jack was once again the ruler. His bad medicine had beaten the white man. In 1964 the Flagstaff Corporation bought 8,000 acres of the old Dead River Plantation and made plans for a new town, but Uncle Jack gave them bad medicine all the way.

In 1973 a new plan was made and everything was going well for a four season recreational area. But the spirit of Uncle Jack still hung over the valley.

Consider…..the negative decision by LURC could NOT have been promoted by the testimony against the development given the Sugarloaf Mountain Cooperation and the citizens of the Stratton-Eustis area that was motivated only by jealousy and greed, and get into Somerset County.

The members of LURC could certainly see through this type of thing and would never, never, use their power to support such personal and political reasons. Nor could LURC’s decision been based on the testimony of the Fish and Game Department, with information compiled in 1959, stating that the resort might ruin the hunting and fishing in the area, The hunting and fishing has been ruined for 15 years.

The officials of LURC are mature, well educated people; too smart to be impressed by the testimony of the Natural Resources Council, who are against everything as a matter of principal, and who acted like a group of greedy little boys talking to Santa Claus, and who kept running back time and again to ask for something they had forgotten the first time around.

It seems most likely that sometime when the Land Use Regulation Committee visited the mountain as a group, that the evil spirit of Uncle Jack entered their bodies through the through the holes in their heads and his bad medicine made the negative decision, just as he affected the legislature before they granted Central Maine Power Co. permission to destroy the valley.

I could tell much more about Mt. Bigelow, the Horns Pond and the white woman that seduced away the secret but I wouldn’t dare. I am like many others in the State of Maine. I am afraid of that Eternally Damned Indian that still rules the valley.

I have been trying to find different kinds of stories in the many different papers I have written for over these many years. Hoping to please as many of you as possible. That was the longest one yet. Sorry it took two papers to get it all in, but hope you liked it. Have made many friends and some enemies in writing, I am well aware that you can’t please them all. And quite often someone will ask me, “Are you staying out of trouble”? It brought to mind, the one time I shed tears when some people ganged up on me and I walked out…….telling myself that, “It takes all kinds!”

And here is Percy’s memoir about Challenges: A prudent person foresees the danger ahead and takes precautions. The simpleton goes blindly on and suffers consequences.